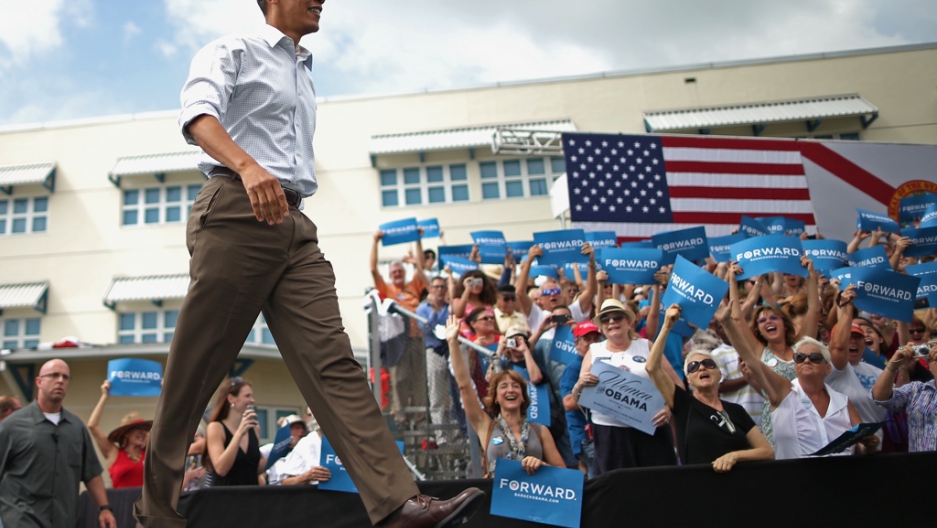 President Barack Obama is upbeat, gaining in the polls after the Democratic National Convention, but Republicans are calling that just a "sugar high." Here Obama is at St. Petersburg College September 8, 2012 in St Petersburg, Florida.
Credit: Chip Somodevilla
Share

CHARLOTTE, NC — Now that both major parties have staged their quadrennial extravaganzas, the serious analytical work begins. Which candidate scored the biggest bounce from all the fuss? What do conventions really mean in modern elections? And last, but by no means least: Which party is the coolest?

To dispense with the first question: after months of stagnant polls and a deadlocked race, President Barack Obama has opened up a clear lead over challenger Mitt Romney. The latest Rasmussen Daily Tracking Poll, released Monday, shows Obama attracting 50 percent of voter support, versus Romney with 45 percent. The number of “undecideds” is achingly small — just 3 percent.

This would suggest that even the Republicans would admit that the DNC was a whole lot sweeter than their bash.

To be fair, the Republican National Convention in Tampa was well-planned, exhaustively organized, and perfectly executed. Even the weather cooperated; Hurricane Isaac skipped Tampa, I am convinced, out of an excess of tact.

No such luck in Charlotte. Blistering heat alternated with torrential downpours, the latter necessitating a last-minute change of venue. The president had been scheduled to speak at the 70,000 capacity Bank of America Stadium; the event actually took place in the regular convention site, the Time Warner Cable Arena, which holds just 20,000.

The results were messy. Tens of thousands were left wandering around asking how to swap their BoA tickets for the arena.

“I don’t belong to any organized party,” Will Rogers once famously said. “I’m a Democrat.”

More from GlobalPost: Obama gets a big bear hug, from a Republican

The GOP may have the wealth, the class, and even the balloons. But the Democrats got soul.

In Tampa, we had Lane Turner, a country western singer who performed a special ditty that became the RNC’s anthem. The refrain, for those fortunate enough to have missed it, was “I built it, with my own hardworking hands; I built it, with no help from Uncle Sam.”

The sentiment, based on a willful misconstruction of an ill-considered sound bite by President Barack Obama, was bad enough.

But contrast Turner’s anodyne lyrics and marionette delivery with Mary J. Blige’s rocking rendition of “One” on the last night of the DNC in Charlotte, and you begin to get the picture.

Even the National Anthem came in for its share of partisan spin. Seven, a musical group that is basically a barbershop septet, did a wonderful job on the Star Spangled Banner on the last night of the RNC. People clapped politely.

But when Amber Riley, who plays the attitudinous Mercedes from “Glee,” hit the “rocket’s red glare” in Charlotte, she had half the hall in tears.

Start talking Hollywood celebrities, and you might even begin to feel sorry for the hapless GOP.

Scarlett Johansson, Kerry Washington and Eva Longoria all turned up in Charlotte to speak words of inspiration and wisdom in support of the incumbent president. Their youth, beauty and sensible exhortations were a marked contrast to Clint Eastwood, the GOP “mystery guest” whose sclerotic rants at an empty chair provided the most talked-about moments of the Republican convention.

It also gave singer-songwriter James Taylor a great line on the last night of the DNC. He came out with a stool, placed it in front of the microphone and said “Don’t worry, I’m gonna sit on it. I know empty chairs make you people nervous.”

He then went on to sing “Goin’ to Carolina,” with every Boomer in the hall humming along.

In the battle of the spouses, I’d have to say it was close. Both Michelle Obama and Ann Romney did a great job of touting their husbands’ qualifications for the White House.

But I’d be tempted to give the edge to the first lady, whose luminous star quality grows brighter every day.

Now when it comes to predecessors … well, W was conspicuously absent in Tampa. But in Charlotte, the Big Dawg shone, when Bill Clinton speaks, people listen. Still.

For the small army of journalists covering the Republican National Convention in Tampa, the arrangements were spectacular. Generous workspace complete with ethernet cables was available even for those outside the CNN/New York Times/Newsweek orbit. There were numerous press briefings, armies of helpers to answer questions, and, most importantly for us poor hacks who were working 18 hours a day, there was free coffee. Cappuccinos, mochachinos and lattes flowed like water, with copious smiles and at no cost.

A reporter would do a lot for a party like that.

Charlotte, on the other hand, was a mess. The torrential downpours were certainly not the fault of the Democratic National Committee, but the lack of workspace and the poor coordination that kept reporters shuffling the mile or so between the media center and the convention site probably were. Facilities were primitive and, not to belabor the point, there was no free coffee.

Protesters, who were kept at a safe and hygienic distance in Tampa, were out in full force in Charlotte. Every journalist and delegate had to run a cordon of pro-life activists, religious fanatics and other angry folks to get into the convention.

But there sure was a party.

Elephants are a bit stodgier than Donkeys. Watching the middle-aged, overwhelmingly pale-faced crowd in Tampa trying to swing to the Oak Ridge Boys was painful.

But the more diverse Dems in Charlotte were having a great ol’ time, with Aretha Franklin blasting from speakers, beer flowing freely and even grannies shakin’ their booty.

“Can you imagine the Republicans getting this hyped up over anything?” asked Lily Hall, a young Charlotte resident, sitting in a diner late at night after the close of the convention. “I mean, this was awesome.”

Hall and her two friends had been among the lucky few who were able to parlay their stadium tickets into spaces in the arena Thursday night. “I never thought I could be in the same room with all those great people,” said Hall.

The college student was open and forceful about her preferences on the political front.

“How could anyone vote for Romney or that good-looking VP of his?” she asked. “They hate women. Obama has made it possible for me to go to school, to have health care, and to be able to afford contraception, even as a student,” she said. “Paul Ryan, on the other hand, is a tool.”

That leaves the third point: What are conventions good for? They no longer actually choose candidates – gone is the era of the smoke-filled room, where powerbrokers decide who will lead the nation. The process may not be much prettier today, but it is at least a bit more transparent. By the time the conventions roll around, everyone knows the outcome.

But hey, judging by the latest polls, it may have worked.