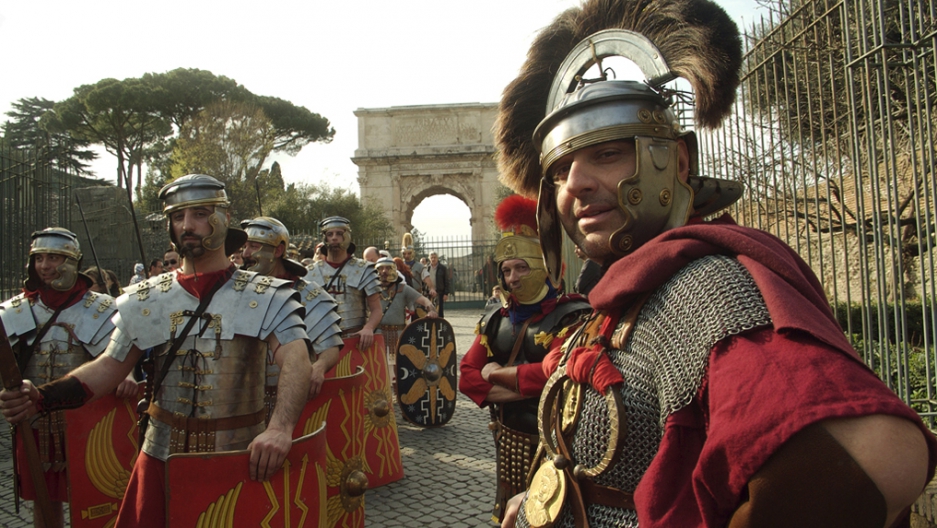 Giorgio Franchetti and his fellow SPQR group members rest after marching through the Roman Forum. Franchetti says current Romans should protect the legacy of their city by keeping the memory of ancient Rome alive. (Fulvio Paolocci/GlobalPost)
Share

An ancient Roman cavalry mask will be displayed at London's Royal Academy this month, an impressive addition to a collection of bronzes that will span 5,000 years.

Why is the Crosby-Jarret cavalry mask, named for where it was found, so interesting? For one thing, it's a recent discovery: the mask was only unearthed in 2010, says the Telegraph, by a treasure-hunter with a metal detector from Cumbria.

Further, the Crosby-Jarret mask has a smidgen of controversy about it. When first discovered, a Carlisle museum attempted to purchase it so it could be put on public display - but a private collector bought the mask for a cool $3.5 million instead, says the BBC.

For another, this Roman ceremonial mask is very rare, says the Telegraph: only 3 of its kinds have been found in England since records began to be kept. Its impassive face would likely have been coated in silver.

The majestic mask could have been kept behind lock and key forever, but thankfully, said private collector agreed to allow the mask to be displayed in the Royal Academy bronze show.

If you happen to be anywhere near London in the near future and have a healthy appreciation for ancient art, the show promises to be a winner: 150 pieces from around the world will span time periods from the ancient Greeks to Picasso and Rodin.

The bronze will join another remarkable pieces at the Royal Academy show, including the magnificent and above-pictured Chimera of Arezzo, an Etruscan bronze that dates from around 400 B.C.E.

Usually kept in Florence, the statue portrays a strange lion-goat-snake creature, which found its way into classical mythology. Its meaning to the Etruscans remains obscured.