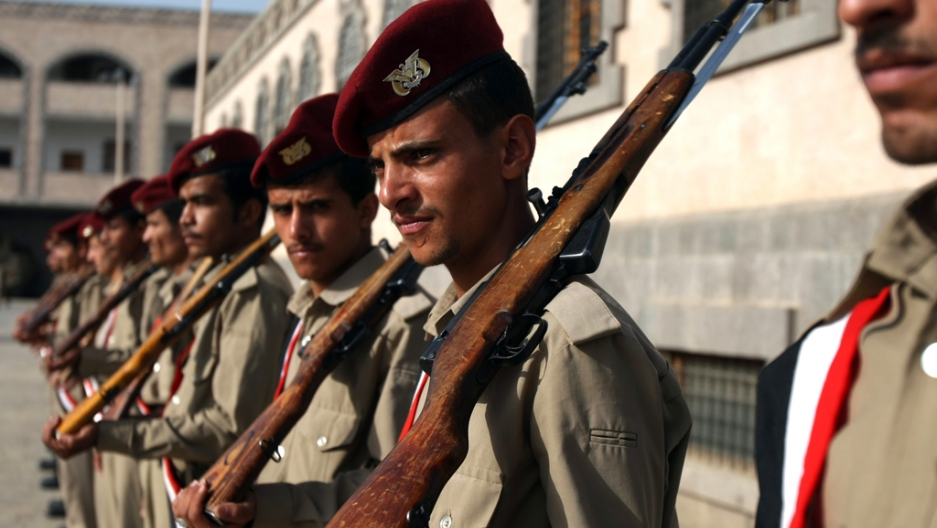 Yemeni soldiers attend the funeral procession of nine police cadets who were killed when an Al-Qaeda suicide bomber blew himself up at the entrance of a police academy, in Sanaa on July 14, 2012.
Credit: MOHAMMED HUWAIS
Share

SANAA, Yemen — Yemen, a stone's throw from Somalia, has for years been the destination of choice for impoverished Somalis fleeing their troubled state.

Now, another kind of Somali is heading to Yemen, and it appears to be swelling the ranks of Al Qaeda.

Somalis belonging to the militant group Al Shabaab have been coordinating with Yemen-based Al Qaeda in the Arabian Peninsula (AQAP) for several years. Al Shabaab sends them fighters who, in a worrisome development for counterterrorism experts, often return with bomb-making expertise that can be used all over Africa.

In March of this year alone, “Al Shabaab sent around 300 Somali militants to Yemen at AQAP’s request,” said Aysh Awas, director of security and strategic studies at Sheba, a think tank in Sanaa, Yemen’s capital.

The guerilla fighters were shipped off to help Al Qaeda in its intensifying struggle against the Yemeni army in southern Abyan province. Al Qaeda wrested Abyan from the government during last year’s political turmoil and managed to maintain control over it for about a year.

The first group consists of refugees who initially fled “the hell in Somalia to seek better economic opportunities in Yemen, but end up being financially exploited and recruited by AQAP,” he said. Somalis are the only nationality granted automatic refugee status in Yemen, which now hosts more than 200,000 of them. Ten thousand Somali refugees have arrived this year alone, according to a June survey by the UN High Commissioner for Refugees.

The other group is made up of “prepared-recruited members of Al Shabaab,” he said. Many of them arrived following the February inauguration of the country’s new President, Abd Rabu Mansour Hadi.

Hadi, who is tasked with unifying the shattered country and reforming its deeply corrupt military ahead of multiparty elections in 2014, has partnered with Washington in the fight against AQAP.

Yet despite the joint military campaign in which American special forces train troops on the ground and US-controlled drones target militants from the sky, Al Qaeda has continued to make advances in Yemen, in part due to the help of Somali militants.

The recent influx of Al Shabaab fighters, who crossed the Gulf of Aden just weeks before President Hadi’s redeployment of US-trained ground troops to the remote province, is only the latest example of the cooperation between the two Al Qaeda affiliates, according to Katherine Zimmerman, a Gulf of Aden analyst at the American Enterprise Institute in Washington.

More from GlobalPost: Al Shabaab branches out beyond Somalia

“Historical trade and smuggling routes that run between Yemen and Somalia tie the countries closely together and have likely served to aid the movement of individuals and material between the two countries,” she told GlobalPost.

Awas dates the origins of the partnership to early 2010, when Al Shabaab announced its alignment with Al Qaeda, though Ayman al-Zawahiri, the global terror network’s current No. 1, did not formalize the union until early 2012.

“Yemen's upheavals, which divided the military and security forces, together with increasing unrest in Somalia, have only facilitated the cooperation between the two parties,” Awas added.

According to Zimmerman, the relationship between Al Qaeda in the Arabian Peninsula and Al Shabaab is exemplified by “documents found at Osama bin Laden's compound that indicate AQAP's leadership served as an interlocutor [between Al Shabaab and] Al Qaeda’s core in Pakistan,” and by “the case of Mohammed Abdullah Warsame — a Somali who received advanced [explosives and military] training in Yemen.”

“One of the threats posed by such ties,” Zimmerman warned, “is the export of AQAP's advanced knowledge, such as its bomb-making expertise, back into Somalia and from there, into Kenya and the rest of East Africa as well as across the Sahel and into West Africa.”

Al Qaeda in in the Arabian Peninsula and Al Shabaab appear to be engaging with Somali pirates as well.

During a GlobalPost visit to Abyan province in July, a Yemeni intelligence official who spoke on condition of anonymity said that, “Somali pirates and the [Al Qaeda] land fighters are closely linked. Pirates are taking over ships and kidnapping, and some of the money from the heists is eventually going to AQAP, which is greatly impacting stability in the region,” he said.

Yet despite the growing evidence of links between Al Qaeda in the Arabian Peninsula and Al Shabaab, Gregory Johnsen, a Yemen expert at Princeton University’s Department of Near East Studies, said the trans-Gulf of Aden partnership remains murky.

“There is still a great deal we simply don't know,” he said. “It is unclear how much of the crossover from Somali to Yemen and back is based on personal relationships between individuals in Yemen and Somalia, as opposed to organizational instructions.”