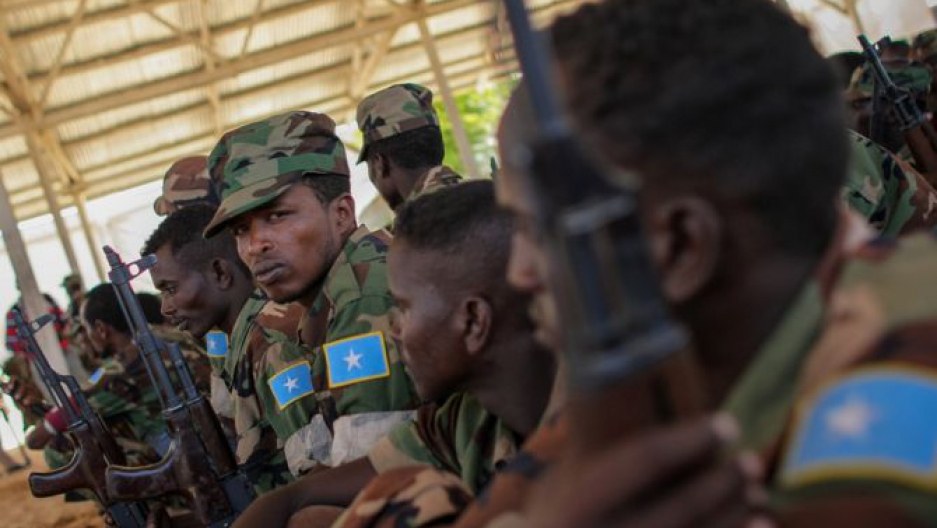 Recently trained members of the Somali National Army (SNA) sitting during a passing-out parade at an African Union Mission in Somalia (AMISOM) training facility on the western fringes of Mogadishu. The SNA has helped liberate large areas and towns of strategic importance across Somalia from the Al-Qaeda-affiliated terrorist group Al Shabaab.
Credit: STUART PRICE
Share

NAIROBI, Kenya — Al Qaeda-inspired militancy is on the rise in Africa as disparate groups with local grievances find common cause in the global terror group’s tactics and ideology and, in turn, offer it new theaters of operation.

Military pressure, drone strikes and the assassination of Osama bin Laden have diminished Al Qaeda globally, leaving it weaker than at any point since its first terrorist spectacular, the 1998 bombing of US embassies in Kenya and Tanzania.

But while Al Qaeda central wanes, affiliates elsewhere are growing stronger, nowhere more so than in Africa, where groups like Al Qaeda in the Islamic Magreb (AQIM), Boko Haram and Al Shabaab are finding ways of hitching Al Qaeda’s ideology to their local struggles.

“Africa represents a fertile ground for diminished ‘Al Qaeda-core’ to re-group, re-energize and re-launch its mission of global jihad," according to a recent report by the Royal United Service Institute, a London-based think tank.

The report pointed to the potential for an “arc of instability encompassing the whole Sahara-Sahel strip and extending through to East Africa.” It warned that Al Qaeda’s new strategy seemed to be “going native,” using local militant groups and their conflicts to gain a foothold in new countries.

But while the report saw the impetus coming from Al Qaeda central, other observers say it is the African affiliates that are in the driving seat.

“Much of this is being driven by the Africans themselves,” Dr. J. Peter Pham, director of the Michael S. Ansari Africa Center at Washington’s Atlantic Council, told GlobalPost.

“They are finding in this ideology, which is not native, a way to transcend the local particularities of their individual fight and invest it with a greater meaning that has purchase beyond their borders,” Pham argued.

Nigeria’s Boko Haram offers a powerful example of a local insurgency adopting the rhetorical and tactical style of Al Qaeda to great effect.

Firmly rooted in the neglect and economic marginalization of Nigeria’s Muslim north, Boko Haram has developed its own signature attacks — the bloody church assault, for instance — but has learned from Al Qaeda in the Islamic Maghreb and Al Shabaab how to build improvised explosive devices and deploy suicide bombers.

Its leaders have two messages: one tailored for locals that addresses local issues and attracts new recruits and popular support; and another aimed at a broader audience, seeking reputational capital and financial backing.

Al Qaeda also has much to gain from alliances with African groups. Territory controlled by allied organizations offer safe havens for Al Qaeda operatives and fighters.

It also gives Al Qaeda “the ability to project the aura of dynamism at a time when they are increasingly squeezed,” Pham said.

This new dynamic is, however, fraught with difficulties for the local affiliates.

“These groups are often caught in a dilemma over whether to remain a locally-focused insurgency force or to become a truly international terrorist organization with a global ethos,” according to the Royal United Service Institute report.

Al Shabaab in Somalia is an example. Analysts have long pointed to divisions, tensions and sometimes outright hostility between the nationalists in the organization and those interested in taking the group global.

Also problematic is the cross-fertilization taking place between Islamist groups on different sides of the continent that, Pham argues, is driving a kind of self-radicalization, as the organizations share expertise and tactics.

More from GlobalPost: Out of Mali's chaos, Al Qaeda rises

The resilience of Al Qaeda ideology was made clear in recent months. Even as Al Shabaab was forced into retreat in Somalia over the last year, a new threat emerged very rapidly in northern Mali, where various Al Qaeda-aligned groups hijacked a local rebellion in March.

The various organizations (Al Qaeda in the Islamic Magreb, Ansar Dine and the Movement for Unity and Jihad in West Africa) managed, in a matter of weeks, to elevate themselves from a band of drug-smugglers and occasional terrorists with lucrative sidelines in kidnapping into the world’s pre-eminent Al Qaeda alliance.

Together they control half of a huge country and are establishing governments, largely unchallenged.

They are well equipped, raising questions about the origins of outside financial backing, and there have been numerous unconfirmed sightings in northern Mali of foreigners from Pakistan and elsewhere.

Earlier this year Gen. Carter Ham, the top US military commander for Africa, warned of the triple threat Al Qaeda in the Islamic Maghreb, Boko Haram and Al Shabaab present.

“What really concerns me is the indications that the three organizations are seeking to coordinate and synchronize their efforts,” he told the Washington-based Africa Center for Strategic Studies in June.