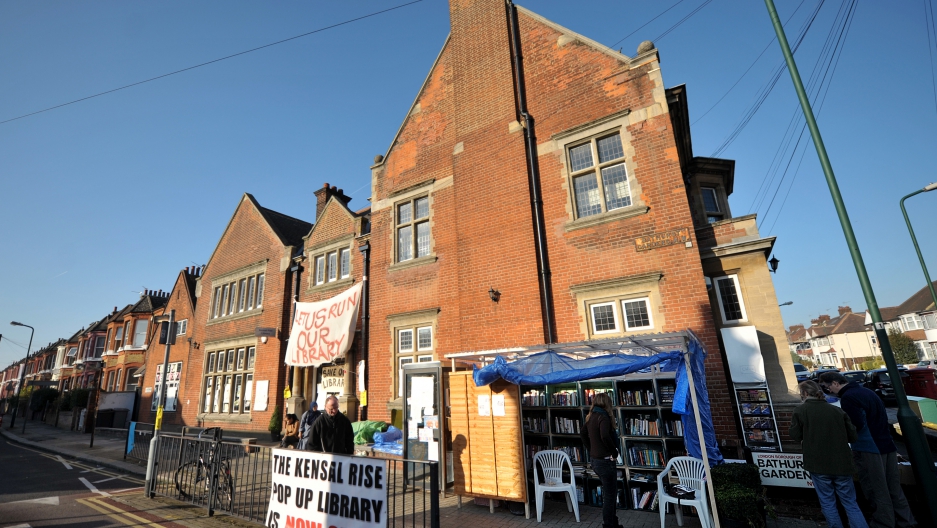 LONDON, UK — One possible consolation from the so-far unsuccessful battle to save the Kensal Rise library is that the story could someday provide material for a good book.

Midnight raids, celebrities and historical figures would make for a surefire page-turner — one that’s still a cliffhanger. It would also reflect how Britain’s economic woes are destroying institutions their supporters say are key to sustaining the country’s rich artistic legacy.

A redbrick Victorian structure tucked away in a leafy suburb of northwest London, Kensal Rise library is among several hundred small book-lending facilities across the UK that have been shut down or marked for closure in recent months.

Campaigners hoping to keep them open say the facilities have been wrongly identified as soft targets by local authorities seeking to reduce expenses after their budgets were slashed by up to 30 percent under a government program to drastically reduce the country’s debt.

But if officials believed they would be able to dispose of them quietly, they were mistaken. Library regulars may prefer silence among bookshelves, but they make a lot of noise when they’re taken away.

More from GlobalPost: Did the Europan Central Bank just save the euro?

None more so than the patrons of Kensal Rise, one of six libraries marked for closure in the London borough of Brent.

Zadie Smith, Alan Bennett and Philip Pullman — whose “Golden Compass” children’s book was made into a film starring Nicole Kidman — have joined other popular British authors condemning the plan, as did Brazilian writer Paulo Coelho.

“A lot of it is down to history,” explains Jodianne Chen Gramigni, a spokesperson for a community group called Save Kensal Rise Library campaign.

The library was opened in 1900 by Mark Twain, who spent time in the area during a lengthy overseas stay to avoid creditors back home. Andrew Carnegie donated funds to expand it in 1903.

The building escaped World War II with only minor damage. It survived numerous attempts to shut it down after it was placed under the control of the local authorities in the 1960s — until 2010.

Kensal Rise’s popularity with writers helped thrust it into the media spotlight, Gramigni says, together with its location in a sprawling residential area also home to many low-income families.

“The area doesn’t have any other real community focal points,” she said. “But we have this rather remarkable structure of modest architectural value which stands out in a sea of ordinary housing, and people cherish it quite a bit.”

“Cherish” may be an understatement. When the authorities first sent workers to board up the premises last year, residents mounted a round-the-clock vigil to stop them. In May, they formed a blockade to prevent the removal of books.

The shelves were later cleared only under heavy police protection.

Although it now stands empty, the library hasn't been neglected. Posters opposing the closure adorn the building’s main doors. A plywood “pop-up” library erected by residents holds hundreds of donated books and provides a small space for children to read and play. Passers-by check opening hours on a white board.

Brent Council insists the Kensal Rise closure is part of a well thought-out plan to rationalize its library service and meet the demands of the 21st century. With book borrowing in decline, it is spending money to upgrade stock, infrastructure and internet facilities at its remaining libraries.

That argument has been used to justify closures elsewhere in the UK — a total of 245 of 4,000 libraries are reportedly under threat across the UK.

“It’s not surprising libraries should be affected,” says Laura Swaffield, who heads the independent Library Campaign pressure group. “No one dies if you close a library. So they're getting more than their fair share of cuts.”

She says the closures particularly affect children. “If they miss out on going to a library, they miss out for the rest of their lives.”

Although the Conservative-led government implemented the cuts, campaigners say the opposition has offered little more than lip service, particularly in Brent, which is controled by the Labour Party.

“I’d hate to pin it on one political group,” Gramigni said. “They’ve all been atrocious. They’ve tried to pin the blame on each other and use it for political point-scoring.”

Zadie Smith, an award-winning novelist who grew up in northwest London and frequented Kensal Rise, has said library access is about equal opportunity. “I owe my whole life to books from libraries, so it’s hard to know where to begin,” she told the BBC. “It was a way out of the [apartment]. A way of seeing different kinds of life, different ways of thinking. It ended up being a way to become educated and finally a way to get to university and get out.”

There are glimmers of hope. While the government has refused to involve itself in local disputes, some communities have managed to reverse or reduce closure programs.

In Kensal Rise, the residents aren’t done fighting. The library building has reverted to the control of the land’s historical owner, Oxford University, which has put it on the market.

The Save Kensal Rise Library campaign, which has raised $111,000, hopes to convince the university the community has the financial means to reopen the building to the public and that — to borrow from Mark Twain — rumors of its death will have been greatly exaggerated.