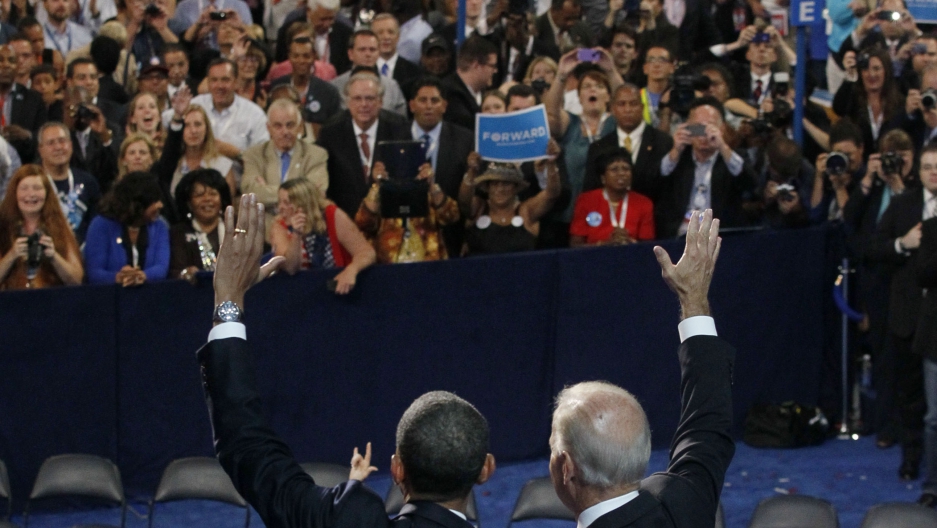 Political conventions are all about the speeches and the strategic messages being sent out to the American people.

After three long nights of speeches at the Democratic National Convention, thousands of words were uttered on stage.

Some words, as anyone who listend to Joe Biden Thursday night can attest, were heard more than others. On Twitter, there was considerably discussion of Biden's use of the words "literally" and "folks" — so much so that his word choice garnered almost as much attention as his actual speech.

But there were other words that stood out in speech after speech. The New York Times took a tally of these words, based on analysis of transcripts from the Federal News Service.

But other words, like "guns," and "Syria," were not mentioned once. Takeaway Washington correspondent Todd Zwillich said he heard from Democratic conventiongoers who were upset they didn't hear more about voting rights, and others who wanted to hear more about the environment and greenhouse gas emissions.

"Environmental issues were one I heard a lot about," Zwillich said. "A lot of conventiongoers said this used to be a major platform of the Democratic Party. Global warming, climate change, sure, but renewable energy, solar."

Zwillich said they were all mentioned but he heard from people who felt no one was talking about them in a serious way.

"Solyndra has really been some effective Republican messaging," he said.

But more than environment, even, which was discussed briefly, almost no one made any mention at all of gun control. Zwillich said that in and of itself was surprising, given how many multi-victim shootings were reported in the days and weeks leading up to both conventions.

"Often in our political culture, we react to events like that with calls for gun control. That seems to be over in this political time," Zwillich said.

Moving on from the conventions, debates will be the next chance for candidates to speak to large numbers of candidates. Zwillich said environmental issues may come up, as will voting rights questions, while gun control almost certainly will not.

But some Democrats expressed concern that there wasn't more discussion of Obama's drone policy overseas. National Security policy, possibly including drones, will almost certainly be a topic at the debates, Zwillich said.