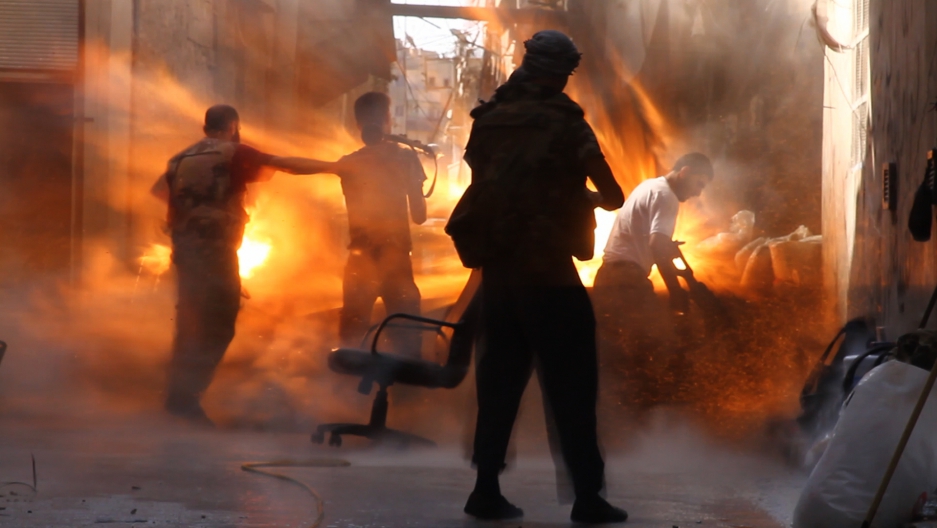 ALEPPO, Syria — Their names were Issa, Ahmed and Sheik Mahmoud Qasim. They were fathers and brothers. They were students, teachers and laborers.

And, last week, they were all killed by tank fire.

They are not alone. The Syrian conflict has now dragged on for 18 months and cost the lives of tens of thousands of people. The dead represent all kinds — civilians, rebel fighters, regime soldiers and officials, aid workers, activists, journalists.

Headlines that track the numbers of dead are easy to pass over when they are so frequent. But sometimes a moment is captured that communicates the tragedy of events in a way that is impossible to ignore, or forget.

In this video and photo series, GlobalPost senior correspondent Tracey Shelton tells the story of Issa, Ahmed and Qasim in the days before, and then at the very moment, they are killed in their back-alley post on the front lines of Aleppo, Syria:

On the morning of their death, the men joked as they cleaned their post from a tank attack the day before. That time, they had been prepared and the tank had fired too short. This time, the assault came with little warning. Within seconds, the tank blast strikes.

As the cloud of smoke engulfed the street, one man took cover, frantically waiting for the others to emerge through the dust and debris. No one came. In that instant, three men were reduced to broken, bleeding masses. It took several minutes before the dust cleared enough to check for more survivors. There were none.

After a few minutes of disorientation, a vehicle arrived to transport the bodies. The survivors washed away the blood and flesh in a heartbreaking clean up.

New fighters came to take their posts. And the battle continued.