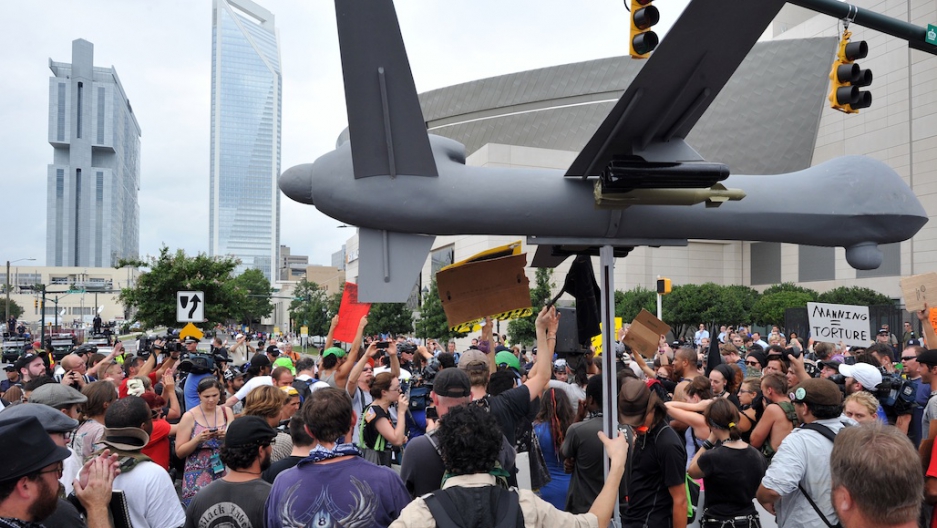 Protesters carry a replica of military drone during a demonstration in Charlotte, North Carolina, on Sept. 4, 2012, ahead of the opening of the Democratic National Convention.
Credit: MLADEN ANTONOV
Share

A Pentagon official confirmed Wednesday that the US Department of Defense has identified 66 countries it considers eligible to purchase drones exported from the United States, Reuters reported.

The list was drafted in Defense Department policy documents in 2011, Richard Genaille, deputy director of the Pentagon's Defense Security Cooperation Agency, said during a defense industry conference in Washington, DC, according to Reuters. Genaille did not name the countries.

Congress and the State Department have not yet cleared the way for all of the countries the Pentagon lists to buy drones, according to Reuters.

Exports of the "unmanned aerial vehicles" known as drones could help boost profits for arms makers, who are anticipating leaner times after Defense Department budget cuts.

More from GlobalPost: Drone Wars: Is it legal?

US weapons exports have already been growing significantly in recent years. A Congressional Research Service report released last month said that the US made more arms transfer agreements worldwide in 2011 than did any other country, with the deals amounting to $66.3 billion.

"This is the highest single year agreements total in the history of the US arms export program," the report stated.

The use of drones by the US has been a controversial practice, and a topic of protest at the Democratic National Convention held in Charlotte, N.C. this week, according to the Associated Press.