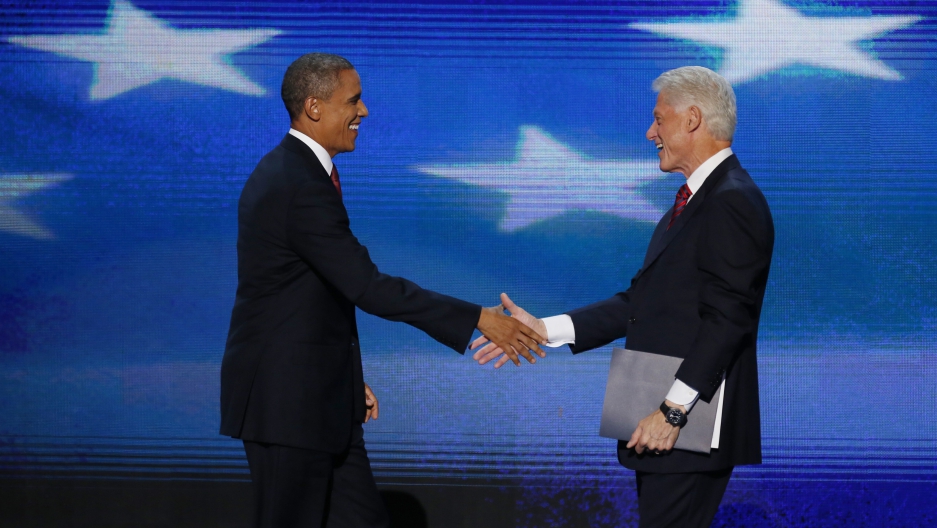 He coupled that with an indictment of Mitt Romney and Paul Ryan, Obama's Republican challengers, and the agenda of the Republican Party.

At the conclusion of his speech, Clinton, who served to formally nominate Obama to be the Democrats' nominee as president in 2012, was greeted on stage with a hug from Obama, making his first appearance at the convention. Clinton made a slight bow to Obama before they waved to the crowd and greeted those standing nearby.

Clinton's speech, which was delivered in large part off-the-cuff but brimming with facts and perhaps more substantive policy than has been heard in primetime at either convention, touted Democrats' record on job creation and lauded Obama for doing better with the problems he found than any other president could have.

"Is the president satisfied? Of course not, but are we better off than we were when he took office?” Clinton asked as the crowd cheered, before answering his own question. "The answer is yes."

Clinton was invited to speak by Obama himself, according to media reports, and underscores the bridge that has been built between the two presidents after a divisive primary in 2008 that saw Obama beat Clinton's wife in a tough battle.

But the speech also game Clinton a chance to burnish his own legacy a bit and perhaps elevate the already-high stature of his wife — just in case she decides to run for president one last time in 2016. Hillary Clinton, who is 65, has said she will step down from her position as secretary of state in January and has no intention of seeking election again.

In praising Obama, Clinton touted how he'd reached out to former rivals, including Hillary Clinton, in putting his cabinet together. And jointly they, he said, recast what American diplomacy means.

“Democracy does not have to be a blood sport,” Clinton said. “It can be an honorable enterprise.”

It was Clinton's eighth speech to a Democratic National Convention — perhaps the last. Clinton has been increasingly talking about and thinking about his own mortality, though he's also switched to a vegan diet that he says has made him much healthier.

Obama will close the convention Thursday night with his won speech to the assembled delegates. The speech had been planned for Bank of America stadium — a football stadium seating some 70,000 — but was moved back to Time Warner Arena with the rest of the convention business because of the threat of rain.