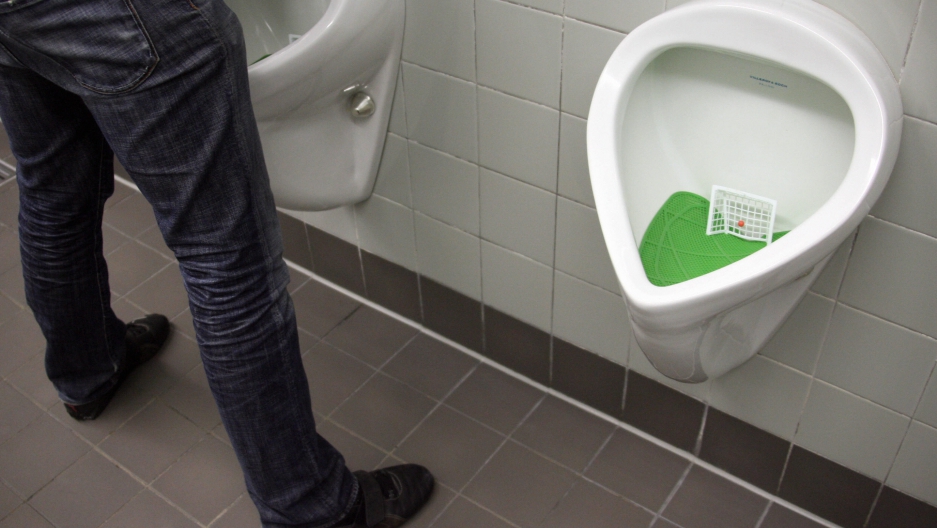 The soccer-theme urinals of the German Football Federation Media Center of the World Cup International Broadcasting Centre in Berlin ahead of the 2006 Fifa World Cup. Will the "German urinal" become an oxymoron?
Credit: MARCUS BRANDT
Share

What’s this world coming to?

A friend I’ll call Peter shook his head in disbelief when his German girlfriend decided to “train” him to sit while urinating.

Things were going quite well between the couple, until the day she saw his upright silhouette through the semi-see-through door to the bathroom and freaked out: “Oh, no! Peter, please sit while using the toilet. Where do you think you are? In the woods?”

“The urinal is the last remaining bastion of proper machismo. The one place where women haven’t been trying to get equal,” he argued. “And now we don’t even have that.”

Peter, an American man who had just turned 30, was so shocked by the idea that German women expect men to sit down while peeing, he had to move back to the US.

Well, there were other things standing between them — besides himself urinating — to be honest.

But the emasculation process definitely started there, with his upright silhouette looming carelessly behind the bathroom door. He probably didn’t put the toilet seat down, either, but that’s a whole other conversation.

Since then, I have heard quite a few men complain about being forced to sit while urinating. Granted, the complains typically come from American men traveling to countries where it‘s the norm, but still. Since Americans are typically the ones feeling superior about their hygiene habits — constantly pestering Europeans for not showering enough — chances are the sitting-while-peeing-because-it’s-more-hygienic habit might cross the Atlantic very soon.

Hopefully, though, it won’t become a political issue, like it is in Sweden these days.

The Left Party in Sörmland is taking a stand to ensure men take a seat when emptying their bladders. Viggo Hansen, a substitute member of the county council and the man responsible for the proposal, wants to start by having the council’s office toilets to be genderless and is pushing for the "sit-down only" requirement, The Local reports.

According to the article, the party claims there are two very important reasons why men sit when they urinate:

The Left Party proposes making the change gradually. They want to first label toilets which are designated for men who absolutely want to remain standing when they pee.

One can only wonder what the labels will say. Die-hard standers? The upright brigade? Perhaps they should just go with pictorials.

Stephen Shen, the country's Environmental Protection Administration minister, has said that sitting on the creates a cleaner environment.

Apparently, some of Taiwan's estimated 100,000 public toilets — regularly graded for cleanliness — are still smelly due to urine spatter. He is suggesting that men sit at all toilets, public and private.

Sweden, it appears, is the poster child for peeing seated globally.

Here's how the BBC reported the story:

"We want to learn from Japan and Sweden," said Yuan Shaw-jing, the director general of environmental sanitation and toxic substance maintenance at the environment ministry. "In Japan, we heard 30 percent of the men sit," he told BBC.

So Taiwan just joined a growing list of countries where men standing while peeing are becoming a thing of the uncivilized past.

Remember when children rode bicycles without helmets? When women didn’t wax their pubic hair? When people got their news from newspapers? When men used to stand while urinating? That kind of thing.

Although, arguably, sitting while peeing has little to do with modernity.

Islam, for example, has always endorsed taking a seat. To be precise, it is not haraam (sinful) for a man to urinate standing up, but it is Sunnah (the way Prophet Muhammad would do it) for him to urinate sitting down, at least according to the very informative Islam QA Web site:

“Aa’ishah (may Allaah be pleased with her) said: ‘Whoever tells you that the Prophet (peace and blessings of Allaah be upon him) used to urinate standing up, do not believe him. He only ever used to urinate sitting down.’ And because this is more concealing, and it reduces the risk of any drops of urine splashing up onto him.”

Is it clear now or are you still not convinced about the sinfulness of urinating in the upright position?

I wonder how long it would take to get the entire global male population potty trained?

And, more importantly, should we even go there?