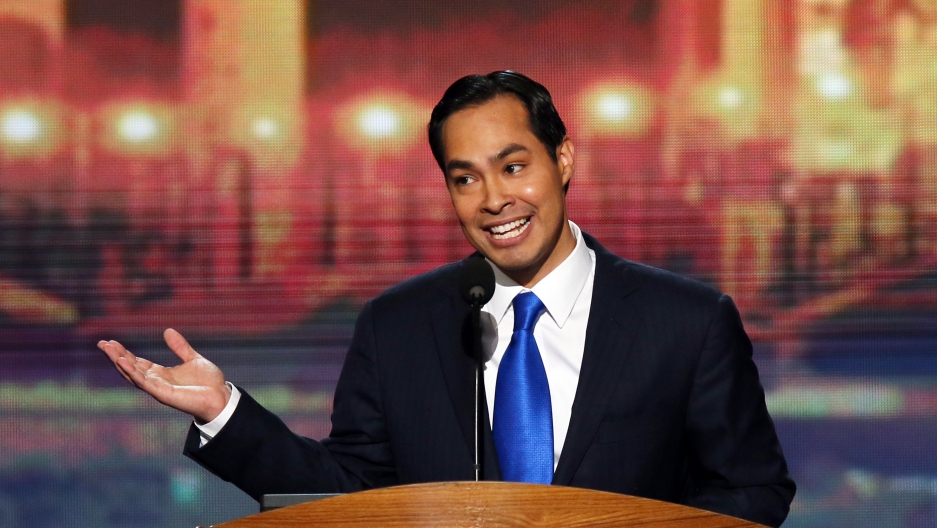 CHARLOTTE, NC — Young, brilliant, and breaking down ethnic barriers: the parallels with Barack Obama are obvious. And when Julian Castro, the 37-year-old mayor of San Antonio, Texas, took the stage at the Democratic National Convention Tuesday night to deliver the keynote address, there was a very clear jolt of electricity in the hall.

Castro was the first Hispanic politician to be given this coveted spot, and he did not disappoint. To an adoring and appreciative crowd, he made a bold plea for the nation to stand with Barack Obama come November. He also took on, quite directly, Republican challenger Mitt Romney and his running mate, Paul Ryan.

Romney “just doesn’t get it,” insisted Castro, but Barack Obama does:

“This is the choice before us … Our choice is a man who has always chosen us. A man who already is our president, Barack Obama.”

These were powerful words, and the audience responded with gratitude.

Castro and his twin brother Joaquin, also a politician, were born in San Antonio in a working class family. Their grandmother, an immigrant from Mexico, never finished grade school, and worked her whole life as maid and a cook, scraping together enough money to send her only daughter to college. Her grandsons went further — to prestigious universities where they studied law and decided to enter public service.

Castro brought a stirring message to a demographic that the Democratic Party is actively courting — the Hispanics who now make up more than 16 percent of the population.

The Democratic Convention has drawn a record number of Latino delegates, according to news reports, and there is an active push to get them more involved.

The convention will also feature rallies, caucuses and other gatherings where Latinos can flex their political muscle.

“We are trying to let the Hispanic voice be heard,” said David Fernandez, a delegate from Tampa, Fla. “The Hispanic vote is far more powerful now than we ever imagined possible. It can swing elections, especially in crucial states like Florida.”

Battleground states like Florida, Colorado, even North Carolina have significant Latino populations that could play a determinative role in a close election.

Hispanic voters went overwhelmingly for Barack Obama in 2008 and polls show the trend continuing. Obama holds a greater than 2 to 1 advantage over Republican challenger Mitt Romney.

The GOP has sought to narrow the gap.

Last week at the Republican National Convention in Tampa, speaker after speaker took the stage to insist that the GOP was the true party for hard-working, success-oriented Hispanics. New Mexico Gov. Susana Martinez and Florida Sen. Marco Rubio were featured prominently in the lineup. But Democrats like Fernandez were not impressed.

“The Republican Party is starting to see the importance of having Latino support,” he said. “But even their elected officials do not represent the values of Latinos. I am a Cuban American myself,” Fernandez said. “And I am proud that we have a Cuban-American senator in Florida. But that does not mean I always agree with him.”

Rubio, said Fernandez, has serious limitations in his views on immigration, which do not endear him to the wider Hispanic community.

For delegates like Fernandez and his fellow Floridian, Christoph Cano, Julian Castro’s address has doubtless provided a rallying cry for their efforts to re-elect Obama in the fall.

There were some lovely moments during Castro’s speech, such as when the camera fixed on his mother just as Castro was saying how proud he was of her. But it was Carina, his 3-year-old daughter, who stole the show, mugging for the cameras and provoking cheers and laughter just as her father was waxing poetic.

More: GlobalPost's coverage of the US election campaigns