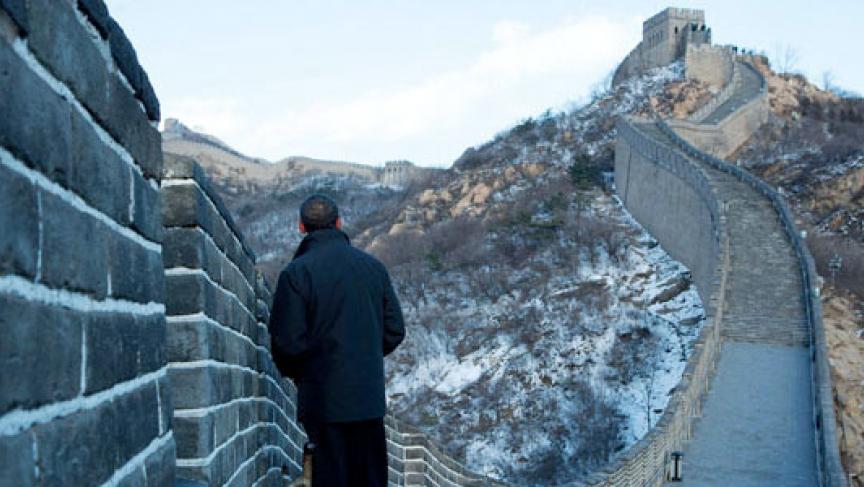 President Barack Obama tours the Great Wall during a trip to China in 2009. (Photo courtesy of the White House.)

President Barack Obama laid out a new vision for American foreign policy last November — a shift in focus from Iraq and Afghanistan, toward Asia.

Speaking to the Australian Parliament in Canberra, the president explained just why such a strategic shift is necessary.

“With most of the world’s nuclear power and some half of humanity, Asia will largely define whether the century ahead will be marked by conflict or cooperation, needless suffering or human progress," he said. "As president, I have, therefore, made a deliberate and strategic decision — as a Pacific nation, the United States will play a larger and long-term role in shaping this region and its future.”

The president spoke of cultivating stronger military ties and economic partnerships in the Asia Pacific region. He said the U.S. will promote civil societies and the advancement of the rights of all people in places like Burma and talked about combating piracy and extremism in Indonesia.

The president and other administration officials have taken to referring to this new strategy as a “pivot” toward Asia.

Bhaskar Chakravorti, a senior associate dean at The Fletcher School at Tufts University, said this pivot was unavoidable.

“A pivot towards Asia is centered on the 800-pound, or the 1600-pound gorilla in the room, which is China," he said. "And the question about China has to do with how do we both compete with and collaborate with, and help and get help from China all at the same time?”

“What that involves is having a presence in Asia so that I can do business with China, I can keep close tabs on what China is up to, and then also make friends with other parties, other countries in Asia that potentially could become part of China’s orbit, or want to get away from China’s orbit, in which case they would rush to embrace the U.S.,” he said.

The pivot toward Asia is becoming possible as the U.S. winds down commitments in Iraq and Afghanistan, and as U.S. influence in parts of the Middle East is on the wane.

But could a second-term Obama Administration pull off its new Asia policy? Aaron Friedberg, a professor of politics and international affairs at Princeton University, said it’s a matter of resources.

“Obviously there are going to be significant cuts in the defense budget, so it’s going to be tough for the United States to spend more money on maintaining its own forces in East Asia," he said. "I think we’re going to try, but the administration may not have the resources to do as much as some people think that it should.”

So while Friedberg said the Asian pivot is a good idea in theory, thus far he hasn't seen much substance.

“Most of what the administration has done has been talk, and talk is important, but it has to be backed up with actions," he said.

Friedberg is also an Asia-Pacific advisor to Republican presidential nominee Mitt Romney, though he emphasized he wasn't speaking for the Romney campaign.

"If you look back over the last 20 years — since the end of the Cold War, both Republican and Democratic Administrations, starting with George H.W. Bush and then down through the Obama Administration — have pursued a mixed strategy towards China," Friedberg said. "Engagement, on the one hand, in economics, certainly, diplomatic engagement and so on, and on the other hand efforts to maintain a balance of power even as China grows stronger. So I think there is likely to be more continuity than change, whoever is elected in 2012.”

Friedberg said it’s his sense a President Romney would “perhaps” go somewhat further in strengthening the U.S. position in the region and might be tougher toward China on economic issues.

But Chakravorti at Tufts, who identified himself as an Obama supporter, thinks a President Romney would be far more constrained in Asia.

"Mitt Romney, if he does get elected, will do so on the single issue of jobs back home," he said.

Of course, any future strategy in Asia, for any president, is subject to the real world. After all, global events have a way of intruding on policy plans, no matter who is making them.