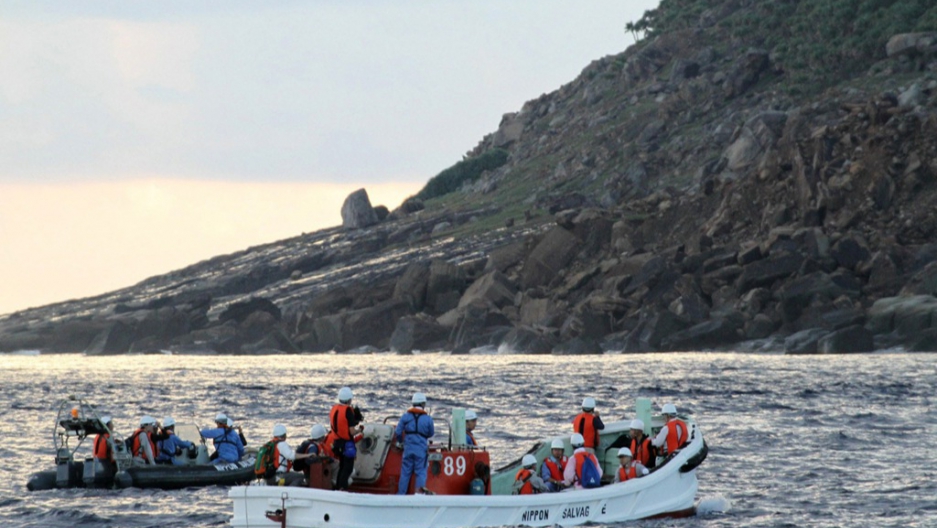 A team of Japanese surveyors on September 2 sailed to a group of disputed islands in the East China Sea. Japan has reached a deal to buy the disputed Senkaku Islands on Wednesday from their private owner, the Kyodo News agency reported — citing "government sources."
Credit: JIJI PRESS
Share

GWANGJU, South Korea — By reportedly agreeing on a price with the private owners of three disputed islands in the East China Sea, Japan is unlikely to silence criticism from China, which also claims the territory. But it may have averted an even bigger diplomatic falling-out.

The ongoing struggle centering on the Senkakus — a group of islets that China calls the Diaoyu — took another twist on Wednesday when Japanese media reported that the government is to buy the islands for 2.05 billion yen ($26.1 million) from the family it has leased them from since the 1970s.

Citing government sources, the Yomiuri and Asahi newspapers said the deal between the state and the Kurihara family had been reached during secret negotiations on Monday.

"I stress again that any of their unilateral acts with the Diaoyu islands are illegal and invalid. China's determination will not change in terms of safeguarding its territory. China is observing the situation and will take necessary measures to defend its sovereignty."

But an alternative plan for the islands, which are surrounded by rich fishing grounds, and are located amid potentially huge gas and oil deposits, could have been far more incendiary.

Japan's interest in state ownership of the Senkakus, a collection of several islands and rocks 1,250 miles from Tokyo, came in response to a purchase bid by the capital's rightwing governor, Shintaro Ishihara, aimed, in his words, at "protecting" them from Chinese interference.

The prospect of three of the group's five islands falling into the hands of a man who has built a reputation for baiting the Chinese was one the Japanese prime minister, Yoshihiko Noda, clearly couldn't countenance.

Within weeks, he announced a rival bid, just as Ishihara and his allies set about raising more than 1.4 billion yen in public donations.

Today, however, it seems that Noda has won the bidding process. Newspapers reported that the parties expect to seal the deal in the next couple of weeks, pending cabinet approval.

"We are negotiating with the owner while we try to grasp where the situation stands between [the central government] and the Tokyo metropolitan government," said Japan's chief government spokesman, Osamu Fujimura. An announcement would be made "when we reach a result after completing the process."

The Senkaku row has been the most volatile in a summer of territorial incidents in East Asia. China has angered its neighbors, including Taiwan and the Philippines, with its aggressive claims to islands in the South China Sea; Japan, meanwhile, has been locked in a separate disagreement with South Korea over a pair of islands in the Japan Sea, known as the East Sea among Koreans.

More from GlobalPost: Islands in dispute. Is K-pop too?

The mood for concessions appears to be prevailing in that dispute, too, after South Korea said a defense drill scheduled for this weekend would no longer include a planned mock invasion of the Dokdo islands, known as Takeshima in Japan.

A spokesman for the president, Lee Myung-bak, denied that the "invasion" had been cancelled to mollify Japan. "Dokdo defense drills are not just simple military exercises," he told reporters. "This is an exercise of a political nature aimed at showing off our political determination not to tolerate any aggression on our sacred territory."

Flare-ups over the Senkakus are particularly problematic for the US. Under the 1960 US-Japan security treaty, Washington is required to come to Japan's aid should any of its territories come under attack. But the US secretary of state, Hillary Clinton, told reporters during an official visit to Beijing today that the US does not favor one claim over the other — days after China made it clear any US interference would be unwelcome.

More from GlobalPost: Hillary Clinton in China amid tensions over South China Sea

The Senkaku dispute last flared up in September 2010, when a Chinese fishing boat collided with two Japanese coast guard vessels near the islands. In an attempt to prevent the row from escalating, Japan detained the captain of the fishing vessel but released him without charge.

His nationalization plan aside, Noda appears determined to ease tensions by agreeing not to build a jetty or other facilities on the islands, a move that China has repeatedly warned would have serious repercussions. Ishihara, by contrast, had hinted he wanted to build a weather observatory and dock, and last week repeated calls for the construction of a typhoon shelter for Japanese fishermen in the area.

Ishihara said the Senkakus' owners had told him the deal had yet to be finalized, while Tokyo officials said their rival offer was still in play.

The most recent tussle ignited nationalist sentiment in both countries. Japan detained a group of Hong Kong-based activists after they landed on one of the islands last month, and there were protests in several Chinese cities after a group of Japanese nationalists did the same days later.

Removing Ishihara from the equation — if media reports prove correct — may have been a sensible move by Noda, but that alone won't be enough to silence the Chinese media's clamor for complete Japanese acquiescence.

"It will be difficult to improve the strained China-Japan relations if the Japanese government continues to adopt the two-faced approach of expressing goodwill on the one hand and allowing rightwing forces to kidnap the government and public opinion on the other," an editorial in the People's Daily said on Wednesday.