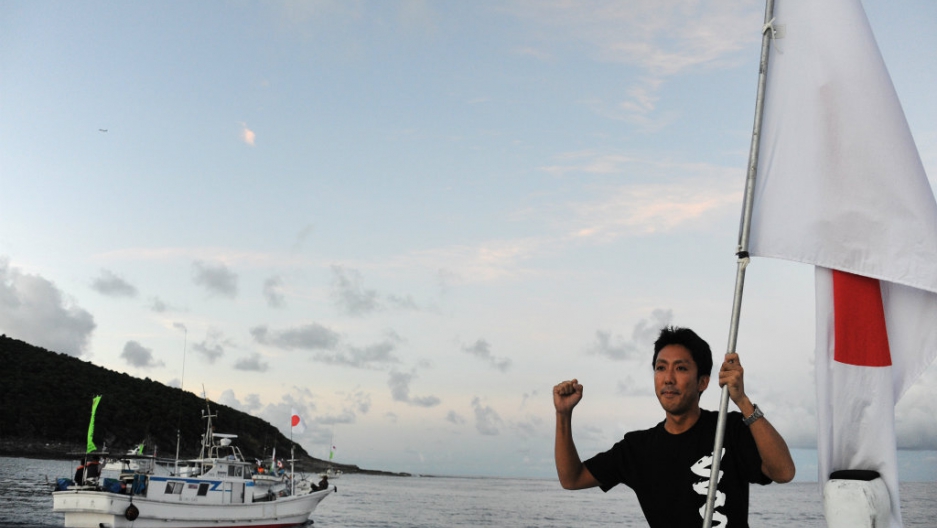 An activist holds the Japanese flag before a group placed the country's flag on a disputed island, part of a group known as Senkaku in Japanese and Diaoyu in Chinese.
Credit: Antoine Bouthier
Share

Japan has reached a deal to buy the disputed Senkaku Islands, in the East China Sea, from their private owner, the Kyodo News agency reported — citing "government sources."

The islands, which are located south of the Okinawa Prefecture and are known as Diaoyu in Chinese, are controlled by Japan, but also claimed by China and Taiwan.

Japanese media reported that Tokyo had agreed to pay the Kurihara family 2.05 billion yen ($26 million) to seal ownership of three of the five main islands.

China condemned the purchase, which has yet to be officially confirmed, as "illegal and invalid," the Associated Press reported.

He added that China was observing the situation and would take “necessary measures” to defend its sovereignty.

More from GlobalPost: What Japan and China stand to gain, and lose, in Senkaku

The purchase of the Senkaku Islands comes after Tokyo's provocative governor, Shintaro Ishihara, first announced plans by the city to make a deal with the owners, the BBC reported, adding the move led to a sharp escalation in tensions between Japan and China.

As reported by GlobalPost last month, large scale anti-Japanese protests hit many Chinese cities, after a group of Japanese activists landed on the islands and raised the Japanese flag.

This came after authorities arrested and deported 14 activists from Hong Kong, who had been protesting either on or near the islands.

According to Kyodo, a formal contract for Japan's central government to buy the islands will be signed by the end of the month.

More from GlobalPost: Why are citizens from Japan and China fighting over East China Sea islands?