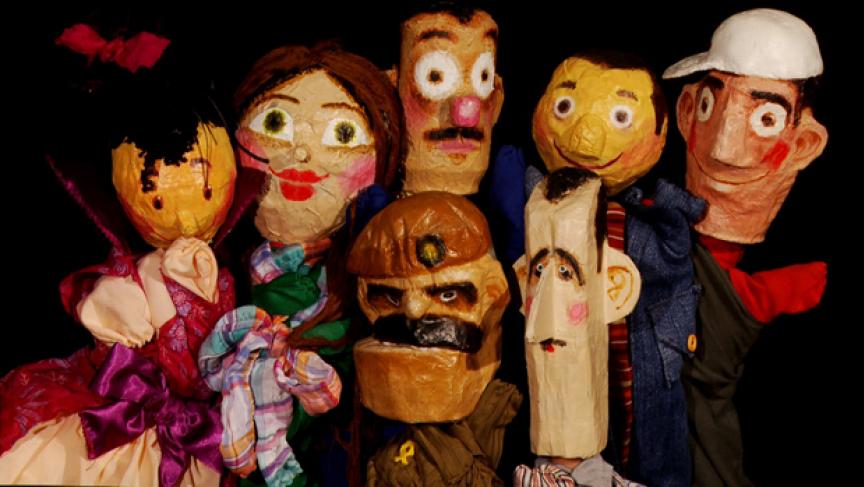 The cast of Top Goon Season Two, a YouTube production that describes the conflict in Syria. (Photo courtesy of Masasit Mati.)

Internet video has been an important part of what the world knows about Syria’s nearly brutal uprising, now approaching its 18th month.

Alongside these raw documentaries, sites like Vimeo and YouTube have also become home to a variety of pieces of video art dealing with the Syrian uprising. One YouTube series, which recently launched a second season, uses puppets to portray and comment on the events in Syria.

The series is called “Top Goon.” Its first episode opens on a lone, snoring finger puppet. It stirs and rises abruptly, escaping a nightmare. The puppet, named Beeshu, is wearing red and white striped pajamas and a matching sleeping cap.

As soon as you see the face it’s clear: this is a caricature of Syrian President Bashar al-Assad.

Soon he’s being soothed by a military aide. The aide assures him that his regime isn’t in danger. Then he sings, cooing Beeshu back to sleep.

“We were very, very nervous,” said Jameel, the director of Top Goon, about uploading this first episode.

But Jameel, which is a pseudonym, as most members of the Masasit Mati group disguise their identities for safety reasons, says the fear was mixed with joy and anticipation.

“It’s the first time in our lives as artists, as young men and women, that we can criticize the regime. We wouldn’t dare to even make a little gesture at them before. Now we’re able to criticize them big time,” he said.

And this is not subtle criticism. Another episode in Top Goon’s first season has Beeshu victorious in a game show called “Who wants to kill a million?”

Others show him dressed as Dracula, sinking his fangs into a protestor’s neck; and consulting with his father’s ghost.

Donatella Della Ratta, a Ph.D. fellow at the University of Copenhagen who studies Syrian popular television, knows the members of Massasit Mati, most of whom are based in Syria. She says that mocking the Assads was unheard of before the Syrian uprising began.

“There might be criticism in Syrian drama, vis-a-vis the government, even high ranks,” she said. “But this criticism will never touch the leader, ever. So yes, I was shocked when I saw that that they were touching Bashar al-Assad himself, and even more surprisingly they were touching Hafez al-Assad, his father, which is a kind of sacred monster in Syria.”

Della Ratta has seen an outpouring of user-generated, creative culture blossom in the Syrian uprising —from video art and theater to music and slogans and re-purposing of regime propaganda.

“So in a way the uprising, plus the use of the Internet, has democratized this way of expressing yourself. It has given a certain amount of power to the citizen to express his view,” Della Ratta said.

She says this sort of creative resistance is still happening, even as things in Syria have grown more deadly in recent months.

The increasingly dire situation in Syria is clearly reflected in Top Goon’s second season, which launched at the end of July. The tone is darker and the violence more prominent.

This is particularly true in an episode from a few weeks ago called “The Monster.” Beeshu tortures a prisoner with whip, a knife, an electric shock, all while taunting the prisoner — telling him that everyone has this kind of brutality in them.

“Let the monster out,” Beeshu says.

These are finger puppets, and still it’s a bit hard to watch. The prisoner snaps and starts to strangle Beeshu. Beeshu is pleased.

Arwa, the group’s writer, who asked that his last name not be used, said this is a real tension among Syrians, and one reflected in Masasit Mati’s work.

“The goal of the group itself is to reflect what people feel. As best we can we try to express the feelings and questions people are living with. And we try to point out the mistakes and present alternatives,” Arwa said.

It’s a tension that Masasit Mati has experienced. Two of the main actors from last season aren’t with the group for this season. They split with the group because they wanted to more actively push for violence against the regime.

There is some optimism in this season of Top Goon. There are new characters meant to show the growing diversity of the resistance, and the creators say several of the forthcoming episodes are set in a post-Assad Syria.

Della Ratta sees hope in the broader creative resistance she still sees going on in Syria.

Jameel hopes the world will hear their voice.

“It is important for them to know that we need them, and we’re disappointed by this shameful silence we’re witnessing lately toward the Syrian people,” he said.

But there are signs some are listening.

A recent comment on Top Goon’s YouTube page reads “We are watching in the U.S. too and praying for all.”