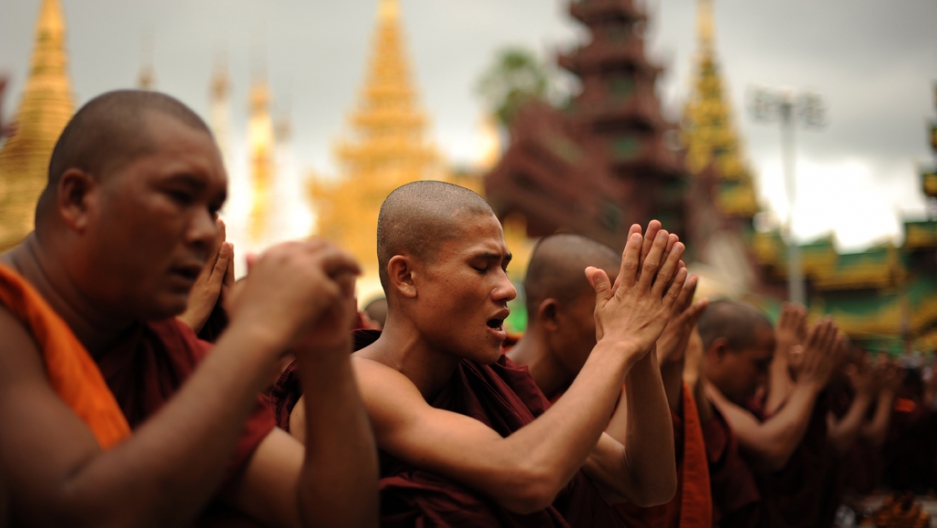 Rakhine Buddhist monks pray as hundreds of demonstrators gather at the Shwedagon pagoda after unrest flared in the western Myanmar state and at least seven people were killed, in Yangon on June 10, 2012. Myanmar on June 10 imposed a curfew in the Rakhine state capital Sittwe, state media reported, amid fears of further unrest following deadly sectarian rioting between Buddhists and Muslims.
Credit: SOE THAN WIN
Share

Buddhist monks in Myanmar have come out in droves to support President Thein Sein's proposal to deport all members of the Muslim Rohingya minority group from the country, in the wake of a summer of sectarian violence that has left 90 dead in Rakhine state.

The Voice of America reported today that large numbers of Mandalay monks attended the third day of the pro-deportation protests, decrying the Rohingya's continuing presence in "their" country.

The Irrawaddy reports the protests had an "unexpectedly large turnout" - a worrisome sign for the Rohingya. Further, police appeared willing to allow the pro-deportation protesters to gather in larger numbers than technically permitted, while enforcing the rules for protesters decrying stricter market rules.

President Thein Sein suggested in July that the Rohingya be booted from Myanmar and placed on the doorstep of any country willing to accept them - a stance the UN refugee agency has loudly decried.

The monks support for this ongoing violence against Muslims is especially ironic, in light of the brutal violence that was used against them by the then much-more-repressive junta in the 2007 protests.

The Associated Press reports that the Rohingya are essentially caught between two nations: they are considered low-status recent immigrants in Myanmar, but Bangladesh has no interest in taking them in.

The UN estimates there are around 800,000 Rohingya in Myanmar.

The Wall Street Journal states around 90,000 Rohingya have escaped to refugee camps in Bangladesh in recent months, where they languish with upwards of 300,000 of their fellows in camps left over from the last outburst of anti-Muslim violence, 20 years ago.

The UN called the Rohingya "virtually friendless amongst Myanmar's other ethnic, linguistic, and religious communities" in a December report entitled "State of Denial."

Last week, 3 aid workers - two of whom were UN employees - were arrested in Myanmar and sentenced to jail time for their role in the sectarian violence.

Myanmar President Thein Sein personally pardoned them, although details have yet to emerge as to what exactly the charges were, and the prison sentences original length, says CNN.