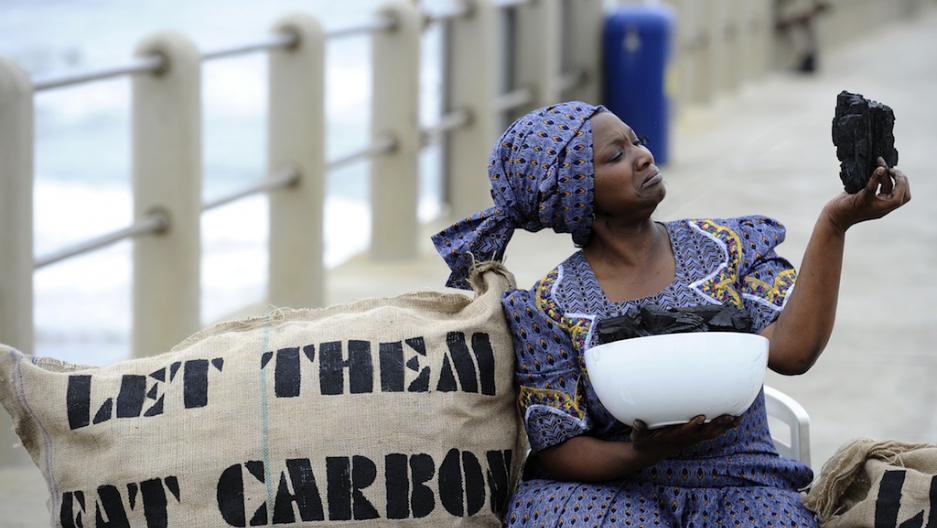 An Oxfam activist pretends to eat a piece of coal at a protest at the 17th Conference of the Parties in Durban last year. Talks in Bangkok meant to lead into the 18th Conference of the Parties, which will happen in Doha, have fallen apart and an agreement seems unlikely at this time, as developed and less-developed countries fight out financial questions.
Credit: STEPHANE DE SAKUTIN
Share

In Bangkok last week, representatives of the Obama administration brought a heap of apparent apathy to the negotiating table, refusing to discuss an international treaty to curb global emissions, reported News Day New Zealand, which called the US representatives to informal, UN-hosted climate talks the "elephant in the room."

But the US isn't alone in its reticent stance on climate negotiations. Rich countries (like the US, Japan and Canada) continue to face off against poor countries this week as climate change discussions resume on either finalizing an extension of the Kyoto Protocol, which will expire at the end of this year, or getting started on a new, binding agreement that can be finalized at the massive Doha summit in November.

Pessimism is palpable, however, as many watchers can sense an impending repeat of May's Bonn conference, where absolutely nothing was accomplished and all parties walked away frustrated.

More from GlobalPost: Climate talks in Bonn end in disappointment

The Bangkok meetings, like those in Bonn, are focused on designing a extension package to the 1997 Kyoto Protocol so that it can be maintained until 2020. However, while the EU has agreed somewhat to this idea, the US (which never ratified Kyoto to begin with) has made it clear they will not negotiate to curb emissions more than they've already agreed to – 20 percent by 2020, at 1990 levels. China and India have echoed this stance, and most developed countries are pushing for a new treaty entirely.

However, the deepest concern in Bangkok isn't the emissions negotiations, or the temperament of the US delegates; it's financial. While the US and others want to end discussions of Kyoto, less-developed countries feel they're absorbing a larger burden than their over-developed, more financially stable counterparts, because they're more at risk for the adverse effects of climate change, and seem to be worst hit by them, such as tsunamis and other forms of weather and natural disasters.

While the developed countries face uncertain stock markets, massive debt, and austerity packages (in the case of some EU countries), funding for poorer countries' climate change financial aid packages has been pushed to the back burner across the board, causing a panic in the lower-income countries.

"Almost 50 of the world's poorest nations said pledges made by rich countries to provide funds to help them adapt to a warmer planet risk being overlooked," reported Reuters' AlertNet. "The group of mostly African nations said that ill-fated talks launched in 2007 to find a successor to the Kyoto Protocol must not end without richer nations pledging financial aid to help them cope with more extreme weather and rising sea levels caused by climate change."

Funding to poor countries has been pledged at $10 billion a year, but that figure is set to expire in December, along with the provisions of the Kyoto Protocol. While the wealthier nations have pledged to find $100 billion per year beginning in 2020, the gap between then and now is large and empty, and an agreement doesn't seem close at hand.

"We cannot live with these issues being deferred until a new agreement is negotiated in 2015 and that would not even come into effect in 2020," said Pa Ousman Jarju, the Gambian chair of the Least Developed Countries (LDC) working group, to AlertNet.

If negotiations don't pan out by the time talks end this week, sore delegates will take their disagreements to Qatar for the official 18th annual Conference of the Parties of the Kyoto Protocol, where a decision will need to be made and the LDC working group will be forced to take what's offered for the interim years until 2020.

"What we need are old fashioned negotiations, an understanding of the term ‘compromise’ and a smidgen of realism," wrote Ed King, editor of the Responding to Climate Change blog, in a post last week about how countries could find common ground and reach an agreement.