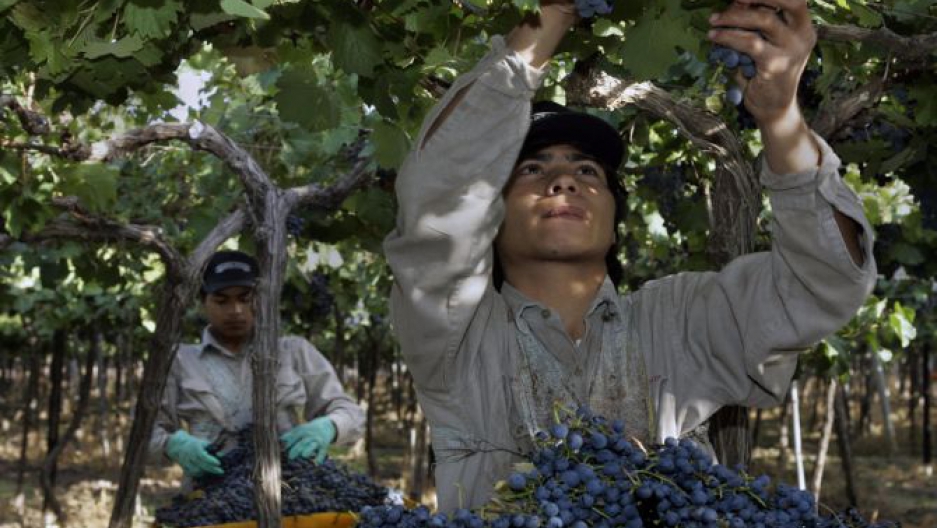 MEDRANO, Argentina — Rosa Ponce, a tall woman in a button-down jean shirt and long pants, her blonde hair piled under a bandana, squints into the sun as she examines a grape vine.

Under a blue sky with the snow-covered Andes in the distance, she deftly prunes dry shoots and unwanted buds off the vines to make room for new clusters of the inky-red grapes that have become synonymous with this part of the world, the French-imported Malbec.

Pruning the plants, this crucial first step, will determine the success of the harvest eight months later, as well as Ponce’s own fortunes here in the picture-perfect landscape of Argentina’s wine country. As a contratista (contract worker) for Viñasol, a non-profit association of small wine companies here in the province of Mendoza, the 36-year-old stands to reap a portion of next year’s earnings.

“With the contratista system, she is the owner of production,” says Eduardo Bertona, Bodega Furlotti president, during a stroll through the vineyard, one of thousands across 4,800 miles of irrigated desert running from Argentina’s northern coast to the southern region of Patagonia that are preparing for the start of a new growing season.

In an age of corporate-scale agriculture, Viñasol is rewarded for its egalitarian labor system with a fair trade logo that allows it to charge a premium for its wine and grapes, sold with fair trade labels at Sam’s Club and Prestige supermarkets in the US, Canada, the Netherlands and the UK.

But Furlotti managers say the system that presents some opportunity for upward mobility is at risk, with the numbers of contratistas dwindling from 12,000 to 4,000 over the last decade.

Meanwhile the country’s wine industry, which took advantage of a highly depreciated Argentine peso after Argentina’s 2002 economic collapse to grow Malbec grapes lucratively — attracting foreign investment and massive vineyards — has taken a slide since President Cristina Fernández de Kirchner instituted new policies to restrict trade after her re-election last October, according to a recent report by the USDA.

Now the buffer created to protect Argentina’s economy from the financial woes of the some of the world’s richest countries is hindering an industry whose lifeblood is foreign consumers.

The sudden retraction is a shock to the system in Mendoza, which in the past 10 years built a grow-for-export industry that by 2011 was supplying 45 percent of the world’s Malbec wine and had become the world’s fifth-largest wine region.

“Forming the association was a way to defend the small producers from the incursion of huge growers and the homebuilding industry,” Burdotti says during a tour of Furlotti’s modern winery in Lujan de Cujo, a rural suburb of the provincial capital.

Never mind that the system was devised by immigrants from Tuscany and Spain in the 19th century when labor laws did not exist as a way to gain a foothold in a new country.

“The prospect was better for fair trade wines,” the winery president Bertona shrugs.

For nine months in the vineyards, Ponce is entitled to 17 percent of the total grape sales at harvest. She also holds a seat on Viñasol’s 25-member assembly of vineyard owners and contratistas, who meet twice a year to discuss how to carve up la prima, 80 percent of the profit off the fixed rate for fair trade — 0.05 euros above the standard 0.25 euros per kilo of grapes.

In recent years, the assembly has used the money to pay for computer education for the children of contratistas. The assembly also granted some money for Oscar Rojas, a Bolivian contract farmer who is building a house for wife and five small children brick by brick in a tract of brownfield across from the vineyard.

“The life is rather similar,” reflects Rojas, who has worked at both large-scale commercial farms and as a contratista since immigrating to Argentina from Bolivia as a child. “Pay might be better here,” Rojas says with a grin, “but there is also more risk.”

According to fair trade advocates, the rates guaranteed for fair trade wine and grapes have helped shield smallholders like Furlotti — and the contratistas — from the whims of markets and of governments.

Ponce had a way to feed herself and three children after her husband, Antonio, died from undiagnosed heart disease at 53.

“The work helps me,” Ponce says, using a forearm to wipe bits of the sandy soil from her eyes. “There was nothing left for me but to continue working,” she says, wrenching away shriveled shoots as she talks about her late husband, a contratista who had worked the same vineyards for 30 years, a job he assumed after his father retired.

“This is all I know,” Ponce, nicknamed la gringa (the white lady) for her light complexion, blonde hair and blue eyes, says with a laugh.

She and her children Carlito, 13, Diana, 15, and Santiago, 17, live in a brick and tin house with an outdoor stove on company-owned property adjacent to the vineyard. Three rooms are sparsely decorated with photos in gold frames, pleather furniture and the odd home appliance, purchased with the proceeds from a better-than-average harvest.

The daughter of a contratista, Ponce was one of eight children, and left school at age 11 to work in the vineyards with her parents. Ponce’s children are permitted by the arbiters of fair trade to pitch in during the harvest and after school or on weekends, but Ponce wants that tradition to end with her.

“My hope for my children is that they finish school,” she says later in the sparsely furnished living room of the modest structure where her late husband grew up.

Across Mendoza, wineries are named for people like Ponce, in homage to a labor system that gave immigrants an opportunity to advance from poor farmworkers to wealthy landowners. Indeed, Bodega Furlotti founder Angel Furlotti worked as a contratista for decades after immigrating from Parma, Italy in 1899 before saving enough to go into business for himself.

Ponce will hope that her fortunes, like generations of Argentine contratistas before her, will slowly build along with the popularity of the fair trade logo.