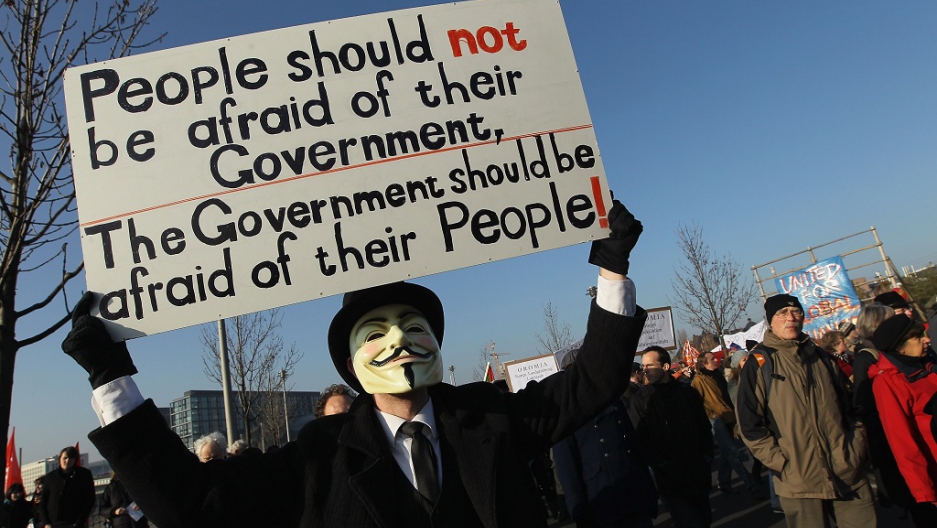 A man wearing an Anonymous mask joins demonstors protesting against the world financial system during a march on November 12, 2011 in Berlin, Germany. Inspired by the 'Occupy Wall Street' protests in the USA, similar protests have been taking place across Germany, especially in Berlin and Frankfurt, for weeks.
Credit: Sean Gallup
Share

Anonymous is targeting the New York Times for the “failure of the press” to give adequate coverage to Trapwire, what some say is a global system of surveillance run by the US government.

In Operation NYT (#OpNYT), personal correspondence between New York Times staff and Barrett Brown was released to the public. Brown is the founder of Project PM and an individual that has worked alongside Anonymous on several operations,.

“Incidentally, the NYT was offered the first look at the e-mails which produced that and other scandals, but declined, and the e-mail evidence of this and other incompetence will be provided to all through other press channels within the next 48 hours, or else via the usual Anonymous venues,” wrote Brown in a press release on Pastebin.

More from GlobalPost: LulzSec hacker arrested in US

In the Global Intelligence Files, Wikileaks published documents from intelligence firm Stratfor detailing a global spying program run by the US government known as TrapWire.

“Some of the hits and misses I’ve seen, it’s terrible. It’s the complete failure of the press,” Brown told GlobalPost.

The emails, released by Brown, contain his personal correspondence with New York Times' staff. The release of the emails are meant to expose the New York Times for willingly discounting evidence and giving deference to the Department of Homeland Security, stating that the fears over TrapWire are exaggerated.

Brown and other Anons are also alleging that the Cubic Corporation, a government contractor, is in control of TrapWire. The New York Times made no such allegations despite having access to evidence, Brown said.

“It’s not just TrapWire, they haven’t read even the basic facts. Cubic is not mentioned in the New York Times articles. We have documents saying cubic secretly owns parts. The next two weeks, reporters came to us and reported the real stories,” Brown said.

Brown wrote that several other news outlets, including NBC, got it right where the New York Times got it wrong.

More from GlobalPost: Gaming and geopolitics collide in Iran

Anonymous operates with a promise of never attacking the press and Brown insisted that the release of the emails was not an attack on the New York Times, noting that the emails were all his personal correspondence.

“This wasn’t an attack on the press. I was given the admin password for the NYT in chat but that’s a line I don’t want to cross right now,” said Brown, stating that even though he had the ability to access the Times’ servers, he chose not to.

Brown has also stated his intention to release correspondence from other news organizations in an effort to expose the press’ failure to report accurately on TrapWire. He will release the third and final collection of emails from the New York Times late Tuesday, according to his Twitter feed.

“I’ve got tons (of emails) from every publication in the world,” Brown said.

More from GlobalPost: US lags behind in broadband access