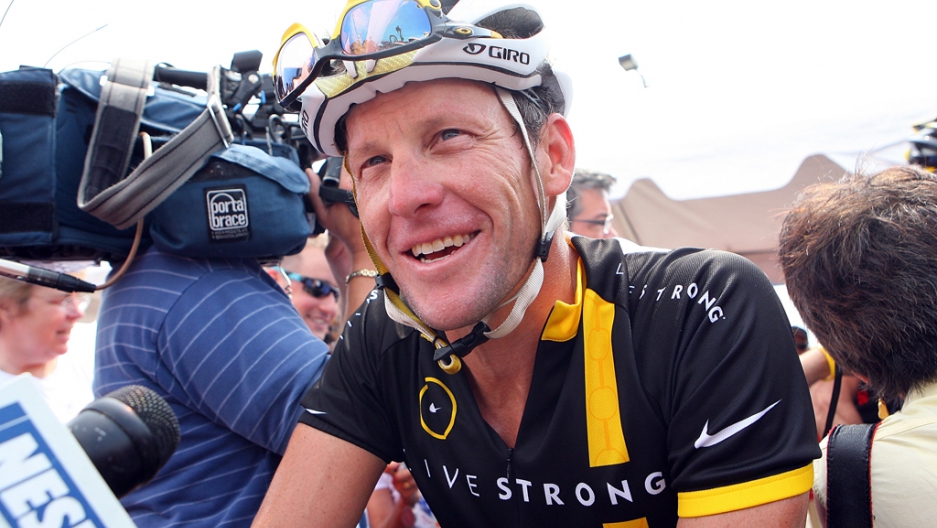 An almost two-year long doping inquiry against cycling champion Lance Armstrong and his teammates closed Friday. Armstrong has not had any charges brought against him.
Credit: Gail Oskin
Share

NEW YORK — Lance Armstrong’s decision to not contest the allegations against him brought by the United States Anti-Doping Agency (USADA) has left him banned from the sport for life and stripped of his seven Tour de France titles.

With several former teammates having already been forced to tell the truth under penalty of perjury to a federal grand jury, including some who had never tested positive and had no axe to grind, it seems likely that Armstrong simply knew he couldn’t win, and decided it was not worth it to expose himself to the daily drama of witnesses telling the same story: that after being diagnosed with cancer in 1996, going through chemotherapy and recovering, Armstrong used illegal blood transfusions (“blood doping”) and banned performance-enhancing drugs to stage his comeback and win the Tour in 1999 and the six years to follow.

The American public has been slowly getting their heads around the idea that a person they regarded as an heroic figure had broken the rules. Judging from the news coverage, I think at the end of the day that most Americans will accept that Armstrong doped to stage his comeback — after his cancer — if they believed that by doping he was only leveling the playing field with all the other top cyclists at the time, almost all of whom also seem to have been doping.

But I would argue there is a bigger set of questions to be asked about Armstrong than just whether drugs facilitated his comeback after cancer. We also need to ask — now that he has been banned for doping — whether drugs might have played a role in his cancer. In trying to answer this question, it’s helpful to understand a bit of technical detail about how doping practices in cycling have changed over the years.

The main doping practices of the last 15 years in cycling have involved artificially raising the level of red blood cells in the body. There are two ways of doing that. One involves removing a significant amount of the athlete’s blood a few months before a big race, storing it in a refrigerator, and, after the body has replaced the missing blood, re-injecting it. Many of Armstrong’s teammates have admitted to “blood doping” in this fashion. Receiving transfusions of your own blood is nearly undetectable and has almost no significant adverse effects on the athlete’s health. The second way involves the use of a relatively safe drug, Amgen’s erythropoietin (EPO), a recombinant drug that provokes the body to make more red blood cells. Either method can induce superhuman oxygen-carrying capacity.

EPO first gained FDA approval and hit the global market in the early 1990s; by the mid-'90s observers started to notice much higher average speeds in the Tour. Thanks to a number of scandals and criminal convictions (which I described in a blog posting here), we now know doping with EPO in pro cycling was rampant by the late 1990s. It was the drug of choice when Armstrong’s comeback began in 1998, along with blood doping.

Now, blood doping and EPO are not only very hard to detect, they also have relatively insignificant side effects on one’s health. But during the first years of Armstrong’s pro career, which began in the 1993 season, EPO was almost brand new. Cyclists were still largely using a prior generation of drugs — steroids, much like those used by weightlifters and bodybuilders. Such drugs mildly raise the number of red blood cells, but their main benefit is that they allow the body to withstand the battering of the thousands of miles of training the average pro puts in every year. Riders are still using steroids. But they likely abused them to a much greater extent in the 1980s and the first years of the 1990s, when Armstrong’s career began (and before EPO was widely available).

Now, unlike blood doping and EPO use, steroid use is dangerous. In July 2004, Jason Giambi, the Yankees’ hulking first baseman, was diagnosed with an obscure form of pituitary cancer typically only seen in weightlifters abusing steroids. He survived, and years later he finally owned up to having abused several different steroids in the years just before his cancer, and just prior to his signing a $120 million dollar guaranteed contract. The history of bodybuilding is similarly rife with examples of people who developed liver and other cancers as a result of steroid use.

Armstrong had testicular cancer, not as rare as Giambi’s pituitary tumor, and there is no vast scientific literature examining links between testicular cancer and steroid abuse (though a witness to an early hospital-bed conversation between Armstrong and his cancer doctors testified that he admitted using human growth hormone prior to his illness, which is well-linked to a great variety of cancers). But it raises what I think is really the most important question in Armstrong’s case: did abuse of the steroid drugs whose use was rampant in cycling in the 1980s and early 1990s cause the cancer that ultimately made Armstrong into a global celebrity, and into an heroic figure in the eyes of the global cancer community?

While the public might accept the idea that a cancer victim would use relatively safe doping techniques to come back to compete in a sport already infested with doping (and, through the beautiful illusion, inspire millions of cancer victims in their own private battles against the disease), I don’t think any part of his public reputation would survive if it turns out that his disease itself was a product of pre-comeback doping.

Several years ago, Greg LeMond, the only previous American winner of the Tour de France, and like Armstrong someone who had overcome a near-death experience to come back and win the world’s hardest sporting event, was asked about the doping allegations against Armstrong. His comment at the time was “If Lance is clean, it is the greatest comeback in the history of sports. If he isn't, it would be the greatest fraud.” Because of the passage of time, and the limited state of scientific research on steroid abuse and testicular cancer in particular, whether doping contributed to his disease is a question that will likely never be answered. But will Armstrong’s career as a cancer ambassador survive the doubt?

Shayana Kadidal is a constitutional lawyer in New York City and an avid cyclist.