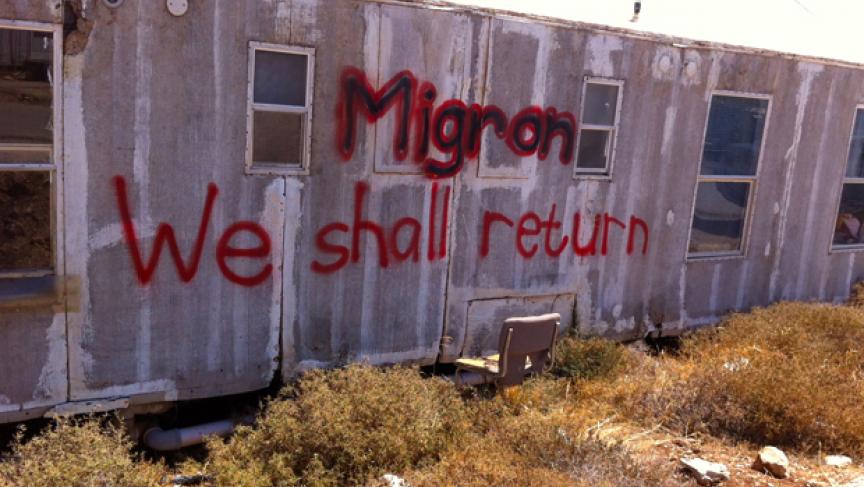 Advocates for Israeli settlements in the West Bank are denouncing the eviction of about 50 Jewish families from their homes over the weekend. They were living in a wildcat Jewish settlement outpost near the Palestinian city of Ramallah, called Migron. Their eviction follows a six year legal battle.

Migron is a 20 minute drive from Jerusalem. The community was established about 10 years ago and it grew to become the largest of the 100 or so settlement outposts scattered across the West Bank. The legal fight over Migron took on symbolic meaning for both sides in the political fight over the settlements. The eviction is not a clear-cut victory, or defeat, for either one.

Israel's Supreme Court ruled that the settlement outpost was built illegally on private Palestinian land and it would have to be evacuated. Since 2006, Israel's government promised to evict Migron's residents. Deadlines came and went. But things finally came to a head this weekend.

On Sunday morning, dozens of Israeli police arrived in Migron and went door to door, handing out eviction notices. Dozens of Jewish teenagers also showed up. The young right-wing activists came to protest the eviction of Jews from land they consider to be their God-given right.

A 17 year-old named Meir said the people of Migron need to resist. “They should not use violence,” he said, “but they shouldn't go willingly either.”

By mid-day, most families had left. Though a few stayed to passively resist their eviction.

Aviella Dietch, her husband and their three children were among the last to leave. They walked out of their home in single file, past a gaggle of news crews, and they remained almost completely silent. Aviella held a piece of printer paper with a few lines of Hebrew in blue. It said, “The eternal people do not fear the long journey.”

By day's end, police had scuffled with a few teenagers and made eight arrests. But as the Israeli government had hoped, there were no scenes of violent clashes between police and settlers.

Danny Dayan was on hand to observe. He is the chairman of the Yesha Council, which represents Israeli settlements in the West Bank. Dayan said no one wanted to see violence.

“But have no doubt about it,” he said. “We will return here.”

“From the original Migron, we will have two or even three communities that will be established based on Migron. So, maybe it's a step backward, but on the long run we will prevail in this endeavor.”

As the last few residents of Migron left, moving trucks arrived. It was part of a deal with the Israeli government. If the settlers of Migron agreed to leave voluntarily, they could move into a soon-to-be-completed new settlement, just a mile down the road, built at the government's expense.

At that site, called Givat Hayekev, construction workers put the final touches on rows of newly built, red-roofed houses. One of the laborers made a comment about how quickly the homes went up – in about five months. And how, he thought at least, they were much nicer than the mobile homes settlers had been living in back at Migron.

Prime minister Benjamin Netanyahu welcomed the peaceful eviction of Migron on Sunday as sign of his government's commitment to the rule of law and to expanding settlements. He said there is no contradiction to the two.

Critics of the deal, however, say it sends the wrong message.

Hagit Ofran of Peace Now, the Israeli group that opposes the settlements and brought the lawsuit against Migron said, “Unfortunately, the message of this government is that crime does pay.”

“If you build illegally on other people's land, you might get a house for free from the government,” Ofran said.

Ofran added that she respected the setters of Migron for not resorting to violence and leaving their homes in dignity. But she sees this development as an important victory.

“We managed to force the most right-wing government to remove a settlement.”

“The settlers never dreamed that Migron [would] be evicted,” she said. “They were planning to have it like a normal settlement with permanent homes, with hundreds of families, and they failed.”

Other settlement outposts are now facing legal action and possible eviction. But residents of Migron say their fight is not over. Some of the families filed a last-minute court petition claiming that they legally purchased land where their homes were built.