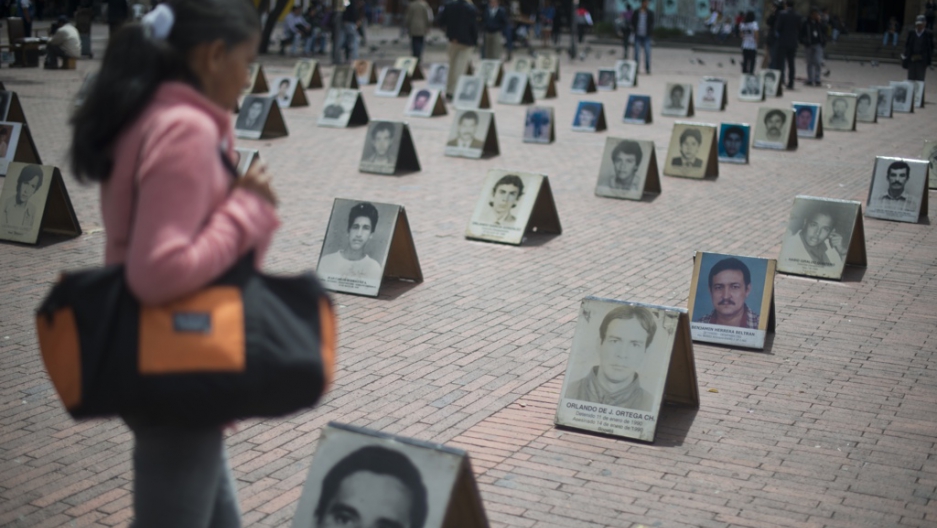 An outdoor exhibit marks International Day of the Disappeared in Bogota, on Aug. 30. According to the United Nations there are more than 57,200 missing people in Colombia in the last 30 years, more than 15,000 are considered victims of enforced disappearance.
Credit: Eitan Abramovich
Share

SAN DIEGO, Calif. — The politics of peace in Colombia: Has the United States missed an opportunity?

Monday’s announcement of Colombian peace talks brokered by Cuba, Norway and Venezuela caught more than a few by surprise. After years of Colombian President Juan Manuel Santos halting all discussions of peace, colorfully claiming to be keeping the keys to peace in his pocket, it was hard to surmise why they were pulled out just now?

Perhaps President Santos had to respond to former President Alvaro Uribe’s continued public criticisms, including allegations last week alleging that the Colombian government was meeting FARC insurgents secretly (which proved to be true). Or maybe Santos realized that the inversion of his political calculus might be more beneficial: Instead of seeking re-election and then committing to a peace process, a commitment to peace might ensure his re-election.

Still unclear is what kind of peace talks are being planned. Is the president proposing a limited, elite activity to end the fighting and yield him a Nobel Peace Prize and a second term — or something more? Importantly, what will "peace" look like for the uniformed men who have to agree to it? Though not all dishonorable, many of them have inflicted savagery on the Colombian countryside, including killing their fellow citizens, often non-combatants, and regularly committing human rights and international humanitarian law violations, trafficking drugs, and enriching themselves in the process. Many of them are already demanding guarantees of immunity and not being extradited to the United States.

Ending the fighting would be welcome relief for Afro-Colombians, displaced persons, indigenous peoples, rural peasants, trade unionists and women victims of sexual violence caught in the crossfire. But that alone may not be sufficient if it leaves a legacy of injustice that could inspire the next generation of revolutionaries and drug traffickers, both of which having been endemic in recent Colombian history. What’s at stake is whether the root causes of the conflict, meaning the challenges of Colombia’s history of political, social and economic exclusion, will be addressed or passed over in this process?

Despite assurances by the Colombian government that President Barack Obama knew about the talks, the reaction by the US government has been neither convincing nor visionary. State Department spokeswoman Victoria Nuland reiterated “unwavering” US support for the Colombian government in Tuesday’s daily press briefing. A weak “we hope that its citizens will find peace and security” and “we defer to the Colombian government on how it wants to proceed” followed. This seemed even the more notably feeble given vigorous US support for Plan Colombia, $8 billion of anti-insurgency and anti-narcotics US assistance over the last decade. Despite Ms. Nuland’s affirmation that in Colombia “we’ve been partners in trying to bring peace for a long, long time,” the United States has not articulated a clear vision to support peaceful resolution of the Colombian conflict since negotiations failed in 2001.

Perhaps Obama, and his political opponent Mitt Romney, are too engaged in the heat of campaigns and conventions. But one would hope the United States is capable of seizing the moment when our closest ally in the region announces a process to resolve the hemisphere’s only remaining civil war.

So what role can the United States play in more vigorously supporting peace in Colombia? The prospects for direct US involvement seem to have passed. Worse even, two of the US’ most vocal critics in the region, Cuba and Venezuela, have literally taken the moral high ground as host nations for a peace process. But building the capacity for Colombians to transform their national reality and achieve reconciliation is also a clear opportunity to demonstrate US leadership and commitment to pluralist, inclusive democracy in Colombia.

The United States could add value to this process by dedicating resources, political and economic, to ensuring a far-reaching discussion that asks what “peace” looks like to the Colombians most affected by the conflict, the millions of Afro-Colombians, displaced persons, indigenous peoples, rural peasants, trade unionists and women mentioned earlier. That would certainly make sense in terms of our historic, democratic values. It would require the kind of participatory consultations that reflect the best of American ideals. And it could be built around the significant experience of US government agencies, like the US Agency for International Development, that have assisted displaced persons and the vulnerable in the conflict zones thanks largely to lobbying by human rights advocacy organizations and budgetary allocations by Sen. Patrick Leahy and the Congressional Black Caucus.

For more than a decade the United States has clung to a vision, articulated most forcefully by Uribe, the former president, that a military solution is the only way forward in Colombia. That vision has resulted in the world’s largest population of internally displaced and systematic violations of human rights by the Colombian Armed Forces (as well as violations of international humanitarian law by the insurgents). This has allowed detractors of the United States, many from countries that border Colombia, the opportunity to continue to rally around anti-militaristic imperialism discourse into the 21st century.

The US may have squandered the opportunity to lead for peace, preferring instead to make free trade its banner issue even though this also lends itself to criticism for favoring elite economic interests in both countries. Perhaps it is time to re-evaluate the impact of Plan Colombia and consider making conflict resolution a priority in our policy towards Colombia? Putting together a strategy to support peace in Colombia should prove more rewarding for both our foreign policy and our legacy in the region over the long run.

This week there is finally anticipation that a half-century of civil war may be brought to an end as negotiations begin. But talks are just the beginning of bringing peace to Colombia, and the United States should define more visible ways to support this historic opportunity for transformation that reflect our own democratic values.

Milburn Line is executive director of the Joan B. Kroc Institute for Peace & Justice at the University of San Diego. From 2007 to 2009, he managed a project in Colombia that worked with civil society and State institutions working to protect human rights.