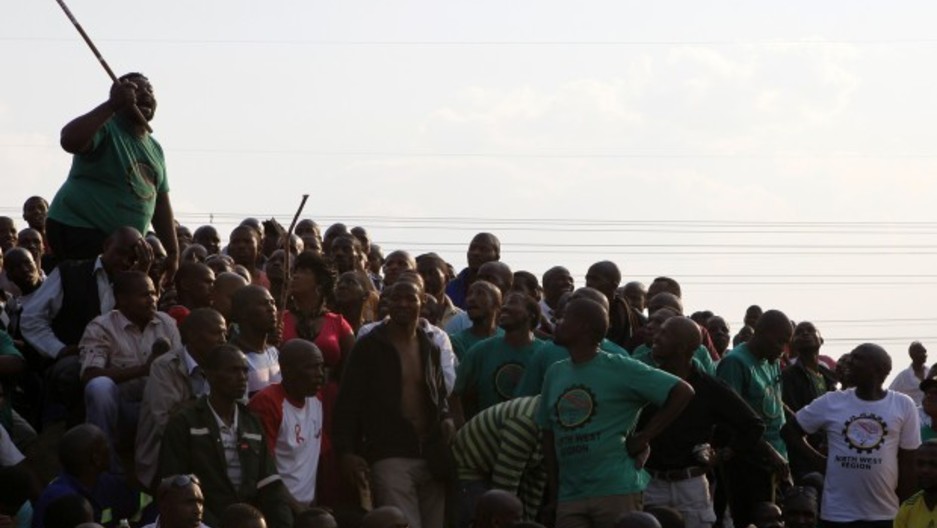 Members of the Association of Mineworkers and Construction Union (AMCU) gather at a hill dubbed the "Hill of Horror" during a memorial service for miners killed during clashes at Lonmin's Marikana platinum mine in Rustenburg, 100 km (62 miles) northwest of Johannesburg, August 23, 2012. South Africans held a memorial service on Thursday at a platinum mine where police shot dead 34 strikers, bloodshed that revived memories of apartheid-era violence and laid bare workers' anger over enduring inequalities since the end of white rule. Some 500 people crammed into a marquee pitched at the platinum mine, near what has been dubbed the "Hill of Horror" where police shot dead 34 striking miners in the deadliest security incident since apartheid ended in 1994. REUTERS/Siphiwe Sibeko (SOUTH AFRICA - Tags: CIVIL UNREST BUSINESS EMPLOYMENT ENERGY POLITICS)

Share
Last week a memorial service was held for 34 people killed during a strike at a South Africa platinum mine. Now, 270 of the miners involved in that unrest, have been told they will face murder charges. A law dating back to the apartheid era is being used to prosecute them. Host Marco Werman talks with reporter Anders Kelto in Cape Town.