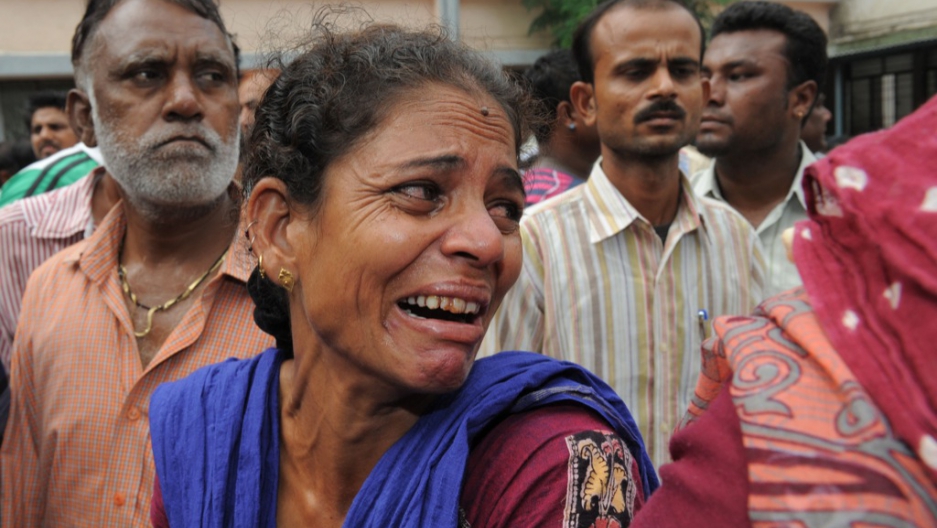 Family members of a convicted man react in the special court compound in Ahmedabad on August 31, 2012. Maya Kodnani and Bajrang Dal leader, Babu Bajrangi are among the 32 people convicted by a special court in the Naroda Patiya riots case and the pronouncement of the quantum of punishment is likely later in the day. Some 97 Muslims were burnt alive in Naroda Patiya area of Ahmedabad in 2002 after the Godhra Train carnage.
Credit: SAM PANTHAKY
Share

A leader from Narendra Modi's Hindu nationalist Bharatiya Janata Party (BJP) and the far-right Bajrang Dal were among 32 convicts awarded stiff sentences by a Gujarat court Friday for their role in the Naroda Patiya massacre -- which took place during the Gujarat riots of 2002.

Maya Kodnani, a BJP member of the state legislative assembly, was sentenced to 18 years in prison, while Babu Bajrangi of the Bajrang Dal was awarded a life sentence, the Indian Express reports.

The case has garnered additional media attention because Kodnani was formerly a minister in the state government of Modi, who is now the frontrunner to become the BJP's candidate for prime minister, but is still blamed by many for allegedly allowing the 2002 riots to rage on instead of taking swift action to end them.

Official estimates and human rights workers' tallies vary. But it is widely accepted that more than a thousand people were killed during the violence, most of them Muslims.

Not long after India's ill-fated efforts to censor social media sites, the reactions on Twitter ranged from the euphoric to the cynical. Various users cheered the conviction and sentencing as proof that India is finally moving toward prosecuting malefactors, rather than protecting them and exploiting their violence for political gain (certainly a better solution than censorship). But commentators from the right were quick to point out that powerful members of the Congress Party, such as Jagdish Tytler, have still not been held to account for their alleged role in the anti-Sikh riots of 1984.

Perhaps it's not the right time for such observations -- as the timing suggests a sort of justification for the murder of 97 people, rather than a genuine call for additional prosecutions. But the Congress Party should take heed nonetheless. Riots won't end because the thugs of one party or ideology are put behind bars. They will end when that punishment is applied universally.