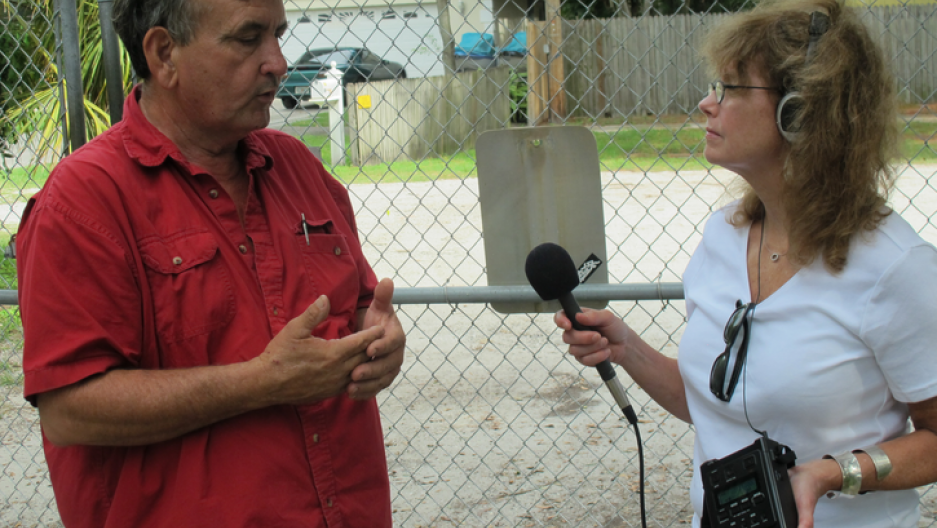 Vernon Yates has been chasing a monkey across Tampa for some three years now. (Photo by Kevin Sullivan.)

Vernon Yates, a wildlife expert who cares for animals while cases against their owners are adjudicated, is the go-to guy when wild or exotic animals are on the loose in Tampa, Fla.

At his home, he has animals ranging from panthers to cougars and deer.

But the animal that really has his attention is a macaques that’s not in one of his cages. It’s been loose in Tampa for three years and has become a symbol of freedom to animal lovers and libertarians.

But it’s also a source of frustration to Yates and the state officials tracking him.

“I feel really sorry for the primate. For his own well-being, he doesn’t need to be out there, so-called free,” Yates said.

The monkey in question is believed to be a run-away from a troop of wild monkeys that have made their home along the Silver River, 100 miles away from Tampa. From time-to-time, male monkeys are forced out of the group if they try to challenge the alpha male's dominance.

Yates compares the monkey to a homeless person, who would prefer a home to living out in the open.

And that view makes him controversial among animal rights activists, a label Yates does not use for himself.

Here’s where Yates parts ways with animal rights activists: He wants species to thrive, but he thinks the best way to do that is to let responsible owners care for them, instead of letting them run free, because they’re increasingly being killed in their natural environments.

These views have not made him popular.

“I’m hated by both sides. The animal rights people hate me because I will fight until my last breath for your right to have (the animal),” he said. “But at the same time, those who have animals scream and holler at me all the time that I wouldn’t help law enforcement take animals if they didn’t have a place to put them.”

The troop of macaques was first introduced to Florida back in the 1930s by a New Yorker named Colonel Tooey, reports The New York Times. Tooey ran tour boats up and down the Silver River, and thought wild monkeys would make his boats more popular.

So he put a half-dozen silver macaques on an island. Legend has it within minutes they were off the island. The troop grew to some 80 monkeys and before long there were reports of monkeys wandering away. That's what's believed to have happened with the monkey Yates is after.

Yates doesn’t see his house as the ideal place for the animals he chases down. He doesn’t even want to care for these animals, but he knows many would be killed if he didn’t.

“I’m old, I don’t want any animals to take care of — I can barely take care of myself,” he said. “We’re not a sanctuary, we’re a shelter. A shelter means emergency help in finding a home.”

For some animals, Yates does have a soft spot. He has three large tigers that he keeps as pets: Teddy, Nina and Emily

“They’ve all been out on a boat multiple times. I take my tigers out, it’s not a big deal. They ride in the front side of the car with me, they come into my house, they do all kinds of stuff,” he said.