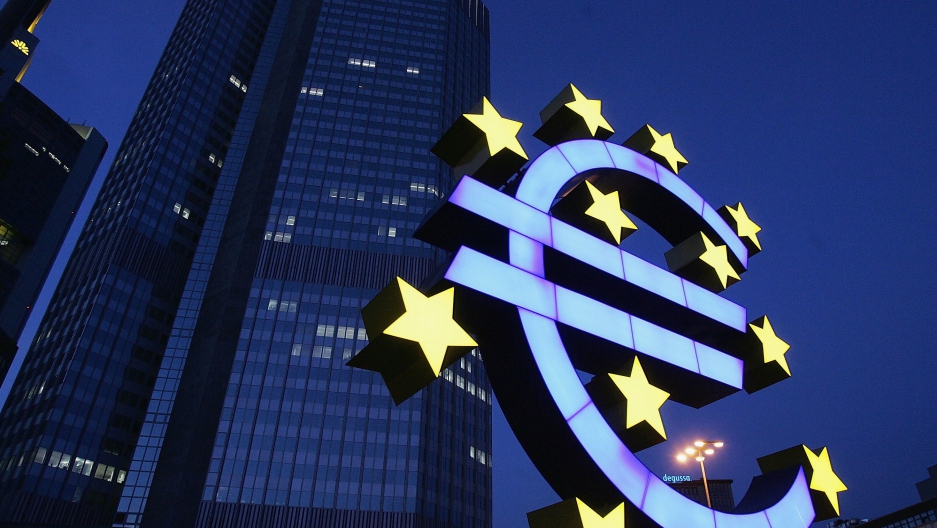 The headquarters of the European Central Bank in Frankfurt. Germans may be responsible for the euro's fate, but most don't like it. Young people especially.
Credit: Ralph Orlowski
Share

BERLIN, Germany — Patrick Radmacher sips tea in the leafy courtyard of central Berlin’s Humboldt University. The crisis gripping much of euro zone seems far away from this quiet corner of the German capital where the 24-year-old history student is taking a break from his work in the library.

Young Germans aren’t facing the kind of bleak future and unemployment confronting their counterparts in Greece and Spain. Nevertheless, he says the crisis worries him and his friends deeply. “It’s the largest issue facing this generation.”

That’s because prosperous Germany must shoulder the lion's share of the burden if the euro is to be saved.

Bailouts for Greece and other stricken economies are highly unpopular among Germans, who so far have helped prevail on Chancellor Angela Merkel to refrain from backing the kind of agressive solution many economists are calling for.

Attitudes among the young are helping drive the general opinion. Older Germans have prized European integration for helping their country move beyond its Nazi past. They see integration as subsuming potentially dangerous nationalism into a wider identity and creating strong ties with neighboring countries.

But younger Germans see it differently. Many appear to take the European Union for granted or, increasingly, view it negatively. Their voices could become an important factor as the deepening euro crisis continues to slow Germany’s prodigious economic growth ahead of elections next year.

More from GlobalPost: Merkel reassures Greece as the euro zone heads into recession

Radmacher says the EU’s function in his peers’ everyday lives has become more important than its role in history.

“It’s common to travel without borders and pay with the euro everywhere,” he says. Although many are happy to enjoy those advantages, he adds, they’re not enough to generate enthusiasm for the EU project.

“Mostly you just hear about the crisis and never anything positive about Europe,” he says. “That’s why it’s a pretty unpopular topic among young people.”

Tim Lueddemann, head of the Green Party affiliated organization Green Youth, believes evidence of anti-euro sentiment among the young is unsurprising. “‘Europe’ often seems to be a big institution in Strasburg or Brussels,” he says, “that has little to do with real people.”

Young Germans are particularly pessimistic about the euro, even though many grew up with the common currency and have only distant memories of the Deutschemark.

Although Germany’s membership in the 17-state euro zone has contributed to the country’s economic boom, a recent survey of people aged 14 to 24 found only 51 percent felt the currency to be a success. Fifty-six percent believed the euro would fail in the longterm, while 52 percent said they could envisage a future without it.

The feeling that “we didn’t introduce it, we weren’t allowed to vote on whether or not to adopt it” helps drive the apathy, Lueddemann says.

Michael Kemmer, director of the Association of German Banks, which conducted the survey, said the numbers reflect a failure on the part of the country's political and business leaders. “We have to set ourselves the task of better explaining the euro’s advantages,” he explained.

Many point to the amount of contact young Germans have with other EU countries as a major influence on their views about the euro crisis and the union in general.

Florian Stoeckel of the Free University in Berlin cites a survey he conducted of students who participated in the Erasmus exchange program, which sends EU citizens to study elsewhere in Europe, saying they tend to support measures to help struggling countries more than the general population. Knowledge of other countries “really does change students, they become more open and more European,” he says.

Maria Kames, who studies classical archaeology at Humboldt University, echoes the common view that Germany’s troubled past “plays no role for me.”

Instead, it’s about coexisting on one continent. "You read the papers and all these stories about how Greece should leave the euro," she explains. "But when you actually talk to Greeks who say how terrible things are there, you really feel for them. We shouldn't cut ourselves off from others, we have to try to get on with one another."

Jonathan Old, a 17-year-old high-school student from the southern town of Schwaebisch Hall who’s taking part in a forum for young people on participation in Europe, says many struggle to find optimism about European integration amid a sense of ongoing crisis reinforced by negative press about the crisis.

“The positives about Europe are a bit lost,” he says. “But when you look back 50 years, you see how much has changed positively in Europe, that we can travel freely, that we are all richer and live in security.”

Susanne Karstedt, an official in the city of Ludwigsburg near Stuttgart who’s helping organize the forum, says getting young people to stop taking the EU for granted requires teaching them about the effort that went into post-war European integration.

“Many young people can’t begin to imagine what a long path it was for earlier generations,” she says.

That’s a critical lesson at a time German politicians are facing a tough balancing act between responding to public opinion and trying to forestall the euro’s collapse, something many believe would set back the EU project for decades.