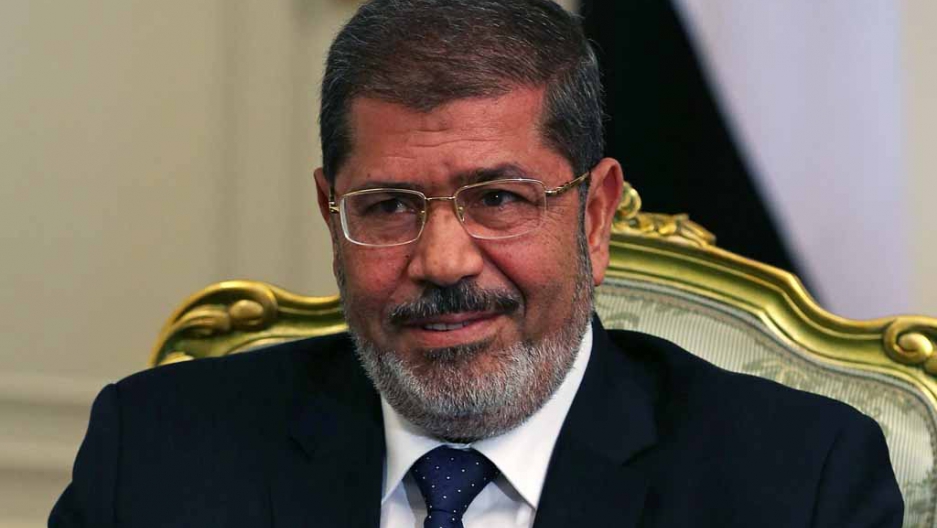 His historic visit to Iran, the first by an Egyptian leader in more than 30 years, signals his first move to plot a new course for Egypt’s post-revolution foreign policy.

"We express our solidarity with the struggle of the Syrian people against an oppressive regime that has lost legitimacy," Morsi said before the assembled delegates. “It is not only an ethical duty but a political and strategic necessity."

Iran has been a strong supporter of the Assad regime during the past 18 months of protest and violence in Syria.

NAM is a consortium of mostly developing countries that refused to choose sides during the bipolar politics of the Cold War. Greeted by Iranian President, Mahmoud Ahmedinejad before his statement about Syria, Morsi transferred Egypt’s chairmanship of the group to Iran, whose Islamic revolution prompted the two nations to sever diplomatic ties in 1979.

Both Iranian and Egyptian officials have told local media outlets there will be no bilateral meetings between Morsi and Iranian leaders. But his appearance at the summit, where he gave the convention’s first speech, marks the first symbolic shift in Egypt’s foreign policy since an uprising toppled former President Hosni Mubarak last year.

“It shows that his administration is trying to exhibit a different course than Mubarak’s administration,” said Ziad Akl, senior researcher at the Cairo-based Al Ahram Center for Strategic Studies. Mubarak, who ruled Egypt for 30 years, was staunchly anti-Iranian and maintained only limited ties with the leadership there.

“What was always seen as a provocative move is being made today. And I think this specific visit displays some kind of general direction for the Muslim Brotherhood,” of which Morsi was a longtime leader, Akl said. “[The Brotherhood] is very much keen to establish relations with Islamic states.”

Thursday's statement aside, the latest moves by the Cairo government may appear bold and un-allied initially, analysts say, but Morsi — just two months into his term and facing both economic and political instability at home — must still tread carefully in charting a new course with Iran.

He will need to tie his foreign policy initiatives into a larger regional political matrix that also reflects the needs and wants of old friends, Akl said.

Facing harsh, Western-backed sanctions for what some in the international community say is the Shia state’s nefarious nuclear weapons program, Iran is a long-standing foe of the United States, Egypt’s traditional benefactor.

In the oil-rich Gulf, Sunni monarchies like Saudi Arabia and Qatar want to contain Iranian influence on the Arabian Peninsula — and, by some accounts, are fighting a deadly proxy war against the pro-Iranian government of Bashar Al Assad in Syria.

Morsi can ill-afford to alienate either camp, observers and Brotherhood advisers say.

More from GlobalPost: Syrian conflict, a proxy war against Iran?

“We will be building new relations and defining new rules, and that includes with Iran and China,” he said, referring to Morsi’s three-day trip to China this week. “With Iran, there will be input from the international community, and will include specific inputs from the Gulf countries.”

Morsi’s office announced this week the president’s first foreign policy initiative: a working group on Syria that would include Iran, as well as Turkey and Saudi Arabia.

Not all believe, however, that the US will frown on Morsi’s overtures to Iran.

Akl says that Egypt, throughout the years, “has been a very honest courier for American foreign policy in the region.”

The US has warmed to the Muslim Brotherhood in Egypt’s post-revolution period, with Secretary of State Hillary Clinton even visiting Morsi at the presidential palace in Cairo last month.

At the NAM summit Thursday, Morsi devoted a strong portion of his speech to his stated goal of ending the bloodshed in Syria, calling the conflict an uprising against “an unjust regime.” The language is similar to that used publicly by US officials on Syria.

“Morsi could be trying to carry that [American] foreign policy with an Islamic cloak, an Islamic orientation,” Akl said. “He could be acting as some kind of portal for negotiations with Iran” on its nuclear program.

Despite the antagonistic relations in recent years, Egypt and Iran in fact have a long history together.

The Iranian shah, Mohamed Reza Pahlavi, married the daughter of Egypt’s King Farouk in 1939. The couple later divorced, but the shah, secular like Egypt’s subsequent presidents, maintained ties until he was overthrown by a popular Islamic revolution in 1979. He is buried at a mosque in Cairo’s old city.

Today, Iranian media is lauding the visit as a triumph for the Islamic state. And even Egypt’s civil aviation minister called for a renewal of direct flights between Cairo and Tehran, local media reports said.

Also in his speech, Morsi said he supports any country’s right to pursue peaceful use of nuclear energy.

But others are skeptical it will work, charging Iran will not back down from its larger regional plans.

“The graveyard of Middle East diplomacy is littered with failed overtures to Iran,” said Karim Sajadpour, senior associate and Iran expert at the DC-based Carnegie for International Peace, in an email.

“Like many before him, including most recently Turkish Prime Minister Erdogan, Morsi seemingly believes he can talk Tehran into curtailing its nuclear ambitions or its support for the Syrian regime,” he said. “He will come away empty handed.”