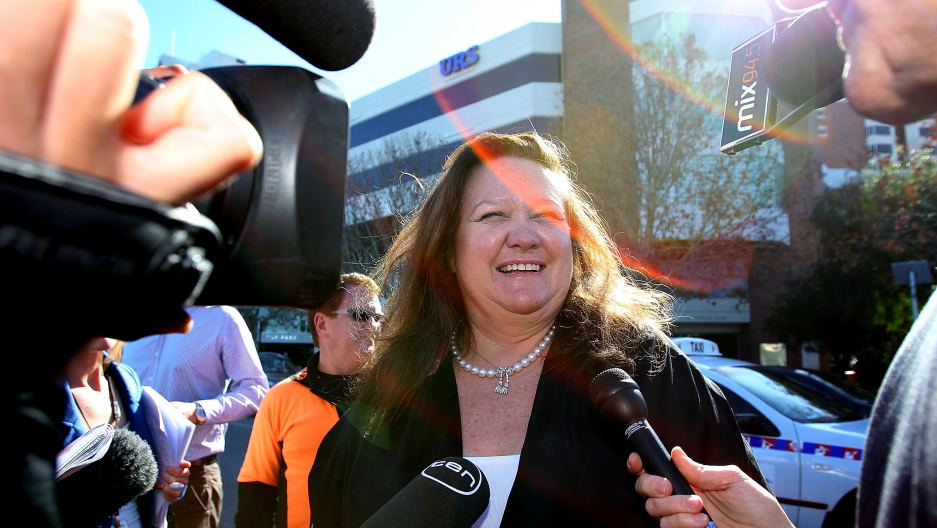 Australian billionaire Gina Rinehart, the world's richest woman, has told Australians envious of rich people that they should stop complaining, work harder, and cut down on drinking, smoking and socializing.

The controversial mining magnate, who also called for Australia's minimum wage of of $606.40 a week to be lowered, said billionaires and millionaires did more than anyone to help the poor by investing their money and creating jobs.

According to The Australian newspaper, Rinehart — who inherited mining tenements from her mining magnate father that are now worth $30.1 billion — wrote in her regular column in Australian Resources and Investment magazine that:

"There is no monopoly on becoming a millionaire. If you're jealous of those with more money, don't just sit there and complain. Do something to make more money yourself — spend less time drinking or smoking and socializing, and more time working. Become one of those people who work hard, invest and build, and at the same time create employment and opportunities for others."

Rinehart also called for cuts in taxes for Australia's wealthier individuals in order to stimulate employment and less regulation on business.

And she blamed what she described as "socialist," anti-business policies of Australia's Labor government for the plight of Australia's poor and warned that the country risked heading down the same path as European economies.

"Those who hurt the most when investments are killed off by taxes, green tape and socialist policies that are not friendly to business or conducive to investment are those who usually vote for the anti-business socialist parties. And for them, the price is very high. It's a job lost, when they have few savings, a mortgage to meet and children to clothe and feed. The millionaires and billionaires who choose to invest in Australia are actually those who most help the poor and our young."

Agence France-Presse quoted Treasurer Wayne Swan as saying: "These sorts of comments are an insult to the millions of Australian workers who go to work and slog it out to feed the kids and pay the bills."

Rinehart clearly regarded Australians as "lazy workers who drink and socialize too much," added Swan, an outspoken critic of Australia's mining tycoons.

"At the same time as trying to import cheap foreign labor and avoid paying tax, Rinehart claims it's millionaires and billionaires who are the greatest for social good," Maher said, according to AFP.

"What planet is she living on? She should spend less time ranting and more time sharing."

The Greens party simply pointed out that Rinehart had "accumulated wealth from her family."

He told The Courier-Mail that while Rinehart was "entitled to her views,'' he feared she may have reignited bitter debate of the "billionaires vs the rest of the world."

"And I'd hope we would all get more money at the end of the day for our hard work, not less. I don't think the base wage is enough. I think we need to do more to increase the base wage."