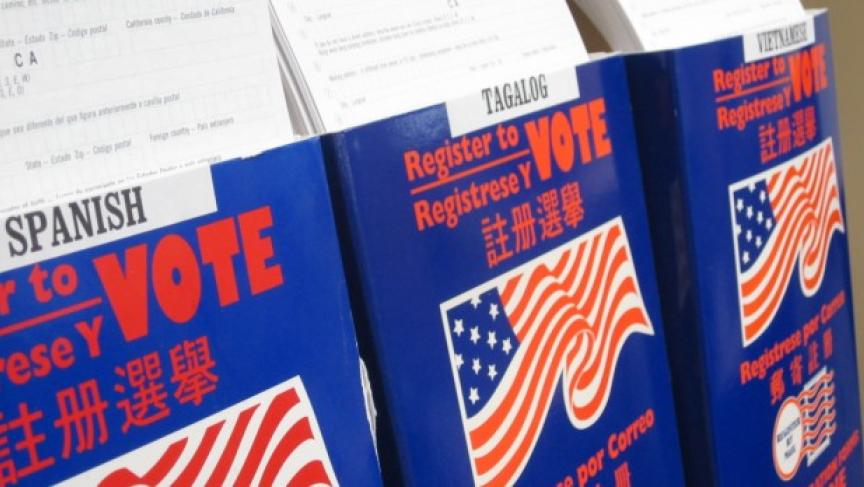 Share
When Americans go to the polls come November, millions will be voting in languages other than English. Voting jurisdictions are required by law to provide bilingual ballots and language assistance when 5 percent of the population does not "understand English adequately enough to participate in the electoral process." That's been the law since 1975. It may be the law, but many counties and states don't comply. And when the topic came up at a Republican presidential debate in January, Mitt Romney spoke out against bilingual ballots. Losing access to a bilingual ballot could harm people like Philip Van, a political refugee from Vietnam who moved to California in 1979. Van grew up speaking Chinese and Vietnamese. Six years after he arrived here, Van had to demonstrate some English proficiency to become an American citizen. But learning English as an adult, then voting in this new language wasn't so easy. Sure, he could easily choose between two candidates, but deciphering propositions and bond measures, that was tough. "I have to take a lot of time to read it (the ballot). And then I check with people, where we need to understand more clearly, what is good and what is bad." Van says many new Americans are afraid to vote in English, afraid they'll make a mistake. Van lives in San Francisco, which now offers trilingual ballots in English, Chinese and Spanish. Is it easier for Van to vote now? "Yes. Because a lot of people, even though they are well educated, they are engineers, they are doctors, but for new immigrants, maybe they don't quite understand about the political stuff." When multilingual ballots are offered, more people vote. Eight years ago, San Diego County began providing Vietnamese voting assistance. The results were immediate and dramatic. "Voter registration for the Vietnamese community increased by 30 percent," said Carlo De La Cruz with the Asian Law Caucus in San Francisco. De La Cruz said bilingual ballots are crucial today as the US becomes more diverse. Nationwide, one in three Asian Americans struggle with English. "And that means that over 30 percent of our population needs some kind of assistance when it comes to being able to navigate our democracy and the political system," said De La Cruz. The Moral vs. The Legal But not everybody thinks American voters should get this assistance. At a Republican primary debate this past January in Florida, Newt Gingrich said ballots should only be in English. Mitt Romney then said, "I think Speaker Gingrich is right." Romney continued, "Look, English is the language of this nation. People need to learn English to be able to be successful, to get great jobs. We don`t want to have people limited in their capacity to achieve the American dream because they don`t speak English." Six years ago, Congress reauthorized the language provision of the Voting Rights Act. A group of conservative Republicans mounted a campaign to stop it from happening. But the measure easily passed the Republican-led Congress and was signed into law by President George W. Bush. Bruce Adelson — a former senior attorney with the Justice Department and now CEO of the company, Federal Compliance Consulting — said this ship has sailed. "Whether you agree with it or not, whether you think every American citizen should speak English or not, those are very valid points. But the bottomline is: The law is the law. This law has been tested, evaluated, challenged. It's withstood all of them." The law might be the law, but that doesn't mean all jurisdictions comply. In the past decade, the Justice Department has filed complaints against 35 cities and counties for violating election language provisions. "These cases can be very expensive to litigate and to deal with," said Adelson. "And I always advise election officials, it's much better to comply voluntarily, then to get the dreaded call, letter, or e-mail, from the Department of Justice, from my old friends, saying essentially, we're going to come to visit you because we think you're violating federal law." Problems with Compliance But if voting jurisdictions know this, why then do they violate the law? Just across the bay from San Francisco, Alameda County violated the language provision of the Voting Rights Act last year. The county, which is home to the city of Oakland, has a large immigrant population and is required to provide language assistance in four languages: Spanish, Chinese, Vietnamese and Tagalog, the major language spoken in the Philippines. County officials say they weren't thumbing their noses at the law. Cynthia Cornejo, the Deputy Registrar for Alameda County, said the county was required to provide about 1,000 bilingual poll workers — again, in four languages — for the June primary. "We assessed probably close to maybe 2,200 people, just to see if they could read, speak, write the language. Then we had to do an enormous outreach effort, all the way almost until the week before the election, and try and hit our numbers. And then train them also." In June, Alameda County again failed to meet their legal obligations for Chinese and Tagalog poll workers. Cornejo said they're scrambling to cover 785 polling stations, and that's not just for federal elections. "Odd number years are no longer a lull, we could have anywhere from two to six elections on any given year." Groups like the Asian Law Caucus recognize the strains on Alameda County. But they're not letting election officials off the hook just for trying. "Because potentially it means the disenfranchisement of hundreds of thousands of voters within Alameda County," said Carlo De La Cruz. Across the nation, 247 other jurisdictions in 25 states will also be required to provide language voting assistance this November. That covers 19 million Americans who could use help voting in a language other than English.