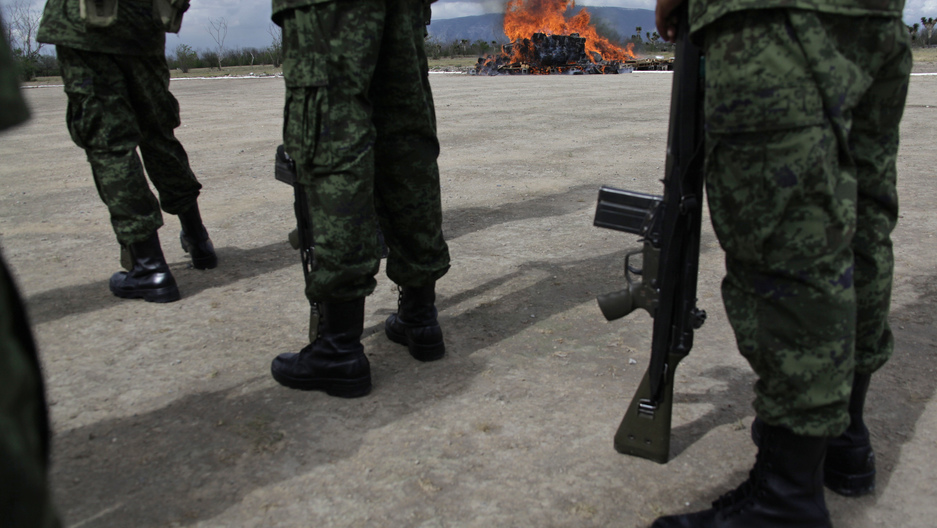 Soldiers stand in formation as a pile of marijuana and other drugs are incinerated in Mexico. (Photo by Daniel Becerril/Reuters.)

Texas-based reporters are filling the void left by Mexican news organizations that seldom cover their country’s drug war for fear of death or extortion at the hands of the powerful cartels.

Local residents have come to rely instead on Texas news outlets for information. A tight network of witnesses, social media reporters and Texas-based journalists work together to report on the violence. And there's plenty of it to report on.

The Tamaulipas-Texas border runs from the sister cities, known as the two Laredos, to another bi-national borderplex, Matamoros-Brownsville, near the Gulf of Mexico. This particular stretch of border contains lucrative corridors for both legal and illicit trade.

The Mexican side has seen some of the worst urban firefights in the ongoing drug war. Many shootouts occur in broad daylight, and some can be heard clearly from the Texas side of the river.

"When I was at the Herald, our office was (in) downtown Brownsville, a few blocks away from the bridge," said Ildefonso Ortiz, a Tamaulipas native who works as a reporter in Texas. "And if you're hearing gunfire, you know something bad is happening."

Ortiz works as a crime reporter at the McAllen Monitor, but he was at the Brownsville Herald when violence along the border got out of hand.

Sergio Chapa, another reporter in the Rio Grande Valley, says the situation across the river changed dramatically in early 2010. That's when Osiel Cardenas, the former leader of the Gulf Cartel, was sentenced in Houston to 25 years in federal prison.

"The created a split between the Zetas and the Gulf Cartel — the former allies, now bitter, bitter rivals and enemies," Chapa said. "What that did to our region is it just changed it forever."

Things got a lot more violent south of the border after 2010. Chapas says one of the consequences was a media blackout in Mexico, as cartels bought off and attacked traditional media outlets into silence.

Chapa works for KGBT, the CBS affiliate in the Rio Grande Valley. He says his station still covers events on both sides of the border. In 2010, KGBT started to integrate Facebook and Twitter into its coverage. Both were immediate hits.

"A lot of it was driven from people from Mexico wanting to know what was going on in their communities and their neighborhoods that their local media couldn't report," he said.

But Tamaulipas citizens have turned to social media to generate information as well. Twitter users in particular have developed their own alert system to warn each other about risky situations like shootouts, grenades or the presence of large groups of armed men in plain clothes.

Chewy, an active member of the citizen alert system in Tamaulipas, says social media is the only way residents can find out about dangerous situations in real time.

The lack of coverage in the local media allows government officials to dodge their responsibility to give explanation. Officials have called the citizen reports, "the product of collective psychosis."

Chewy says when journalists on the U.S. side of the border pick up, give credibility and apply journalistic rigor to the citizen reports in Mexico, it helps validate the information that officials often ignore or minimize.

The Texas-based reporters who cover Tamaulipas vet the information that comes through the social media alert system and try to supplement it with official on-the-record statements. But Ortiz says doing so is rarely easy.

"Official channels are not going to put out what's really happening," he said. "That is one of the reasons why there's such a gap in information."

Another complication is the de-facto ban many Texas outlets have placed on their reporters crossing into northern Mexico for work-related purposes. That's where social media users like Chewy can again help fill in the gaps.

"It's like teamwork," he said about the relationship with Texas-based reporters. "They support us by documenting the story and we support them by giving them details about the events."

The outlets where Ortiz and Chapa are English-based. But both reporters use their Twitter accounts to make sure relevant news gets out in Spanish as well. Chapa says both methods provide Tamaulipas residents with the news local reporters can't safely cover.

"Our signal doesn't stop at the river," he said. "It actually continues and goes very deep south into Mexico, almost an hour and a half south of the border. People can turn on and see our television broadcasts if they so choose."

Neither the drug-war violence or the restrictive climate for press freedoms in Mexico are situations that appear to have quick solutions. But at least the media partnerships in Tamaulipas provide some hope that citizens and journalists on both sides of the border can work together to get a story out and help their communities stay informed.