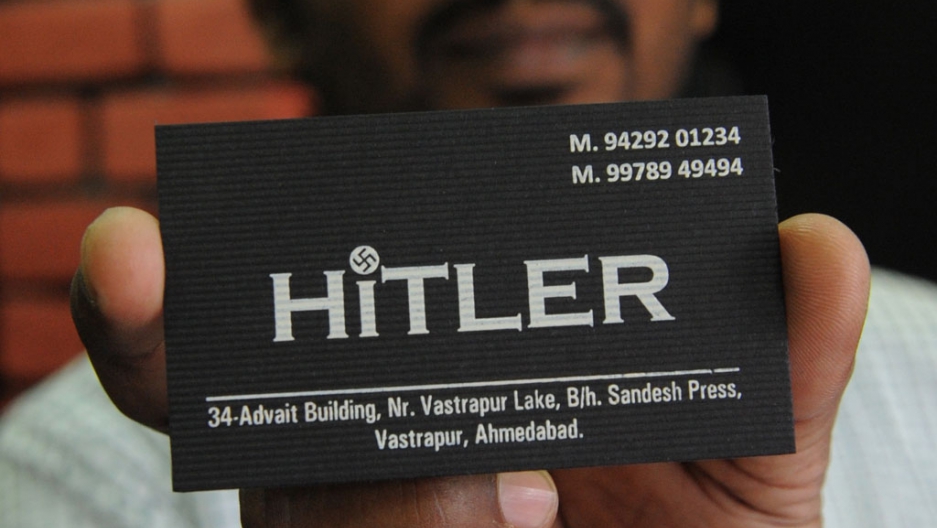 One of the two Indian owners of the 'Hitler' clothing store - Rajesh Shah - poses with a card at his shop in Ahmedabad on August 28, 2012. Members of the Jewish community in the western Indian state have urged the shop owners to change the name of the store, which was opened on August 19, 2012. Prior to this a banner with the wording "Hitler opening shortly" was used by Shah and his co-owner to publicise the opening of the shop.
Credit: AFP
Share

Two Indian men had no idea their new business would cause so much controversy; after all, it’s a simple clothing store – called “Hitler.”

Rajesh Shah said the title is a reference to his business partner’s strict uncle, who everyone dubbed “Hitler” for his authoritarian attitude.

“We had put up a cloth banner for over a month saying ‘Hitler opening shortly,’ no one objected to the name then,” Shah told The Times of India. “Frankly, till the time we applied for the trademark permission, I had only heard that Hitler was a strict man. It was only recently that we read about Hitler on the internet.”

Jewish groups in the city of Ahmedabad, India – home of Mahatma Gandhi – suggest Shah is, at best, ignorant of Adolph Hitler’s murderous history.

At worst, they say, Shah is trying to cash in on Hitler’s curious popularity in India.

“Youngsters need to be told of the atrocities that Hitler committed and the millions who were killed in gas chambers more than 70 years ago,” Nikitin Contractor of Friends of Israel told the TOI.

What’s working against Shah is the Swastika used in Hitler’s logo.

While it’s a popular Hindu symbol loosely translated from Sanskrit as, “life is good” or “there is meaning,” it often it appears flat on one side when used in religious references.

The Nazi party adopted the swastika, but tilted it 45 degrees, just as it appears in Shah’s sign.

Shah told the TOI he would change the logo and name, but he’s already spent hundreds of dollars and would need someone else to pay for the alterations.

This isn’t the first Nazi reference to appear in India.

A café called “Hitler’s Cross” opened in 2006 and last year Bollywood released a movie called “Gandhi to Hitler” about India’s move away from British colonial rule.

More from GlobalPost: Echoes of Hitler