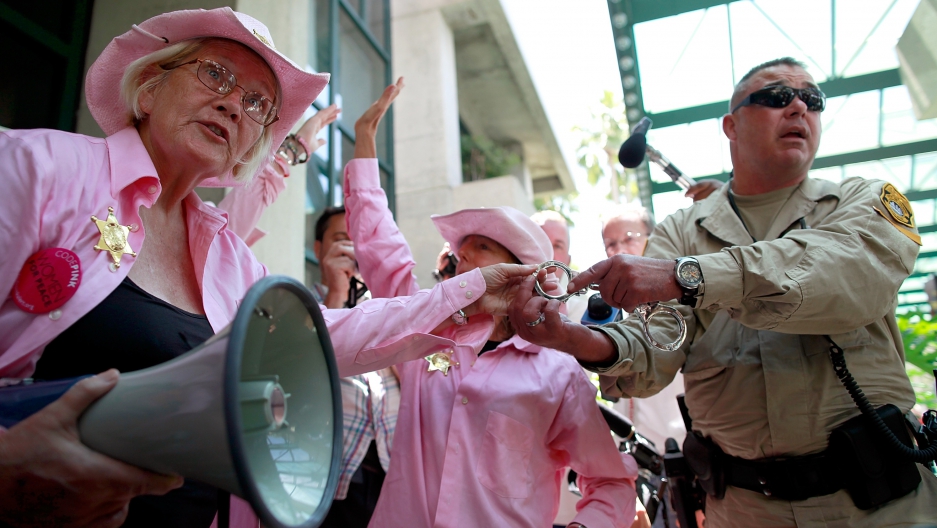 CODEPINK protesters interact with police at the Stratz Center for the Performing Arts on Aug. 28, in Tampa, Florida, as the Republican National Convention continues.
Credit: Tom Pennington
Share

I had heard it all many times before.

In a nutshell, it boils down to “traditional values will save you, and President Barack Obama is ruining the world.”

“Graduate from high school, work hard, and get married before you have children and the chance you will ever be in poverty is just two percent,” said Santorum. “The fact is that marriage is disappearing in places where government dependency is highest … if America is going to succeed, we must stop the assault on marriage and the family.”

The response in the hall was muted, something that was apparent to my fellow journalists in the peanut gallery.

“Not even these people are buying it,” muttered a scribe from Philadelphia.

Only one moment lit up the crowd — when Santorum touched on abortion: “I thank God that America still has one party that reaches out their hands in love to lift up all of God's children — born and unborn,” he said, to thunderous applause.

But as Santorum wound down his speech, a commotion could be heard in the upper reaches of the cavernous hall. A young woman was screaming at the top of her lungs, although her words were indistinguishable to many down below.

It was Alli McCracken, coordinator for the Washington, D.C. office of CODEPINK, a women’s organization dedicated to “working to end the war in Iraq, stop new wars, and redirect our resources into health care, education and other life-affirming activities.”

McCracken, just 23, created quite a commotion.

“I got to speak for three or four minutes before they escorted me out,” she said.

Her message was simple: If you claim to be pro-life, then do things that strengthen life. Stop the wars, help women get access to quality health care. Make education affordable.

“I don’t think Rick Santorum is any worse than the rest of them,” said McCracken. “They are all egregiously offensive in their own way.”

McCracken was dressed quite conservatively for the occasion – sadly, she was minus the bright pink vagina costume in which she has been roaming Tampa’s streets for the past few days.

She was also cagey about how she got into the Tampa Bay Times Forum, a tightly secured area to which only credentialed delegates, guests and media have access.

“I had credentials,” is all she would say.

But she was not at all reticent about her mission and her message.

“I want the GOP to stop this war on women,” she said.

McCracken was taken out of hall by the security personnel, who, she says, were “super nice” to her.

“One of them took me right to the perimeter, and I told him about what we were doing,” she said. “We made friends, and he told me I was really brave.”

On Wednesday afternoon, McCracken and her cohorts were marching in a Planned Parenthood rally in Tampa, this time decked out in their usual gear.

“There are pink flags and banners all around and we feel right at home,” she said.

Asked whether she or other CODEPINK activists would be on hand for Paul Ryan’s speech or other activities at the Tampa Bay Times Forum Wednesday evening, she just laughed.

“I can neither confirm nor deny,” she said.