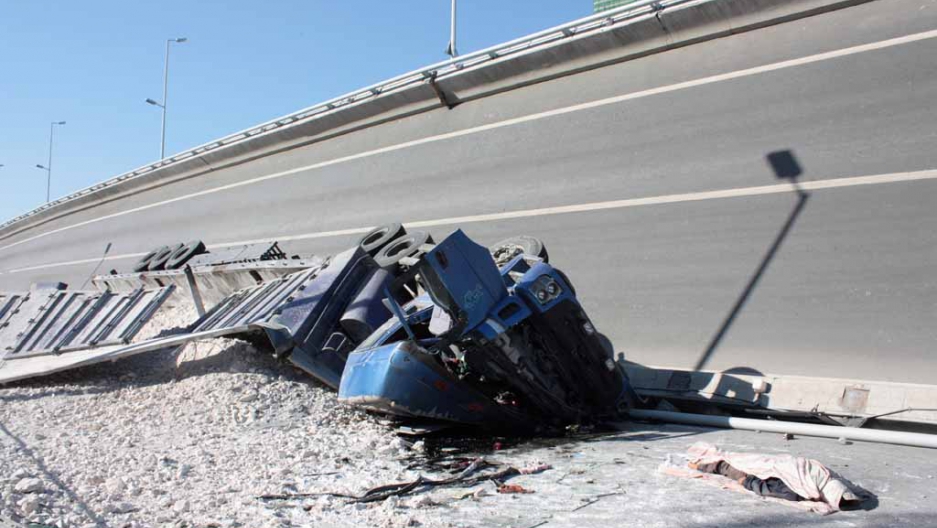 A body lies near to a crushed truck, situated under a collapsed eight-lane suspension bridge in Harbin, northeast China's Heilongjiang province on Aug. 24, 2012.
Credit: AFP
Share

HONG KONG — Americans may see a lot to envy in China’s gleaming new infrastructure, but Chinese are growing angry that so much of it seems to have been shoddily made.

A string of recent bridge and building collapses in China has generated fierce debate about the use of hundreds of billions of dollars on infrastructure investment in the government’s response to the financial crisis.

On Saturday in Guangzhou, a prosperous southern city, a fire department building that was under construction bent, buckled and disintegrated into rubble, killing four people. Many people, including one survivor, said that hasty construction was to blame.

One day before, three people were killed and five injured when a whole section of a 10-month-old bridge in northern China toppled over, tossing four trucks down almost 100 feet. The bridge was nearly new, having opened in November, after construction costs of $300 million.

According to Xinhua, the official news agency, it was the country’s seventh bridge collapse in a little over a year.

While officials typically blame overly heavy trucks for such disasters, Chinese observers believe corruption plays a part. Users on Weibo, China’s equivalent of Twitter, poured skepticism on the officials' insistence that the bridge was built correctly.

“Just three overloaded trucks can’t even pass? It’s obviously a [construction] quality problem,” writes one user, in a translation by NetEase. “It was built just last year. Corruption, skimping on the work and materials.”

More from GlobalPost: China's bridges and dams crumble under corruption

One user on Weibo wrote that this unreliability is “the reason why our country’s products have such difficulty establishing themselves internationally,” in a translation by ChinaSmack.

Many users called it a “tofu project," a common term used to describe cut-corner constructions, most notoriously in the Sichuan earthquake of 2008, when thousands of "tofu" schoolrooms collapsed, killing thousands of children.

Others reflected more broadly on what the spate of collapses says about China today.

Li Chengpeng, a widely-read blogger, wrote a post that was shared 44,000 times in which he lambasted today's China where “the completion of an infrastructure project lays the groundwork for the beginning of an anti-corruption project,” according to a translation by Tea Leaf Nation.

“They nab corrupt officials every day, and bridges collapse every year, nothing new under the sun,” he said, comparing the rule of law in the country to a deadly stretch of highway in which warning reflectors had been installed backwards. “That’s a pretty good illustration of the establishment of China’s rule of law. It’s also a good illustration of everything in China.”

Another writer on Weibo contrasted the broken 10-month-old bridge with San Francisco’s 70-year-old Golden Gate Bridge, concluding that China is a “country where someone walking on the street can be burned to death, drowned, or fall to their deaths in a deep hole, where cargo trucks driving on a bridge can suddenly vanish, [and] it truly isn’t easy for the ordinary common people to survive.”

Much of this infrastructure was created in a massive building boom spurred by government stimulus. After the 2008 financial crisis, Chinese authorities unleashed nearly $600 billion of stimulus spending. Now, many are asking how much of it was wasted.

Michael Pettis, professor of economics at Peking University in Beijing, has said that the majority of China’s investment in infrastructure is worth less than was spent on it.

Yichuan Wang, an economics blogger and student at the University of Michigan, believes that investing in people instead of buildings would be a much better use of China's money. “Instead of just focusing on ‘building,’ I want [the Chinese government] to invest in human capital," he writes, "so productivity can be at a level that we don't need ‘make work’ jobs.”