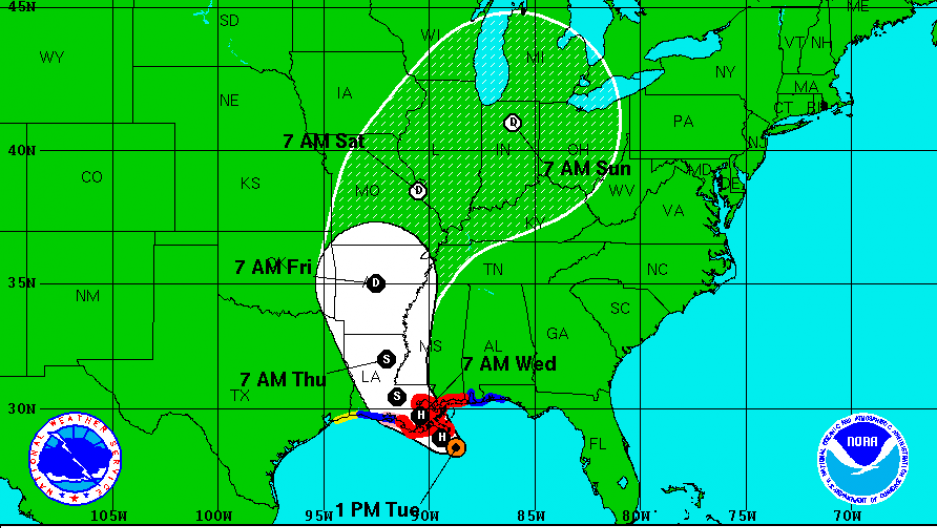 Now-Hurricane Isaac continues to swirl in the Gulf of Mexico, getting stronger as it moves toward Louisiana, but projected to make landfall less strong than had been thought as recently as Monday evening.

According to the latest information from the National Hurricane Center, the storm is expected to make landfall southwest of New Orleans sometime Tuesday evening or overnight. Wind speeds are expected to top out around 80 mph, making it a weak hurricane.

Already, though, there were reports of storm surge pushing several feet of water ashore across the coasts of Louisiana, Mississippi, Alabama and the Florida panhandle. The storms' strongest portion, the east side, is expected to cross near or over the New Orleans area, dropping as much as 17 inches of rain on the city, which is already below sea level.

“The slow motion and the large size of this system are the areas of concern,” Rick Knabb, director of the National Hurricane Center, said to The New York Times, “because even if it’s not a hurricane, it is still capable of producing significant storm surge and inland flooding.”

President Barack Obama made a brief statement at the White House on Tuesday, where he urged Gulf Coast residents to make preparations for a "dangerous storm." He said federal authorities have moved emergency resources into the area so they're available as needed.

“We are dealing with a big storm, and there could be significant flooding and other damage across a large area. Now is not the time to tempt fate," he said.

Obama said Federal Emergency Management Agency officials have been preparing for the storm for a week, and urged residents to evacuate if told to by authorities.