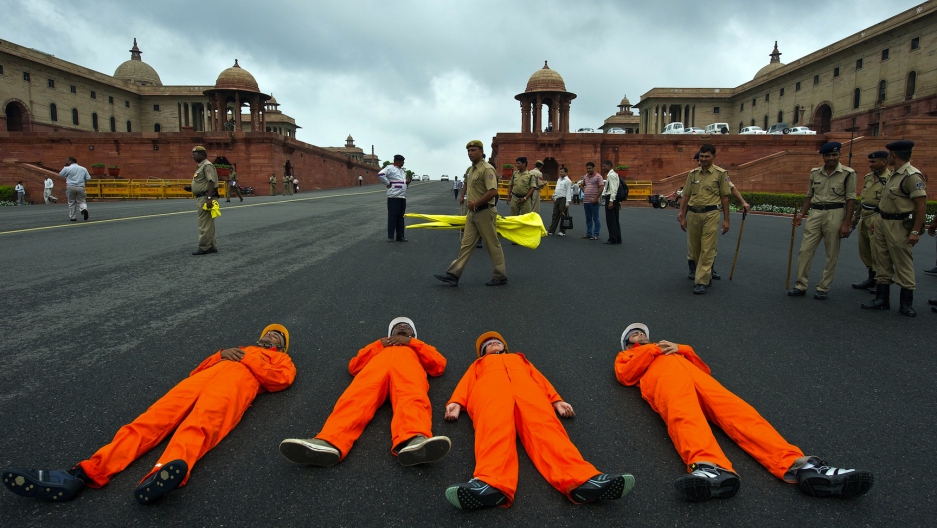 Greenpeace activists dressed as coal miners lie on the ground during a protest near Parliament in New Delhi on August 21, 2012 against alleged corruption in the allotment of coal mining blocks. A recent survey revealed that most Indians think corruption is the biggest problem facing the country, but it's not an election issue because they also think all parties are equally corrupt.
Share

India should stop obsessing about how to become one of the world's great powers and focus on solving its biggest problems to become a great nation, Sundeep Wasleka, the president of Strategic Foresight Group, writes in this month's Forbes India.

At present, regardless of the hype, India is failing, Wasleka suggests. Politicians and business leaders are always thumping their chests over India's rising importance in the G20 and lobby for a new G10 (the G8 plus India and China). But 200 out of the country's 600 districts are infested with Maoist revolutionaries who know full well their strategy for changing the country is tantamount to suicide. And while China has (belatedly) made its great leap forward, India is still limping two steps ahead and then stumbling back one.

Good questions, which the writer doesn't exactly answer. But he does offer some solutions. Or what I'll call:

When Turkey's Recep Tayyip Erdogan of the AK Party came to power, the country was ruled by military elites, and regular people had to lump it. But Erdogan decided to change the country's political and economic future by changing the mindset of its leaders.

On assuming power, Erdogan moved into a two-storey house in downtown Ankara and ruled that all ministers and members of Parliament ought to live in their own homes. In a speech delivered at the Turkish Parliament he argued, “If you want to be representatives of people, you must live and work with your people.” He then proceeded to take away other privileges they enjoyed.

He followed it up by calling in people from the construction business and asking them to reduce invoices he reckoned were inflated or face being blacklisted for all government projects. He also made it clear that any compromise on quality, durability or deadlines in building roads, dams or other projects with public money would attract severe penalties.

He then moved to provide special grants to the poorest and incentives to small businesses in an attempt to provide a fillip to the rural economy. He issued orders that his government focus on education in the most backward provinces of Turkey. Five years was all it took to effect a transformation. The party came back to power in 2007 and again last year. It was the kind of change that took Southeast Asian countries almost two decades.

Can it happen in India? It looks as though it could, if you compare two Himalayan states--Sikkim and Jammu & Kashmir.

Both lie in the lap of the Himalayas. Sikkim has the Chinese to contend with and J&K the Pakistanis. Sikkim has Christians and Buddhists and J&K has Muslims, all national minorities, as the majority population and both have had controversial histories of accession to India. Both remain poor.

But Jammu & Kashmir has been plagued by insurgency and violence while Sikkim is one of the most peaceful states in the country. This, in spite of the fact that Kashmir gets more Central funding than Sikkim! Probe deeper and you realise this is a function of the relationship between the rulers and the common people.

Sikkim’s economy is balanced towards development. The society there has worked out an informal contract and the emphasis is on a balanced relationship between the leadership and the people. In J&K, inequality has existed since the 1950s, with one family calling the shots.

Two-thirds of Indians work as farmers, yet they account for only a fifth of GDP -- and they live in dismal conditions, with little chance of upward mobility, for the most part. Why so?

One of the reasons why this discrepancy exists is because farmers experience trade barriers, like the Agricultural Produce Market Committee (APMC), which puts serious restrictions on whom they can sell to. And solutions that exist in the form of co-operatives often operate as monopolies in the hands of political families who do everything they can to prevent the competing co-operatives.

What to do about it?

If growth is the mandate, the agricultural economy has to be liberalised and producers set free. Because when farmers and rural industries have access to a steady income, they will invest in improving productivity. That, in turn, will push everybody into building a country where the ruling class and citizens are equals.

To start the process, though, one question needs to be answered. Do you expend energies into getting into the Top 10 in terms of GDP? Or do you focus on getting the Human Development Index (HDI), where India has consistently ranked below 120, to higher levels? What a low HDI means is that for all the GDP growth and the consequent prosperity, development is superficial at best.

The reason India doesn't have its own Apple or Samsung isn't because the country's leading minds are focused on stripping products down to their essentials to hit the market at the bottom of the pyramid, Waslekar argues. It's because industry isn't paying enough attention to research that doesn't have immediate impact on their company's bottom line.

In the next two to three decades, the fourth industrial revolution will be underway. The first industrial revolution took place in late 18th Century, the second in the late 19th Century, and computerisation is the third. The fourth includes genomics, nanotechnology and robotics (GNR). These apart, expect breakthroughs in space technology, renewable energy and water technologies. All of these will transform the world.

India has to decide whether it wants to be a great power by servicing multinationals and providing software engineers who work at the low end of the cost curve, or be a lead player in the new revolution.

India's government-run schools are terrible, and education faces a drastic shortage of teachers across the board. But the government isn't doing enough to utilize community radio stations and its satellite network to enable distance education for anybody who's interested, Waslekar argues.

If this technology were deployed into education, a few crore of rupees and the 700,000 villages with no access to schools suddenly become accessible. India has a satellite in orbit as well, which is meant to be used exclusively for education. Any institution can use it to impart remote education to children in Naxalite-affected areas in central and northern India; or to the schools located in difficult-to-access regions such as the North East.

Never mind the contradictions, in this one.

Turkey made itself a key feature in its neighborhood by inking a free trade pact with Syria, which meant that when Syria chalked out a peace plan with Israel, Damascus insisted that Turkey would be the interlocutor.

On the other hand, terrorists never think of attacking Norway or Sweden because "their objective was not to build a security infrastructure because there is only so long and so often it can counter attacks; but to build nations nobody thinks of attacking."

Huh? So India should shoehorn its way into international disputes, like Turkey. But at the same time remain on the isolated fringe, like Sweden? All while sitting sandwiched between Pakistan and China, while the US makes a play to take back the Pacific?

He lost me there. But the article still merits a close reading.