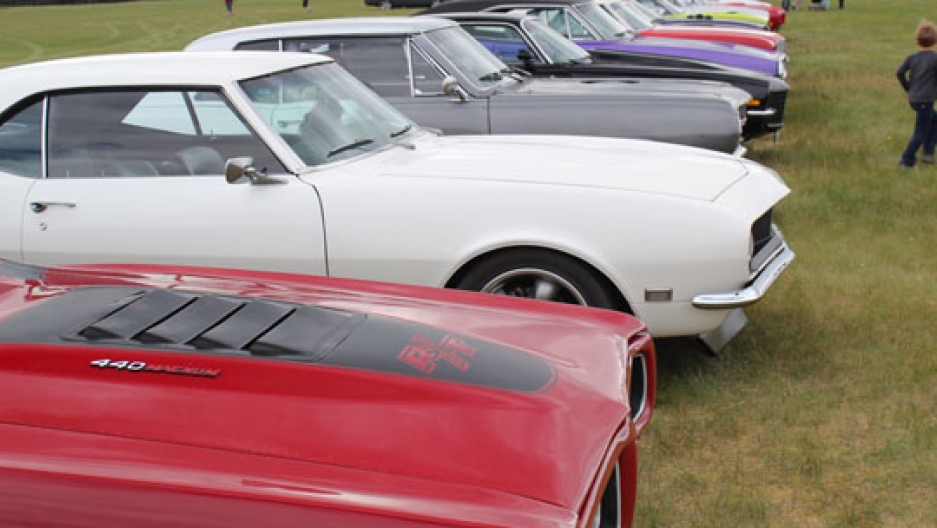 Share
Swedes caught onto the classic American car craze more than half a century ago. The country boasts more restored 1950s classics than the US, according to some estimates. An estimated 5,000 classic cars — such as Pontiac Silver Streaks and Plymouth Road Runners — are shipped to Sweden each year. And the fervor built around these cars is fueling a subculture of American nostalgia in Scandinavia. Ulf Witasp, 46, was just a kid when he started obsessing over "mopars," or American muscle cars outfitted with Chrysler's special line of motor parts. "When I was 10, there was illegal street racing in my town, RÃ¤ttvik," he said. "It was a '68 Hemi 'cuda, which is very, very rare. And the other car was a '71 Charger RT. Both mopars. So I became a mopar man." Witasp is among thousands of muscle car diehards in Sweden. He organized this annual muscle car event in the quiet mountain village of Orsa. Owners of Ford Mustangs and Plymouth Barracudas show off their gleaming hot rods in a big grass field. Others take turns racing down an airstrip. These cars were once driven on American roads. They were ditched in the mid-1970s for more modern and fuel-efficient models. They then started turning up overseas. "We found out that these cars were almost for free, so we went over and bought them," Witasp said. These days, hobbyists like Hasse Eriksson are buying their cars online. Eriksson owns a 1969 Chevy Chevelle and 1970 Buick Elektra, but he's never set foot in the States. "I'm interested in all American cars and I have one from Riverside, Los Angeles, and one from Texas," Eriksson said. This car craze thrives here for a couple of reasons. For one, in rural Sweden, big barns and large garages provide enough elbow room to restore these classic cars. Then there's the sheer size of the cars, according to Ulf Witasp. "The good thing with cars from the '50s is that they were big, you could get in 10 people and drink beer. Because in Sweden, we can drink beer while we are in the car." The whole car craze spawned a subculture here — Raggare. Fredrik Tillberg, now 40, has been living the raggare lifestyle for the past decade. For many raggare, that means picking up chicks, chugging cheap beer, and riding around in a classic American car crammed with friends. But Tillberg had to sell his 1969 Dodge Dart for a more family-friendly set of wheels. "My girlfriend is into these old cars and I hope my four children all like it when they grow up," Tillberg said. Another popular American export you can hear on raggare car speakers is rockabilly — though many of the bands are Swedish. Morgon Karlsson caught the rockabilly bug at 13. Today, he's 33 and sports a pompadour. He sells the rockabilly look — crisp dress shirts with checkered collars — at car shows across Sweden. "Pretty much, this is a way to help me to buy a car again." The car he wants is a 1959 Cadillac that needs a lot of work. It costs about $50,000. "You have to put in at least the same amount to get 'em rolling and get 'em in good shape," Karlsson said. "You can never get that kind of feeling in a new car. That's for sure."