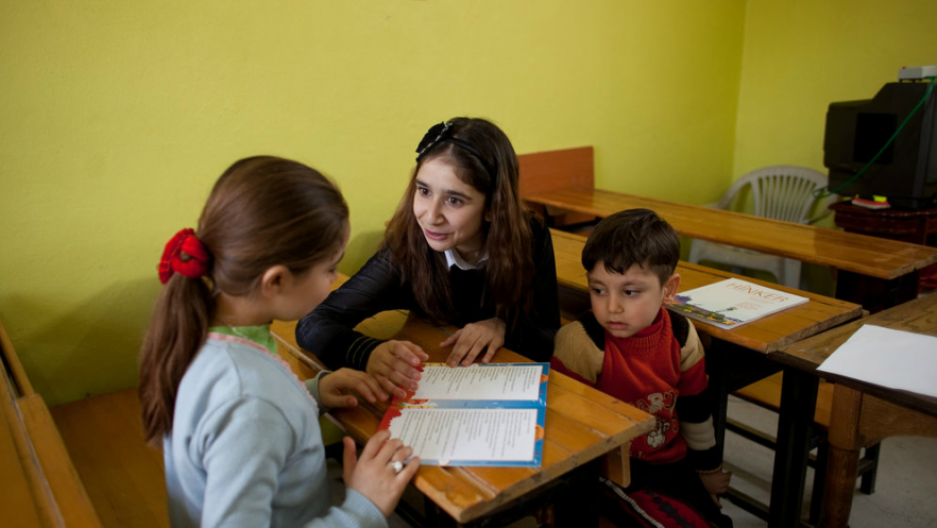 Medya Ormek teaches Kurdish to a girl in one of her classes. (Photo by Jodi Hilton.)

Speaking Kurdish in Turkey used to get you in a lot of trouble.

In 1991, a Kurdish politician was jailed for 10 years for taking the oath of office in Kurdish. Turkey had banned speaking Kurdish in public places. As a result, Kurdish children in Turkey didn’t speak Kurdish in school, and sometimes their parents didn’t speak it at home, so many young people grew up without a firm grasp of the Kurdish language.

But one young teacher in the southeast Turkish city of Diyarbakir is trying to remedy that. Medya Ormek is not your typical teacher. She’s only 13-years-old.

"I am teaching Kurdish to my friends, because they don’t know it. They don’t speak Kurdish with their families, and they only speak Turkish in school," she said.

At home, Medya’s family only speaks Kurdish, so when she started school, she couldn’t understand much. She said she cried every day, because she couldn’t talk to other kids. Even though many of her classmates were Kurdish, she said they were never taught the language.

"So I told them to come over and let’s play some games in Kurdish," she said.

Medya and her friends started to play with dolls, and she started to teach them Kurdish.

Turkey has a history of conflict with the Kurdish language. There are an estimated 15 to 20 million Kurds in Turkey, and the government has long viewed Kurdish identity as a threat to the country's stability.

In recent years, Turkey has eased restrictions on Kurdish. Still, many Turkish Kurds are wary.

Recently, the mayor of Diyarbakir was investigated for putting up municipal signs in Kurdish as well as Turkish. But several people in Diyarbakir said they would never speak Kurdish in a municipal building or to a policeman.

Medya’s classroom is a small room on the roof of her family’s home. Above the door is a plaque that reads “The Classroom of Cigerxwîn” – a famous Kurdish poet and nationalist. There is a dry erase board in front of several wooden benches.

Medya teaches “academic” Kurdish, as opposed to street Kurdish, which essentially means no stray Turkish or Arabic words are allowed.

She started teaching when she was 7.

Sometimes her students would be several years older. She said that if kids acted up in her class, she had to call in one of her older brothers to help with discipline.

What started out as four friends playing with dolls has grown into as many as 30 students. Now people in the street stop her to thank her, Medya said.

"They like what I do. They say ‘Bravo!’ for teaching our language. But when they say this, they’re speaking to me in Turkish," she said.

Not everyone is pleased with her classes, though. In 2009, Medya gave out graduation certificates to her friends — modeled on Turkish school certificates. A few days later, police knocked at the door.

Medya was only 9, too young to be arrested, but a case was brought against her parents.

They were accused of “slandering the Turkish state,” which carries a six-year prison sentence. The case was dropped, but Medya’s father, Kasim, remains nervous about what might happen to his daughter.

She’s his youngest of eight.

Kasim has reason to worry. One of his sons is a member of the PKK — the banned Kurdish rebel group.

Still, Kasim is proud of his daughter. He even introduces himself as the father of “Teacher Medya.” But he doesn’t want her to teach this year. Medya brushes that off.

She said she can’t wait for September when school and her classes start again.

She said every one should be allowed to speak their language.

Turkish law is changing — this year, schools in Turkey have the option of teaching Kurdish language classes, if enough students are interested.

But Medya said she won’t stop teaching until Kurdish is recognized as an official language in Turkey.