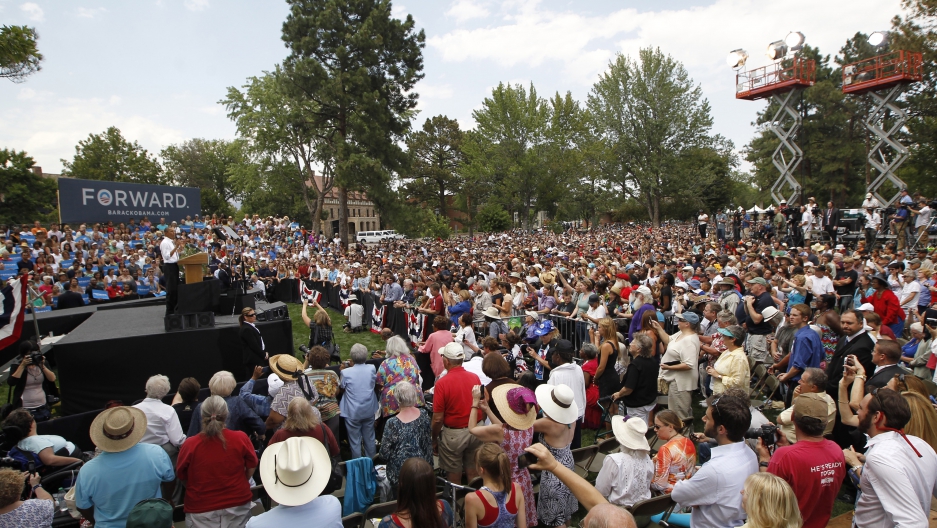 At campaign rallies, like this one for President Barack Obama earlier this month in Colorado Springs, Colo., attendees often hear popular music meant to convey a specific message. (Photo by Jason Reed/Reuters.)

It’s been decades since any political business was hashed out at a national political convention.

They’re stage productions, and music is a big part of the image they’re designed to project. But even at smaller rallies out on the campaign trail, music plays a more mundane but essential role.

“Soundtracks are a way for campaigns to keep people engaged while they’re waiting for the candidate to arrive,” said Anna Sale, a reporter for WNYC’s It’s a Free Country.

The right songs also project “the sense of patriotism or the sense of hope that the campaign is trying to get out there,” she said. Hence the Romney campaign’s reliance on “Born Free” by Kid Rock.

But the choices of music have become more contentious as musicians have easier access to public opinion through social media. After Jackson Browne sued Republican presidential nominee John McCain in 2008 for using “Running on Empty” in a web video, campaigns began seeking permission — not legally necessary — from each artist.

Some balk at even being mentioned: witness Rage Against the Machine lead singer Tom Morello’s recent tirade against his big fan Paul Ryan.

Although musicians tend to support Democrats, President Barack Obama’s campaign is not without its own music problems. He’s no longer the romantic underdog that stars from Wilco to The Boss rallied around in 2008.

“He’s got to woo us back,” Sale said. “He knows there’s an enthusiasm gap. He knows he’s not raising money the way Mitt Romney’s raising money.”

It’s a surprisingly direct message that the Obama campaign’s playlist includes Al Green’s “Let’s Stay Together.” He even sang a couple lines from the song at a fundraiser in Harlem earlier this year.

“Most campaign songs don’t have quite that message,” Sale explains. “The American people are kind of heartbroken after four years of economic downturn, and they need to be convinced ... to stay along.”

One song Sale would love to add to a campaign playlist is “I Believe in America,” by Chris LeDoux. Although the lyrics were written in 1986, they seem particularly timely.

This country's seen some hard times

She's comin' through another depression

And for some it ain't over yet

We've all been divided

Playin' our own selfish games

Why does it always take the hard times

To get people back together again

But I believe in America…