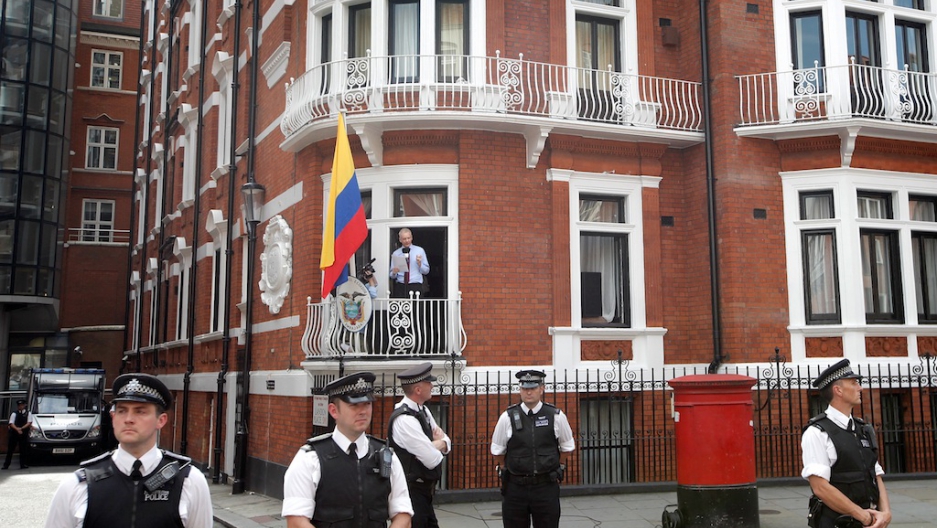 Wikileaks founder Julian Assange speaks from the balcony of the Equador embassy in Knightsbridge on August 19, 2012 in London, England. During his speech, Mr Assange called for the United States to bring an end to its 'Witch Hunt' against Wikileaks staff and supporters. He is currently living inside Ecuador's London embassy after being granted political asylum whilst facing extradition to Sweden to face allegations of sexual assault.
Credit: Rosie Hallam
Share

QUITO, Ecuador — The stalemate between the British and Ecuadorean governments over the fate of WikiLeaks founder Julian Assange appears to be one step closer to breaking this weekend.

Ecuador’s President Rafael Correa announced that he had received confirmation from London that UK authorities had withdrawn a threat to storm the South American country's embassy there, paving the way for negotiations after a tense two weeks.

At the center of the deadlock is Assange, the former computer hacker who through WikiLeaks has released a myriad of top-secret documents, infuriating Washington and many Western governments. Assange is currently holed up in Ecuador’s London embassy, avoiding extradition to Sweden where he is wanted for questioning over sex crime allegations.

The embassy is surrounded by British police who have been ordered to arrest the 41-year-old “under all circumstances” should he leave the refuge of the diplomatic compound.

"We consider this unfortunate incident over, after a grave diplomatic error by the British in which they said they would enter our embassy,” Correa said during a televised address on Saturday, adding that his country had indeed been threatened and “history should not be distorted.”

More from GlobalPost: What do Ecuadoreans think about the Assange case?

Assange has taken refuge in the small embassy in a posh London neighborhood for more than two months. He only revealed himself last Sunday to give a brief but impassioned statement on the balcony in which he said the US must “renounce its witch hunts against WikiLeaks.”

Correa's government granted Assange asylum in Ecuador on Aug. 16, one day after his foreign minister denounced the UK's warning that London police could enter Ecuador's embassy to apprehend the WikiLeaks founder.

On Thursday, British officials delivered a letter to Ecuador withdrawing the threat but have refused to disclose its contents. Correa revealed what was in the letter during his weekly television appearance.

Correa, poised to run for a third term as president next year, appeared to revel in the attention at the outset of the row with the UK. The rhetoric had begun to intensify among the parties interested in the Assange affair.

But now Ecuador seems more concerned about a reasonable outcome.

“I'm a bit skeptical that Britain, Sweden or the United States will change their position, since they are not used to doing so,” Correa told Reuters in an interview last week, adding that the threat was "a monumental diplomatic mistake.”

On Friday, Ecuador’s Foreign Minister Ricardo Patino spoke before the Organization of American States (OAS) in Washington and urged members to back a resolution in Ecuador’s favor. The resolution was signed by 32 of the 34 members. The United States added a footnote indicating that it did not adhere to a point which specifically expressed support for Ecuador. Canada, as a member of the Commonwealth, did not sign the document, in a move that the Correa administration lamented.

Many analysts have seen the British response as shortsighted. They say it has allowed Ecuadorean authorities and their Latin American allies, including Venezuelan President  Hugo Chavez, to quickly bring up the specter of British colonialism that haunts its image across the region. Notably, in recent months, the UK has traded barbs with Argentina over the Falklands, known here as Las Malvinas.

“We're not a British colony,” said Patino angrily last week. “The colonial times are over.”

Both Patino and Correa have brought up the case of former Chilean dictator Augusto Pinochet. Britain failed to extradite him in 2000, saying that he was unfit to stand trial for alleged torture and murder during his 1973-1990 rule of Chile.

Much of Latin America has backed Ecuador. As well as the OAS, the Union of South American Nations (UNASUR) and Chavez's Bolivarian Alternative for the Peoples of Our America (ALBA) offered their support over the week.

Chavez has remained uncharacteristically quiet on the subject, although he did warn that Britain would face “grave consequences” should the government storm the embassy. Argentine officials said that the threat “shows the arrogance of British diplomacy,” adding that it “doesn’t come as a surprise.”

British authorities say they must extradite Assange to Sweden. Assange denies the Swedish accusations of sexual assault and rape, claiming that they are just a mechanism for his eventual extradition to the US to face charges over WikiLeaks' 2010 publication of secret US cables. A US State Department official has said these are "wild assertions."

The openly anti-American Correa shares Assange’s concerns, and so offered him diplomatic asylum last week. However, sources across the US and Europe’s governments say the US has issued no criminal charges against Assange and has launched no attempt to extradite him, reports Reuters.

Thanks to Assange and the political machinations around his case, Ecuador has been thrust into the international spotlight in recent days. Correa appears tired of the subject, keen to get on and govern the country.

However, on Sunday, marches are taking place across Quito and the issue is not likely to fall from the front pages soon — as long as Assange remains in the country's embassy in London.

With the UK not allowing safe passage to Ecuador, however, careful diplomacy appears the only way out for either nation and for the man seen by some as a freedom-fighting hero and by others as a mere egomaniac, refusing to answer for his alleged crimes.