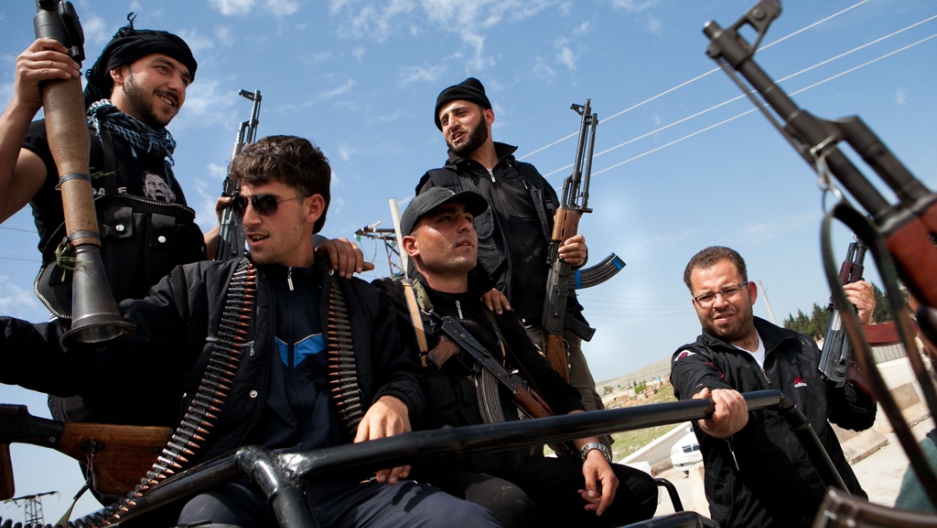 Syrian fighters hold their weapons at a checkpoint controlled by the Free Syrian Army in the northwestern province of Idlib, on April 15, 2012.
Share

Assad's regime has been accused of massacring at least 200 civilians in the town of Daraya, which forces recently recaptured from rebel forces.

The Local Co-ordination Committees (LCC) reported that at least 200 bodies, including some women and children, where found in houses and basements around the working-class Sunni town, Reuters reported.

"In the last hour, 122 bodies were discovered and it appears that two dozen died from sniper fire and the rest were summarily executed by gunshots from close range," Abu Kinan, an activist based in Daraya, told Reuters. "Assad's army has committed a massacre in Daraya."

However, government officials claimed the attacks were part of an anti-terrorism effort, the Guardian reported.

Activists say that the Daraya killings were the regime's attempt to stifle the rebellion against Assad "once and for all," after rebel fighters regrouped after an army offensive in Damascus last month, the Hindustan Times reported.

The Daraya attacks could bring the death toll for Saturday to over 400 casualties, making it one of the bloodiest days of the Syrian uprising, the UK Press Association reported.

"I am deeply concerned by emerging reports of a brutal massacre of civilians in Daraya, in the outskirts of Damascus," UK Foreign Office minister Alistair Burt said Sunday. "If confirmed it would be an atrocity on a new scale, requiring unequivocal condemnation from the entire international community."

According to activists in the region, over 20,000 people have died in the past 17 months of violence in the region, which began as protests against Assad's regime and have since turned into full-fledged civil war, the Associated Press reported.