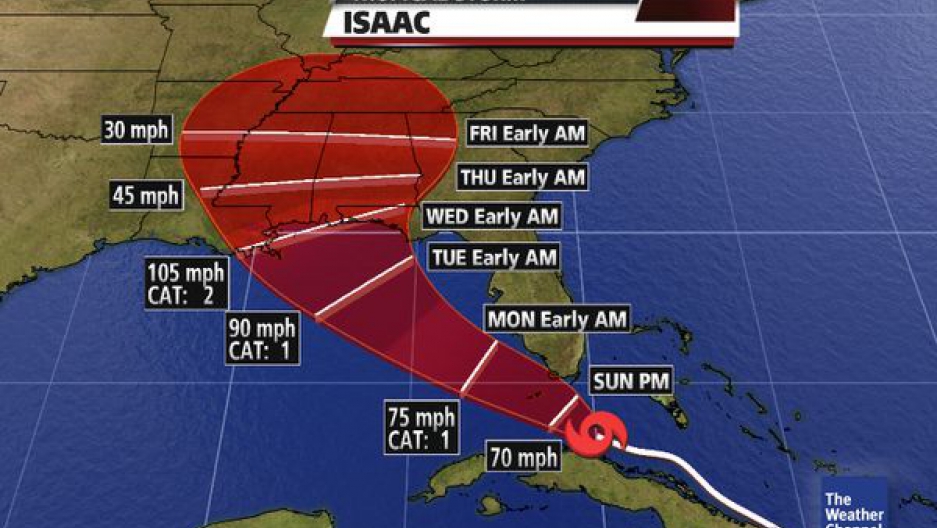 Tropical Storm Isaac is headed toward the Florida Keys Saturday, but is gathering strength for a potential landfall in the northern Gulf Coast later this week.
Credit: The Weather Channel
Share

Orlando, FLA -- Republican Party officials have canceled the opening day of their national convention, citing concern over the strength of Tropical Storm Isaac as it heads toward Tampa on Florida's West Coast.

Priebus, in a conference call to reporters, said the convention will start on Tuesday. “The Republican National Convention will take place and officially nominate Mitt Romney and Paul Ryan, and the party has other necessary business it must address,” said Priebus. “We also are remaining in constant contact with state and federal officials and may make additional schedule alterations as needed.”

It's the second time the roll call to nominate Romney has been moved. It was originally scheduled for later in the week but officials moved it up to Monday over fears about the storm, as well as concerns that unruly Ron Paul supporters might disrupt the roll call. Television networks had decided not to broadcast coverage of the convention on Monday.

NBC News reports that a scheduled trip for Vice President Joe Biden Obama to Tampa would officially be canceled.

Florida Governor Rick Scott declared a state of emergency on Saturday and canceled his plans to participate in the opening day of the convention to focus on the state's preparations for the approaching storm, according to Reuters.

Russ Schriefer, a top Romney campaign aide, dismissed concerns that the delay would hamper GOP efforts to get their message out to the important swing state of Florida.

"We will absolutely be able to get our message out," he told the Wall Street Journal. "Even though we were planning to do it in four days, we absolutely think we can do it in three."