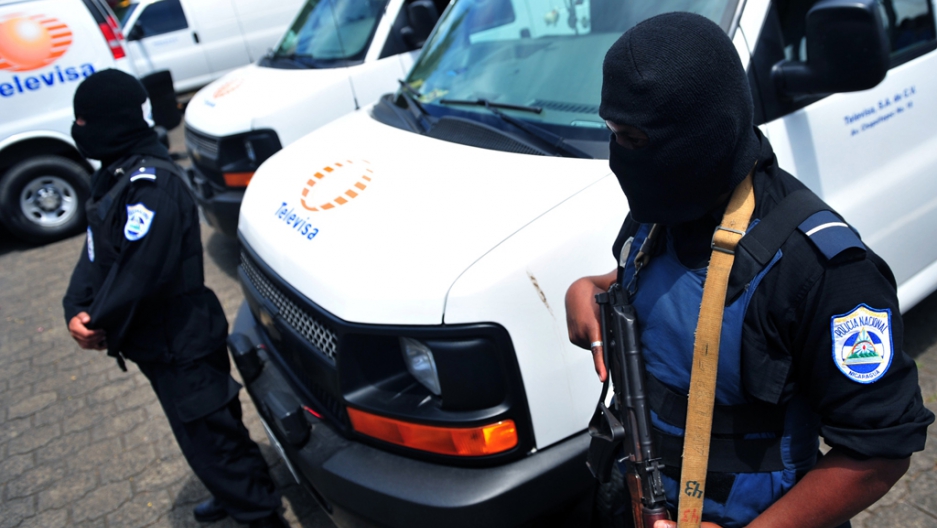 Nicaraguan National Police members stand guard in front of seized vans on August 24, 2012 in Managua, following the arrest of 18 foreigners on August 21, while trying to enter the country as journalists of Mexico's Televisa. Mexico's embassy in Nicaragua had already issued a report stating that Televisa denied the men were part of their firm, and that they carry on with the investigation to confirm the nationality of the detainees. Seven million USD were found inside the vans --in "caletas" (a space specially designed and constructed to hide money). AFP PHOTO/Hector RETAMAL
Credit: HECTOR RETAMAL
Share

Police in Nicaragua say they have arrested 18 people posing as journalists who were carrying at least $7 million in cash, reports BBC News.

They were trying to cross the border from Hondouras in six news vans painted with the logos of Mexico's Televisa network. Voice of America reports that police chief Aminta Granera said the money was found in three of the vans.

The Associated Press reports that the "fake journalists" said they were traveling to Nicaragua to cover the trial high-profile of trial of suspects in the killing of Argentine folk singer Facundo Cabral last year.

Instead, Granera told AP the group intended to smuggle the money south to Costa Rica. The Mexican embassy in Managua confirmed to the BBC that some of the 18 suspects are Mexican citizens.

Mexico has seen increasing violence in the past several weeks after a period calm following the Presidential election on July 1. More than 50,000 people have been murdered in drug related killings in Mexico since President Felipe Calderon took office in 2006.