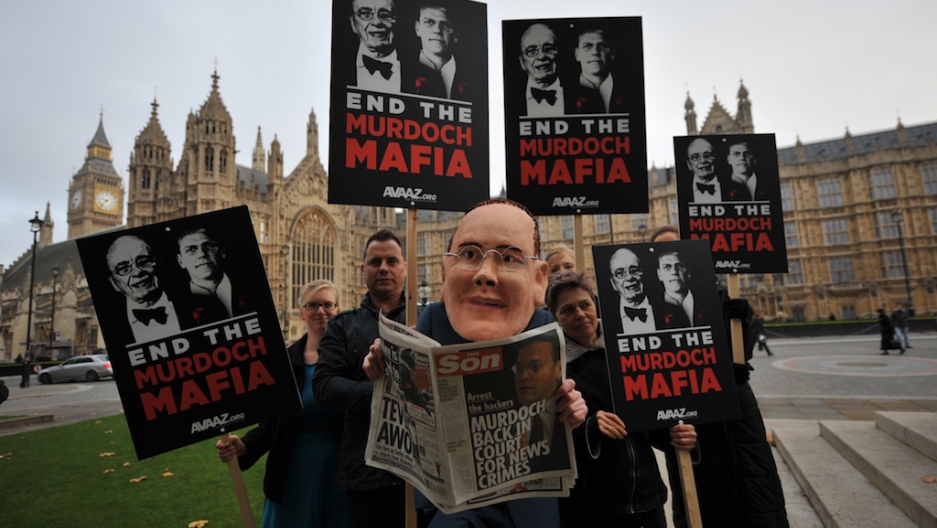 A protester (C) wearing a mask of News International chairman James Murdoch, the son of News Corp. boss Rupert Murdoch, poses with a mock-up of a newspaper 'the Son' with other placard bearing protesters outside the houses of parliament where Murdoch was to give evidence in the on-going media phone hacking scandal in London on November 10, 2011.
Credit: Ben Stansall
Share

Rupert Murdoch-owned British newspaper involved in privacy fight with celebrity? Check. The celebrity is Prince Harry, caught naked in Vegas by one of the group of women he invited to his suite for a party. Murdoch's Sun newspaper was the first British paper to publish them despite reported threats of lawsuits from Buckingham Palace.

It's a little over a year since the phone-hacking story exploded, threatening the global Murdoch empire. The News of the World, the main paper associated with the scandal was shut down, the Leveson Inquiry into the nexus of the press, politics, and police at the top of British official life was convened. And yet...

Thursday night the heaviest hitters in British media assembled in Edinburgh, Scotland to listen to Elisabeth Murdoch deliver the annual MacTaggart Lecture. The MacTaggart is a kind of State of the Union address for the media business, its importance is measured by the amount of coverage on the front pages of quality newspapers.

It is also something of a Murdoch family tradition. Patriarch Rupert delivered the lecture in 1989. Exactly 20 years later son James did it, and now his big sister got her turn.

As a measure of how little and how much has changed in the last year, Elisabeth M's speech was instructive.

In his 2009 speech, brother James described the BBC, the Murdoch's main TV competitor in Britain, as Orwellian. It's guaranteed annual income via a special tax called the license fee had a chilling effect on competition. He concluded with a statement straight out of the Mitt Romney/Paul Ryan playbook:

"The only reliable and perpetual guarantor of independence is profit."

His sister begs to differ, "We need to learn how to be comfortable with articulating purpose and reject the idea that money is the only effective measure of all things or that the free market is the only sorting mechanism," Elisabeth Murdoch told the assembled honchos before adding, "Profit must be our servant, not our master."

Now before you go thinking that she is the family liberal, remember Ms. Murdoch runs a highly profitable independent production company called Shine, which she started in 2001 and sold last year to her father's News Corp for a little north of $600 million. Her reported cut of the deal is $214 million. This prompted a small shareholder revolt over nepotism at the top of News Corp.

Anyway, she is taking full advantage of the spindown spotlight to garner a little positive publicity and sympathy telling the Daily Telegraph: “It has been a nightmare year for the family,” she said. “To know that every single day for a period of time, there were pages and pages of coverage, and for staff to have to walk into meetings [and be quizzed about the hacking]... I think the damage from the last year—it has been a very big deal. It has been damaging and that will take time to recover."

Although, not every one is as sympathetic. Guardian columnist Deborah Orr's take ran under the headline, "The Best of Them but Still One of Them."

While things haven't been so bad for the Murdoch's post phone-hacking, it hasn't been so great for their loyal retainers. News International's former chief executive Rebekah Brooks was formally charged with phone-hacking this month. This charge goes along with the charge of "perverting the course of justice" i.e. "obstruction of justice." She faces the very real prospect of jail time if convicted.

So far Brooks, once described as Rupert Murdoch's other daughter, is maintaining an omerta-like silence about the situation.

There are another seven NoW employees charged with illegal phone-hacking activities.

The British press as a whole is also a loser. The papers' editors and publishers have endured a year of public spanking at the Leveson Inquiry and there is no doubt that the tabloid end of the industry is treading much more carefully where privacy is concerned.

The fact that the Prince Harry nude photos were all over the web for days before anyone of the British tabs dared to publish them is proof of that. The fact that it was the Sun that finally broke the self-imposed embargo—and that the Palace after all its threats has said it will take no action—shows that the Murdoch press is still more daring in pushing the boundaries than any other British newspaper publisher. (BTW, E Murdoch said it was a good idea that the Sun had published).

But in many ways, at the top, not much has changed. The Murdoch family still makes money, lots of it, in Britain. British Prime Minister David Cameron, whose friendship with both Brooks and Coulson had the potential to undermine his leadership, seems to have survived the fall-out of the scandal. Cameron's ratings are down, but that's because Britain has entered a double-dip recession, and the right-wing press has decided he isn't right-wing enough. The Olympics helped his main rival within the Conservative Party, London Mayor Boris Johnson, more than it helped him.

Everything may boil up again when Lord Leveson releases his report, but there is no date set for that.

Maybe it will come out next August—Groundhog month.