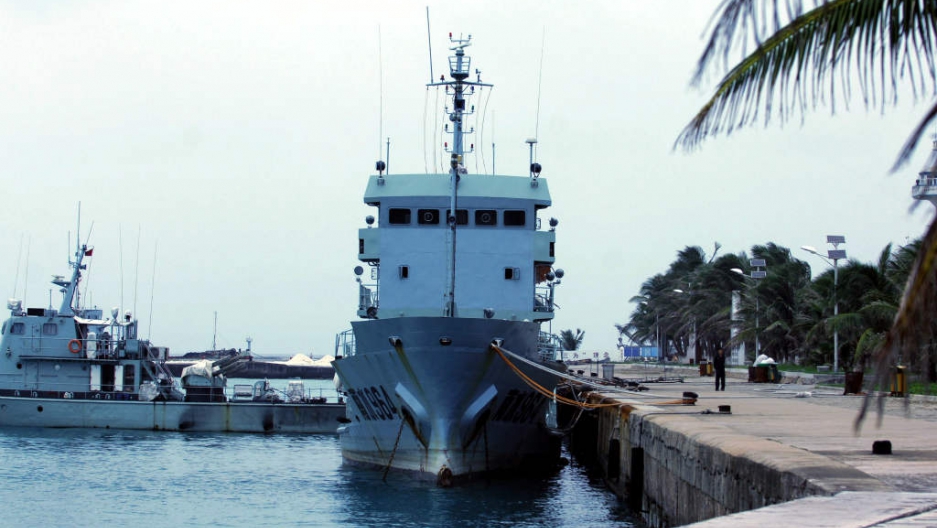 Chinese boats patrol the Paracel chain, part of the disputed territory in the South China Sea. China established a new military garrison this July to protect the island, but their claim has no basis in international accords.
Credit: STR
Share

PARIS, France — A recent article, "China’s South China Sea jurisdictional claims: when politics and law collide," published in the East Asia Forum, remarked that the uncertainty and insecurity generated by China’s claims in the South China Sea are reflected in headlines throughout Southeast Asia, even though the claims have no solid legal basis in international law.

The insecurity is a consequence of tension in the region and in international relations rising from China’s newly aggressive posture in the South China Sea. The claims are based on a so-called “9-dashed line” map, adapted by the Zhou Enlai government when it took control of China in 1949. It is taken from the original map, known as the “11-dashed line” that was drawn by Chiang Kai-shek’s nationalist government in 1947, a time when the islands of the South China Sea, once said to be a Japanese lake, were being returned to the countries that had possessed them before World War II.

The fundamental difference in the maps is that the Nationalist China map includes the Gulf of Tonkin, the Communist China map does not. The dashes on the maps refer to the demarcation lines used by China for its claim of the South China Sea area that includes the Paracels Island and the Spratly Islands. China occupies the Paracels, which are closest to China and Vietnam, but Vietnam and Taiwan are claiming them. Claims on some or all of the Spratly Islands, which are nearest Indonesia and the Philippines, are being made by the Philippines, China, Brunei, Malaysia, Taiwan and Vietnam. The Spratlys are believed to contain important mineral resources, including oil.

The confusion over the legality of claims to the territories begins with the San Francisco Peace Treaty, signed in 1951, that officially ended World War II and Japan’s position as an imperial power. Neither China nor Taiwan were present because countries attending the peace conference could not agree which was the legitimate government of China. The treaty, as signed by the parties, did not specify which countries could legally possess the former Japanese territories in the South China Sea.

Taiwan and China each wanted Japan to return the islands of Paracels and Spratlys to them. This resulted in Taiwan’s version, the "11-dashed line" map, and Communist China’s adaptation that became the “9-dashed line.” The 1952 Treaty of Taipei between Japan and the Republic of China, newly established on the island now known as Taiwan, did not assign possession of Paracels and Spratlys. Communist China unilaterally claimed the right to have the islands.

Thus, the current claims of both China and Taiwan have no basis in international accords and, in effect, are illegal. China is inconsistent in attempting to de-recognize Japan’s World War II territorial claims in the South China Sea while using those claims to assert its sovereignty on former Japanese territories.

Internationally, the political and legal status of Taiwan remains a contentious issue. Consequently, China’s claims to the territories, based on Taiwan’s sovereignty, are among many unresolved issues between the two countries.

Disputes on the sovereignty over the Paracels and Spratlys in the South China Sea existed before the World War II. All unilateral or bilateral agreements or claims on multilateral disputes are invalid.

More from GlobalPost: What sould the US do in the South China Sea?

The United Nations Law of the Sea Convention that concluded in 1982 defines the rights and responsibilities of nations in their use of the world's oceans. Among its provisions are rules for establishing territorial limits and providing means for settling disputes over coastal claims. All of the countries boarding the South China Sea, except North Korea, are among the 162 nations to ratify the treaty. The U.S. Senate has not ratified the treaty.

Under international law, the current crisis should be presented to the Law of the Sea Convention to settle the Chinese challenge to Vietnam, the Philippines and others over claims to more than 40 islands in the South China Sea.

Also in May 2009, China submitted for the first time its “9-dashed line” map attached to a Note Verbale to Secretary-General of the United Nation seeking to refute the claims of Vietnam and Malaysia and to clarify its claims. Although the claim in China’s map was unclear, its submission was considered a major milestone in the South China Sea disputes.

Because that was the first time the international community knew officially of the Chinese claims designated on the map, Vietnam immediately sent a diplomatic note to the Secretary-General to refute China’s claims. These submissions did not identify clearly the disputed areas, but they are legal and valuable documents for the settlement procedure.

Philippines, a leading voice in the resolution of South China Sea issues, has recently proposed a solution based on a Zone of Peace, Freedom, Friendship and Cooperation. It requires a clear delimitation of disputed and undisputed areas in accordance with the UN Convention on the Law of the Sea before peacefully pursuing joint development as outlined in China’s proposal.

The Philippine proposal segregates the undisputed areas from disputed ones. Vietnam supports the Zone of Peace, Freedom, Friendship and Cooperation while China has rejected it and pressed others Association of South East Asian Nations not to participate in discussions about it.

Not surprisingly, since China has never made clear its claims by using the so-called “9-dashed line” covering virtually more than 90 percent of the South China Sea, this rule-based concept breaks through the imprecision of China’s approach. China’s assertive posture has raised concerns among the international community about the potential for conflict in the South China Sea area. Beijing’s steps in the South China Sea are more determined and aggressive than ever, creating the worrisome prospect of escalating tension in the area. The first step toward settling these disputes through peaceful negotiations based on international law would be for all to claimants to state their claims with clarity.

More from GlobalPost: Why all the fuss in the South China Sea?