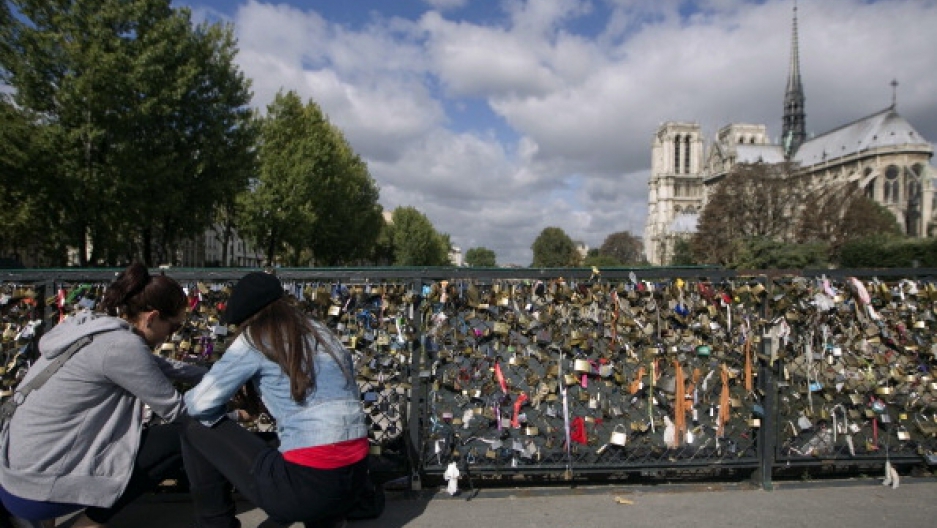 Two girls attach a padlock on a fence of the Pont de l'Archeveché bridge behind Notre-Dame (Our Lady) cathedral in Paris, on September 13, 2011. Lovers often throw the key into the river Seine as a sign of undying love, or keep it and open the padlock when they next return to the French capital.
Credit: JOEL SAGET
Share

The last time I was in Paris, I wondered why so many locks were attached to bridges and railings.

I have seen similar locks in Prague and in Budapest, but that’s nothing compared to Paris. Some Parisian bridges are completely covered with them.

I always assumed people put locks on bridges to symbolize that the place has made a profound impact on them and that a part of their heart will always be in Paris, Prague, Budapest, Taiwan, or wherever.

This week, I became padlock-enlightened when I read this piece in The New York Times. The padlocks, apparently, are symbols of the visiting couples’ everlasting love.

“Once discreet, doing their deed at night, visitors soon acted in broad daylight, in pairs, photographing each other in front of their locks, and videotaping the throwing of the keys into the Seine…..For couples visiting from all over the world, these locks were symbols of their everlasting love. Indeed, in other cities the locks have also caught on as an expression of passion — in Seoul, Budapest, Rome and Tokyo. Living in one of the world’s most visited cities, with 27 million visitors a year, and supposedly the world’s capital of romance, Parisians should have guessed from the beginning that this strange ritual had to do with the fantasy of everlasting love.”

Locks and love? That one, I must admit, I never saw coming. Locks and lust, I can see. But what do locks have to do with love?

By the sounds of things, this is the question Parisians are asking, as well.

Instead of sharing the world’s — however banal — celebration of everlasting love, Parisians are apparently getting increasingly irritated by people’s misunderstanding what true love means.

Poirier writes that behind love — at least love French-style — lies the idea of freedom, not commitment:

“To love truly is to want the other free, and this includes the freedom to walk away. Love is not about possession or property. Love is no prison where two people are each other’s slaves. Love is not a commodity, either. Love is not capitalist, it is revolutionary. If anything, true love shows you the way to selflessness….There is no safe, everlasting love. The idea that you can lock two people’s love once and for all, and toss the key, is a puerile fantasy.“

Love — the very love that gave the City of Love its name — is apparently inherently hazardous, always on the brink of failure and above all vulnerable.

According to Poirier the key is to embrace its fragility, wish your beloved to be free and you might just, only just, have a chance to retain his or her undying gratitude, and love.

“But don’t ever dream of locks and throwing keys overboard, especially not in Paris,” she warns.

In other words, don’t weigh down the beauty of those bridges with those ugly, metal padlocks.

Paris, after all, is beautiful because it’s the City of Love, not the City of Commitment.