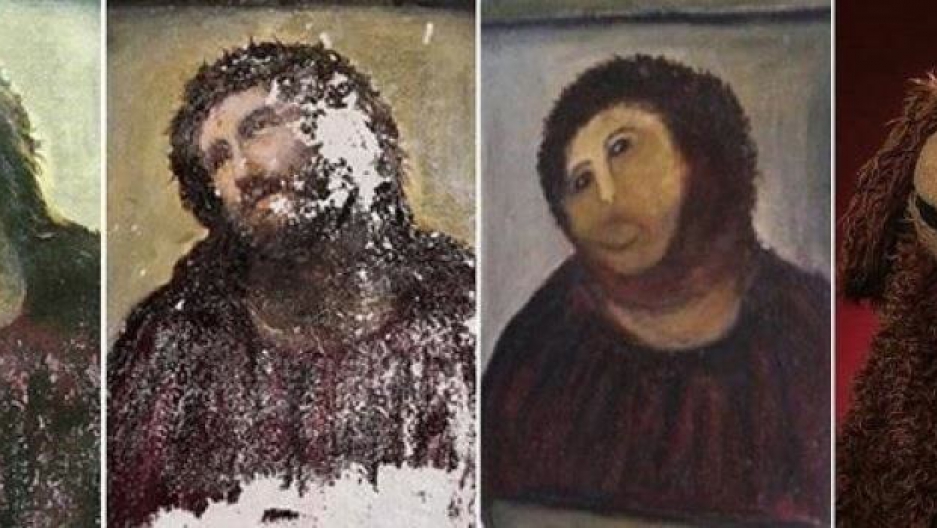 All Cecilia Gimenez wanted to do was restore a painting back to its original glory.

But instead, Gimenez has become the poster woman for good intentions gone bad.

Earlier this week GlobalPost reported on Gimenez, who attempted to restore the 120-year-old Spanish fresco titled “Ecce Homo” by painter Elias Garcia Martinez. The result, however, was a botched job that the Huffington Post referred to as "Beast Jesus."

The painting was donated to the Centro de Estudios Borjanos in Borja, Spain, by the painter's granddaughter, according to the Telegraph. The centro reportedly holds an extensive archive of regional religious paintings.

But Gimenez says the restoration isn't entirely her fault. She told the Spanish TV station RTVE, according to reports, “We’ve always repaired everything here. Of course, it was the priest” who asked her to touch up the portrait of Jesus Christ that hung in the Santuario de Misericordia, in the small town of Borjas. "Of course the priest knew it,” she said.

The poor woman is now bed ridden with anxiety over her mistake and the attention it has garnered, NPR reported, citing a report by Spanish news wire EFE.

But a few vocal defenders are coming to her rescue, claiming that Gimenez's creative destruction is art in its own right. Not to mention, points out the Guardian's Jonathan Jones, Ecce Homo was never a "masterpiece" to begin with.

AFP reports that fans launched an online Change.org petition to save the painting in its current form, which AFP described as looking "like a pale monkey's face surrounded by fur, with mishapen eyes and nose, and a crooked smudge for a mouth, a style some wits have compared to Picasso's."

According to AFP, the petition, signed by more than 12,000 people, claims the restoration "reveals a subtle criticism of the Church's creationist theories while questioning a resurgence of new idols."

Of course, meaning, like beauty, is in the eye of the beholder.

Which painting do you prefer? Let us know in the comments below.