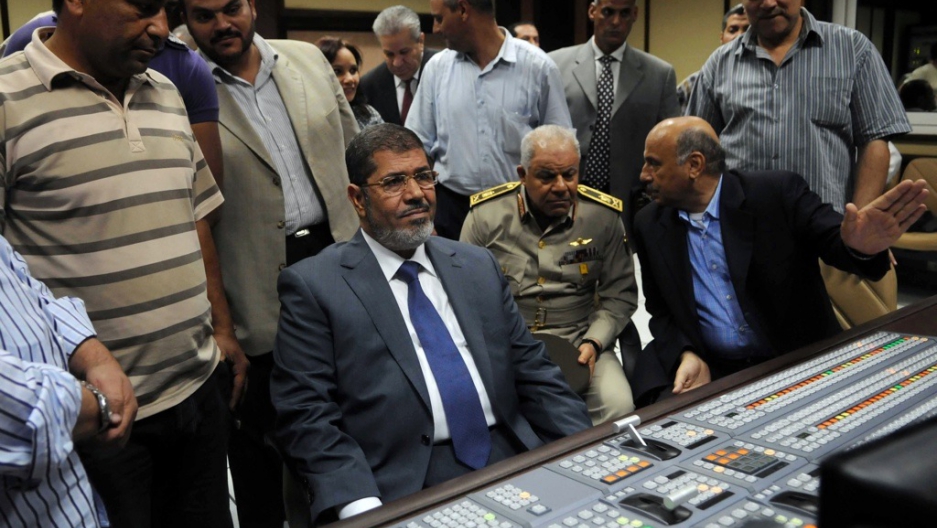 A court remanded the editor-in-chief of a local newspaper Thursday on charges of “insulting the president” in a move Egyptian journalists say is pitting Morsi’s government against Egypt’s free press in a way that is reminiscent of the authoritarian regime protesters ousted last year.

Late Thursday, Morsi issued a law that protects journalists from temporary detention while they await trial. But the charges still stand.

Egypt’s state prosecutor had summoned Islam Afifi, the chief editor of Al Dostour, over a controversial front-page editorial on Aug. 9, in which the paper told readers the nation would see bloodshed and strife if the Muslim Brotherhood, an organization of which Morsi was once a leading member, stayed in power.

Morsi may have had a legal basis to take action against the publication that media analysts say called for an army-led coup against an elected president, a crime punishable by up to five years under Egypt’s penal code.

But Morsi’s swift move to crack down on dissent, however incendiary, also comes on the heels of a series of separate but similar government actions critics say shows a clear plan by the Brotherhood to consolidate control over the media.

Earlier this month, a court order took Egypt’s Al Faraeen satellite channel off the air after its owner and firebrand television personality, Tawfik Okasha, blamed the Brotherhood for a militant attack in Egypt’s Sinai Peninsula that killed 16 soldiers. He will appear in court on Sep. 1.

Also in August, the Brotherhood-led upper house of parliament, the Shura Council, appointed several Brotherhood loyalists as chiefs of the state-run media outlets.

“This is like Saudi Arabia,” said a journalist at Al Dostour, Mohamed Abdel Salama. “It is a bad sign that after revolution, these acts are still happening. They [the Brotherhood] are trying to shut up the opposition.”

When hundreds of thousands of Egyptians rallied in Cairo’s now-famed Tahrir Square to topple Mubarak and his cronies in the name of freedom in 2011, they hoped any new government would be anchored in the principles of democracy and civil liberty.

A smattering of new and lively publications and satellite channels have flourished in the post-Mubarak era, where reporters have gone so far as to openly criticize Egypt’s armed forces, once an untouchable institution.

Many had expected Morsi, elected in June, to respect the media in a way Mubarak, who presided over a security apparatus that threatened and intimidated journalists, did not.

Under Mubarak, Al Dostour’s former editor-in-chief, Ibrahim Eissa, was also charged with and imprisoned for “insulting the president.” It is those echoes of Mubarak-style tactics against Egypt’s press corps that are worrying journalists and free speech advocates.

“I am quite alarmed by the number of lawsuits that have suddenly appeared against journalists for ‘insulting the president,’” said Rasha Abdullah, media expert at the American University in Cairo. “This has always been a problem under Mubarak, what is happening now far exceeds what happened in the Mubarak era.”

For all his flaws, Morsi is working within the law, according to some analysts. And, with the Brotherhood dominating the Shura Council, he has the right to appoint media chiefs under existing provisions.

The tradition of government control over a handful of state-owned outlets dates back to the era of Egyptian President Gamal Abdel Nasser, who seized control in a military coup in 1952.

He saw the nationalization of local media as a key strategy for maintaining authority and political support. The state media regime persisted under President Anwar Sadat, and later President Hosni Mubarak.

“The [Morsi] government appears to have had legal grounds to confiscate copies of al-Dustour,” writes Shadi Hamid, director of research at the Brookings Institution, in The Atlantic, using an alternative spelling of Al Dostour.

“Should Egyptians (or anyone else) be able to call, however peacefully, for the army to depose an elected president?” he wrote.

“The laws regulating press freedom in Egypt need to change to begin with,” she said. “You cannot have the prospect of putting a journalist in prison for what he or she said. It's unacceptable.”

More from GlobalPost: Could Morsi make peace in the Middle East?

Aliaa Hamed, a civil society reporter at the privately-owned Al Shorouk newspaper, says she believes Tawfik Okasha, the virulently anti-Brotherhood television personality, should be put on trial for calling for Morsi’s blood — but that his channel should remain on the air.

She says journalists should be wary of Morsi’s new measures to stifle dissent — but is buoyed by the vocal, vibrant nature of Egypt’s press corps.

“I think the fact that you have different kinds of media [in Egypt], with different ways of thinking, will make it harder for Morsi or the Muslim Brotherhood to oppress the media,” Hamed said.

“It’s not like it was before the revolution, where we were afraid of speaking,” she said. “Now, we know our voice has power.”