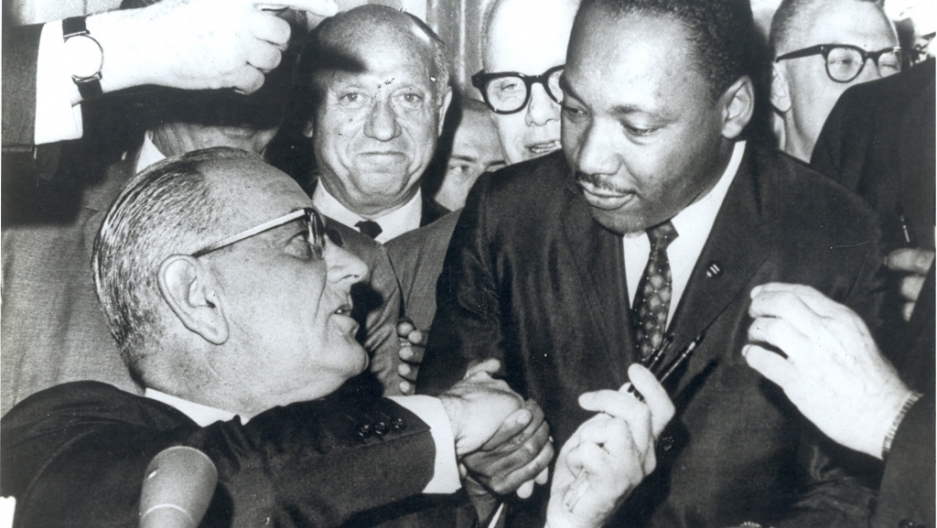 President Lyndon Johnson shakes hands with the Reverend Martin Luther King, Jr., after handing him one of the pens used in signing the Civil Rights Act of July 2, 1964 at the White House in Washington.

In the late 1950s, as African nations were seeking and gaining independence from their colonial masters, civil rights leaders in the US were watching.

In fact, many of them even traveled to countries in West Africa to see for themselves, and get inspiration for their own movements. Dr. Martin Luther King Jr. was one of those leaders, and tape from an interview talking about his 1957 trip to Ghana and Nigeria has just resurfaced.

The tape is unique because his trip to Africa which was not widely documented.

Raymond Windbush, the director of the Institute for Urban Research at Morgan State University in Baltimore, says the remarkable thing to him is that Dr. King was in Nigeria because he was invited to the inaguaration of the first Nigerian head of state. This means that he already had contact with African leaders, and was already making connections between their fight and his.

Also, Windbush says, it's incredible that Dr. King was only 31 years old at the time of the interview.

"I was thinking about what I was doing at 31," he says. "It's a remarkable vision for a young man to see his struggle as being linked with other countries, and specifically of the African continent."

The conversation turns to Dr. King's trip to Africa about three minutes in.

Note: This story has been updated to include the audio from the interview and more context from our interview with Raymond Windbush.