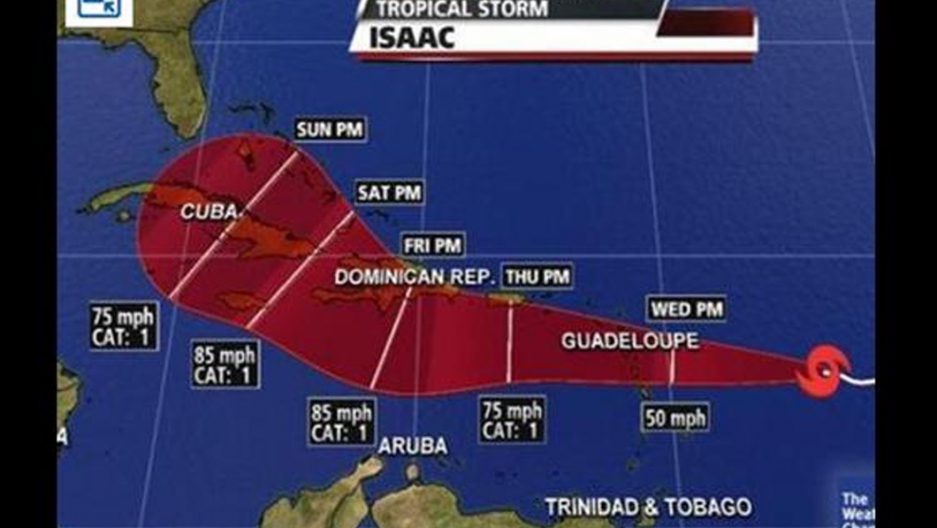 Tropical Storm Isaac on a projected path to Florida. The storm is expected to become a hurricane by Thursday.
Share

More than 50,000 people will be gathering in Tampa starting Monday for the GOP convention, which is expected to officially nominate Mitt Romney as the Republican candidate for president.

The US National Hurricane Center on Wednesday said Isaac was expected to strengthen into a hurricane by Thursday, with maximum winds of at least 74 mph.

Jeff Masters, director of meteorology at Weatherunderground.com, told the Associated Press that the computer models showing the storm hitting Florida's west coast could easily change in the next five days. Masters said long-range predictors are often inaccurate but that the climate situation has made it more likely that Tampa could be a target for the storm.

‘‘It would take a perfect storm of a scenario where a bunch of factors all conspire together,’’ Masters told the AP. ‘‘But we definitely have to watch this one.’’

Convention organizers said they were aware Florida is a potential target for hurricanes, especially during the high season of August and September.

In fact, those planning the convention have been considering the scenario for months. The AP reports that organizers held a four-day mock hurricane drill in May featuring a fictional Category 3 storm striking the Tampa area during the second day of the convention. If faced with a major storm, meaning winds of at least 111 mph, convention organizers said they would cancel.

‘‘At this point, we’re prepared for everything,’’ said Tampa Police Chief Jane Castor told the AP on Tuesday. ‘‘We've certainly factored that into our plans.’’

Florida is a common target for tropical storms but has not had a major hurricane since Wilma in 2005, reports Florida Today.