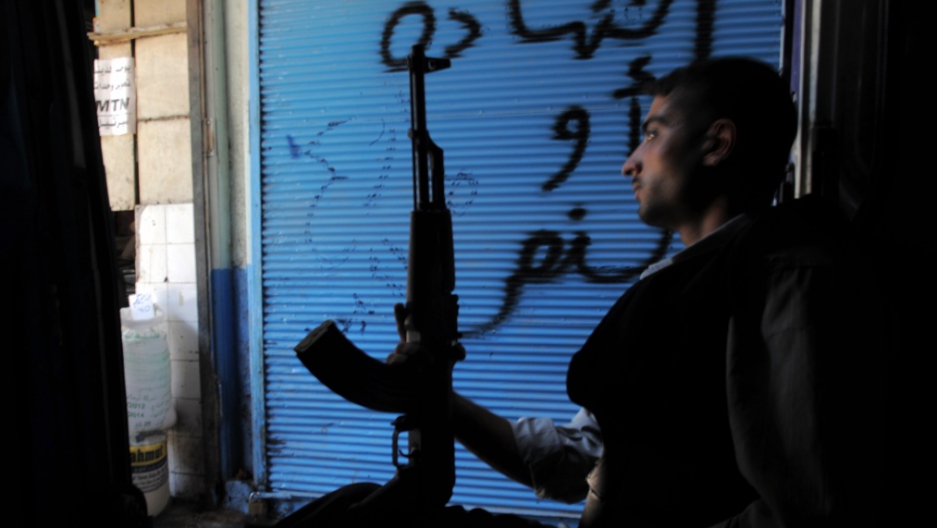 A rebel sits in a van as he checks the area in the northern Syrian city of Aleppo on Aug. 19, 2012. Militants sympathetic to Al Qaeda are a growing presence in Aleppo.
Credit: Bulent Kilic
Share

ALEPPO, Syria — Syrian and foreign fighters sympathetic to Al Qaeda are muscling their way into the Syrian conflict, analysts and Syrian rebels say.

While they share homegrown rebels’ goal of bringing down the regime of President Bashar al-Assad, they operate independently and are nudging the revolution toward a struggle for an Islamic state.

As the battle rages in its 18th month, a group that calls itself Jabhat al-Nusra and has links to Al Qaeda, though denies being a part of the transnational terrorist group, appears to be gaining in strength and numbers.

GlobalPost confirmed a significant presence of Jabhat al-Nusra militants in Aleppo, Syria’s second-largest city and the scene of the latest regime offensive against rebel forces. A group of fighters in the key neighborhood of Salahadin, for instance, openly operated under the group’s banner. However, rebels quickly ushered away journalists attempting to interview them.

Days later, the group paraded into recently won rebel territory in the adjacent neighborhood of Saif al-Dawla waving the flags of the Islamic caliphate from a caravan of trucks.

Tarik, a Syrian rebel fighter who has adopted a militant dogma, told GlobalPost from the frontlines in Aleppo that there were many more men like him who were now fighting not for the original aim of the uprising — to oust Syrian President Bashar al-Assad and establish a more democratic state — but to establish an Islamic government.

Analysts agree. “The longer the conflict goes on, the larger the jihadi presence will get, as more individuals who fought in other conflicts, and have connections to get weapons and funding come,” said Aaron Zelin, an analyst at the Washington Institute for Near East Policy, an American think tank. “Fighting jihad gives individuals more of a cause, as in they’re doing God’s work, and provides a frame for all the trauma and odds against them.”

The trend raises questions about the fate of Syria’s multi-sectarian populace in the event that Assad falls. Will they be persecuted, or will Sunni Al Qaeda militants turn their weapons on Alawites, Shiites and Christians?

"We will give minorities their rights because our prophet gave them those rights," Tarik told GlobalPost. He wore a black ski mask to conceal his identity.

Other Syrians are not so sure.

Jabhat al-Nusra was unknown until it burst onto the scene in January, claiming responsibility for a handful of spectacular bomb attacks in cities across Syria.

“They are always on the front and don’t leave,” said Abu Ahmed, a Syrian activist from Salahadin, a key neighborhood on the frontlines of Aleppo.

Militants aligned with Al Qaeda have been trickling over the border of Iraq and Lebanon for more than a year. But they have recently grown in prominence, complicating debates in the West about whether or not, and how, to intervene in the conflict.

The US government worries that if it were to arm the rebels to help hasten Assad's fall, those weapons could end up in Al Qaeda's hands. The United States once armed rebel fighters in Afghanistan to fight the occupation of the Soviet Union. Those fighters, and their weapons, then went on to fill the ranks of Al Qaeda — a situation the Obama administration hopes not to repeat.

The militants’ presence has also helped legitimized the claims of Assad, who has argued from the beginning that the uprising was a foreign conspiracy to bring down his government. He regularly blamed “foreign terrorists” for instigating the peaceful, pro-reform protests in the early days of the revolt.

It seems to have become a self-fulfilling prophecy.

After its coming out party in January, Jabhat al-Nusra ramped up its attacks on the regime in April and May, Zelin said, suggesting they had gained more recruits and weapons. He said they appeared to be using the same Syrian networks that once smuggled militants through Syria into Iraq to fight the US occupation.

True to Al Qaeda's form, the group’s most effective weapon in Syria so far has been the car bomb.

“For the sake of Homs, we will kill ourselves to avenge the deaths of Muslims,” a man claiming to be a suicide bomber affiliated with Jabhat al-Nusra said in a video posted to YouTube on May 22. A van apparently full of explosives is shown in the video.

In June, Iraqi Foreign Minister Hoshyar Zebari told the Associated Press that members of Al Qaeda in Iraq had been joining al-Nusra. The group’s videos are posted to a prominent Al Qaeda forum, which “shows some level of coordination,” Zelin said.

The militant group has also claimed to execute 13 regime prisoners in Deir al-Zour on May 29 and the beheading of a pro-Assad TV presenter on Aug. 4.

Abu Sayed, a Syrian rebel fighter from Aleppo, played a mobile phone video that showed alleged members of Jabhat al-Nusra executing, and then setting on fire, three Syrian mercenaries who had been fighting on behalf of Assad.

“This isn’t how Muslims should act,” he said disapprovingly.

More from GlobalPost: Holidays in Syria

There is concern among Human Rights groups that the influence of such militants is beginning to show within the ranks of the Free Syrian Army itself. They point to a spate of brutal executions of regime soldiers carried out by Free Syrian Army fighters.

Some opposition fighters, both Syrian and foreign, support what they call a “Sharia” justice system, characterized by “If you kill, you should be killed,” said Ole Solvang, a Human Rights Watch researcher in Syria. “This might be influencing things on the ground.”

Such violent interpretations of Islam are angering many ordinary Syrians.

“Their leaders are from outside Syria. All of us don’t like Jabhat al-Nusra because they’re a branch of Al Qaeda,” said Abu Fowaz, a civilian working for a local military council in Aleppo. “They consider anyone who works in government to be an atheist. We are moderate Sunnis. But this war has opened the doors to outside opinions.”

Omar, 19, an earnest young activist from Bustan al-Qser, however, represents the group’s growing influence on average Syrians. He says he supports the organization.

“They are here to show us Islam, but step by step,” he said.

Other Syrians are just grateful for whatever help they can get in their effort to topple Assad.

“They are working with us hand in hand,” said Abu Ahmed, the activist from Salahadin. “We need everyone in the world. They are not Al Qaeda, they’re Syrian people.”

It’s hard to tell just how many of Jabhat al-Nusra’s members actually are Syrian, or even how many of them there are in total. Estimates range from the hundreds to the thousands.

GlobalPost spoke with fighters from Uzbekistan, Turkmenistan and Turkey in a Syrian border town last month. They were a small group of about 20 looking to join the front line fight against Assad.

“I need to kill (regime troops) and then I want to die,” a Turk, who called himself Saif Al Islam, or “Sword of Islam,” said.

The group of foreign fighters prayed for “victory over our enemy Bashar … to grant us martyrdom … to invite us into heaven …” and, “to free all the arrested Muslims in Syria.”

But in the final accounting, many Syrians believe the majority of the country is simply too moderate to be swayed by extremists.

"In the end our people will save us," said Adam, an activist who has spent most of his life living outside Syria but who returned to work for the rebels. "Syrians want to smoke. They don't want to cover themselves and do all the things that Al Qaeda wants them to do. Our people just want to open their shops again."